JP was born in Seoul, South Korea and was adopted at a young age to an Italian family in Rochester, New York. He then went to study at Rochester Institute of Technology. He also has his own YouTube channel JP Talks, where he does vlogs, challenges, and reviews. He also has another account named JP Lambiase, And as of 12/16/19 (or 16/12/19) Has abandoned the account for Hellthyjunkfood, but has uploaded 2 videos in the past 12 months.

Julia grew up in New York. She received her bachelor's degree from State University of New York College at Oneonta. She also has her own YouTube Channel JULIAYism, where she uploads short recipes, pranks and vlogs. 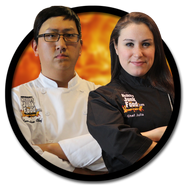 This page was created by Purzyckij on January 9, 2017.

Retrieved from "https://youtube.fandom.com/wiki/HellthyJunkFood?oldid=714751"
Community content is available under CC-BY-SA unless otherwise noted.