Warning!
This article, IShowSpeed, may contain material that is disturbing, such as sexism and rape jokes.

Darren Watkins Jr. (born: January 21), better known online as IShowSpeed (or simply Speed or Speedy), is an American YouTuber from Cincinnati, Ohio. He's known for his gaming and entertainment livestreams and for gaining over 1 million subscribers in a matter of days in 2021. He started to gain fame when his fanbase started publishing memes about him on TikTok.

Darren first created his account on March 21, 2016, and published his first video on December 21, 2017. He did his first livestream, about Fortnite, on December 28, 2018, but barely averaged with 2 viewers. Since the beginning of 2020, he started uploading and doing livestreams about the video games NBA 2K and Fortnite Battle Royale. He was growing slowly at a daily basis to a point where, in June 2020, he averaged about 10 viewers in his livestreams and 150 new subscribers weekly.

Darren is particularly known for his overwhelming rivalry with Talking Ben from Outfit7's Talking Tom & Friends franchise, mostly arguing through the telephone feature from Ben's "Talking Ben the Dog" app. Usually, he will ask Ben if he supports Black Lives Matter movement,[1] the LGBTQ+ community,[2] or other unusual questions.[3] Darren's rivalry has since become a famous meme on the Internet. Darren would also make videos with Angela and Tom, characters from games similar to Ben's. He also has a number of videos about him playing virtual reality (VR) games while wearing a headset.

In the beginning of 2021, Darren started to gain around 1,000 subscribers weekly and 350 viewers in his livestreams, growing consistently until surpassing 100,000 subscribers in April 2021. Between May and June of the same year, Darren's fanbase started uploading clips from his livestreams and memes on TikTok, which helped Darren surpass 1 million subscribers in June (and eventually also surpassed 1.1 million subscribers). After the rise to success, Darren started collaborating with various music producers and started making songs, such as Shake (2021), Bounce That A$$ (2021), Dooty Booty (2021), and God Is Good (2022).

Darren's content is mostly based off of his past livestreams recordings, and the very few actual videos he makes are simply short clips of him doing announcements to his subscribers. In his livestreams, he mostly plays PS4 videogames such as Fortnite, NBA 2K21, and Five Night At Freddy's 4, while speaking and interacting with his viewers. Since early February of 2022, Darren has been known to play a bunch of Outfit7's games (particularly the ones associated with the company's Talking Tom & Friends franchise) on BlueStacks.

Darren's "way to do things" is very unusual, considering he sometimes barks, roars, or shouts at the webcam for no reason at all. Ever since his "peak of glory" began, his livestreams consist of him reacting to the subscriber counter reaching certain numbers. Darren also produces music, particularly fast-paced rap songs. His most popular is currently Shake, which has gained 40 million views in the first 3 months since its release on November 2021.

Darren has a younger sister who sometimes enters his room during his livestreams to tell him "goodnight", or to interact with him. He also has a younger brother, and he is currently attending high school, though he clearly shows his hatred for it.[citation needed]

Though mostly unconfirmed, he formerly dated Ermony Renee, also known as Dream (not to be confused with the Minecraft YouTuber), despite there being a bit of a rivalry between them. It's unknown if they are still dating, but it's also possible that Darren has had a relationship with TikTok star and singer Ava Barbie, who is transgender.[4]

Darren's real age is currently unknown; an argument among his fanbase whether if he is 19 (born in 2003) or 17 (born in 2005) ensued, partially due to the jokes he made regarding minors. Darren said he was 19 most likely so he could get a better chance at Discord dating competitions, but besides that he wouldn't say his actual age at all. However, on a video he published on December 22, 2020, of him doing a Q&A, he said (at the time) he was 15, turning 16 "in a minute",[5] thus making this argument technically useless.

NOTE: It is also worth noting that Darren may be purposely lying about his age, as he is either trolling his audience to confuse them, or he may not want to reveal his actual age.

On December 13, 2021, Darren was on a live dating show on Adin Ross' Twitch channel. On the show, there were several women and men who were asked several questions related to dating. Darren asked a woman named Ash.Kaash that if she would reproduce with him in order to keep the population going if they were the last two humans on Earth. When Ash said she wouldn't, she stated that their kids would have to perform incest in order for them to continue afterwards. Darren then asked "Who gon' stop me", and started repeating the phrase in a more aggressive tone after Ash said that she would stop him.

Darren temporarily left the stream after Adin told him to calm down. However, not long after Darren was able to re-enter the livestream, he went on a sexist rant, calling Ash a "bitch" and an "ugly fucking cunt". Darren then yelled to Ash that he masturbates to her "every single day", before continuing to berate her, saying that nobody wants her. Adin forcibly removed Darren after his rant, although Ash did not seem too phased by Darren's rant, and was even smiling.[6]

After this incident, clips of his rant became viral on Twitter and on YouTube, causing Darren to receive major amounts of backlash, with many accusing him of being creepy and sexist.[7] Many fans of Darren defended him, stating that he was only 16 (possibly 18) at the time and he jokes like this often. However, some people like Tipster have actually questioned why Darren was on an E-dating show at 16 (possibly 18) years old to begin with. Although nobody responded to this question, many agreed Darren took it too far.

The day after, on December 14, Darren's Twitch account was permanently banned because of this outburst, with him tweeting out an image of the ban message he received from Twitch, being captioned "Bye".[8] Despite the backlash that he received, Darren's channel growth and popularity were not hindered by this, and has continued streaming on YouTube after his Twitch ban, although he and Adin seem to be interacting less than before the drama.

While Darren was playing with a girl and others in a game of VALORANT, he went on another sexist rant. The next month, he was banned from VALORANT for 30 days, but on April 6, 2022, a YouTuber and E-sports news reporter named Jake Lucky tweeted out the clip where he was sexist to the girl.[9] A Riot Games employee named Sara Dadafshar replied to Jake's tweet, saying that Darren is now permanently banned from all of Riot Games and thanking Jake for his tweet.[10][11]

After Darren apologized for his rant, many on Twitter began to accuse Jake of being "racially motivated" to get Darren banned from Riot Games, and Keemstar said Jake was hypocritical for also endorsing "trash talk" in video games.[12] xQcOW replied to Keem, saying he was "pretty rich to try to use the racism card while overlooking blatant sexism", insinuating that Keem should not defend Darren if he thinks his rant was considered "trash talk".[13]

As the drama worsened, criticism towards Jake escalated to the point where he received hate comments and even death threats.[14] It is currently unknown if the drama has already been resolved, or if it still continues.

Buff Herbert and Speed in a bathroom stall. 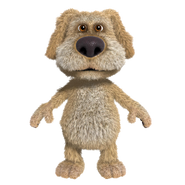 Talking Ben, who is Speed's "enemy".

Speed gets mad at Ben.

Speed gets revenge on Ben.

Speed finds a camera in a Ben Plush.

Speed in his God is Good music video.

Speed in his Bounce that A$$ music video.