Alex ran two podcasts; they were called The Camp Cast with his friend James Marriott and Happy Hour alongside JaackMaate and Stevie. He now runs his own podcast called Internet Sensation. He is also a member of the Eboys, along with James Marriot, WillNE, and Memeulous.

Alex is known for making videos on popular YouTube topics or controversies, and of people who indirectly mention him in videos (KSI likely being the biggest example). He has had a number of popular series, including "We Watch..." with fellow E-Boy member James Marriott, and reacting to episodes of TLC's "90-Day Fiance".

Alex started doing YouTube in 2013, and he used to make FIFA videos and other gaming videos. In 2016, he started to do commentary videos, mostly on other YouTubers or people. He gained popularity very fast, especially in December 2016 and January 2017, when he gained 65,000 subscribers in two months. His channel growth from late June to September of 2019 had stagnated, but has grown faster since then.

In May 2019, James Charles was accused of being predatory to straight men by Tati Westbrook. At the time of James' video "tati" still being available, there was not enough information about the situation, but Alex and many other YouTubers decided to side with Tati. In his video "My Experiences With James Charles," he claimed that there was a lot of "evidence" that proved that he was guilty of it. (He also partially defended James Charles in a subsequent video) After James' video "No More Lies" came out of him debunking the allegations, Alex apologized to Charles after this.

On June 10, 2019, Slazo's ex-girlfriend, Chey, made a post on TwitLonger, explaining that she had a relationship with Slazo, but the relationship was toxic, including her claim that Slazo was "emotionally and sexually abusive." Due to these allegations, YouTubers like ImAllexx, Kingani, and Weest came out in support of Chey. However, when Slazo showed evidence that Chey's allegations were a lie, ImAllexx and many others still sided with Chey and made various tweets, defending Chey and claiming Slazo was "manipulative".[1]

The podcast series Baited (featuring Keemstar, Colossal is Crazy and the return of Tommy C's SFTP) uploaded an episode where all three hosts criticize ImAllexx for his behaviour on YouTube.[2] Kavos, who is not in good terms with ImAllexx, also made a video criticizing him for his handling of the situation.[3] The last tweet that he made about the situation was a statement clarifying how he actually felt about the situation and why he got involved. The drama ended up damaging ImAllexx's reputation so greatly that very few commentators would align with him.

In 2017, ImAllexx, ElvisTheAlien, and BionicPig accused Zaptie of being a "sociopath," and a "pedophile." ​​BionicPig and ElvisTheAlien have Apologized to Zaptie but Alex hasn't spoken about the situation yet. Turkey Tom goes into detail here.[4]

Alex is bisexual. He came out as bisexual in his video #ProudToBe With Chris Ray Gun.[5]

Alex dated the YouTuber kingani in 2017. They shared a channel that reached 16,000 subscribers before it was deleted due to them breaking up.

In a Happy Hour Podcast, he revealed his troubles with an eating disorder. He revealed that he "woke up one morning" and suddenly, inexplicable, felt revolted by the idea of eating, and would physically gag at trying to eat anything other than chicken nuggets. He disclosed details of him feeling like it was "the end of the world", and was referred to a therapist by his mother for the issue. He did not disclose the current status of his eating disorder.

Alex has diagnosed Depression and referenced on a now deleted twitch clip to him possibly having Borderline personality disorder (BPD) / Attention-deficit/hyperactivity disorder (ADHD) but not being able to get it checked out due to coronavirus / private concerns.

Alex is a victim of sexual assault.[1] 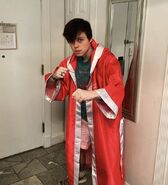 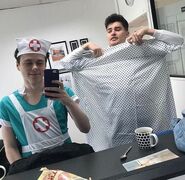 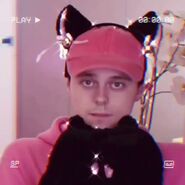 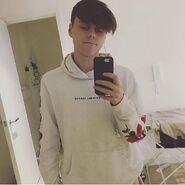 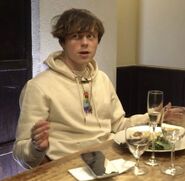 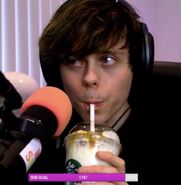 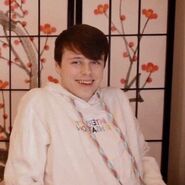 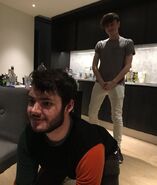 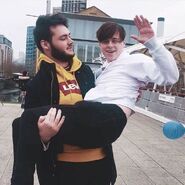 alex in a bunny hat 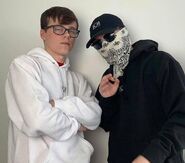 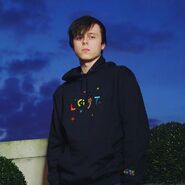 Alex and his dad (to his right)