Julia's career began in 2005 as a host and interviewer for Rockworld TV, where she also wrote and produced the channel's review show Rockjaw.

After leaving Rockworld TV, she wrote and hosted the gaming show Gameface for Bravo TV as well as writing and hosting The Blurb for Ginx between 2009 and 2012.

Several videos from her time at Rockworld and host Gameface are hosted on Julia's channel.

Aside from her TV work, Julia has worked as a DJ hosting for Total Rock between 2010 and 2012, and since January 2016 has hosted a monthly gaming show on BBC Radio 1, as well as writing columns for various national newspapers and gaming magazines.

The most prominent content on Julia's channel is her series I'll Play Any Crap, where she does Let's Plays of Xbox Live indie games of...shall we say questionable quality, such as Massive Cleavage vs Zombies, The Sexy Exorcist, Shark Attack Deathmatch, Tokyo Hosto, The Undead Syndrome 2 and many, many more. 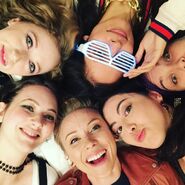