JODisHere (or just Jod) is an American YouTuber who makes livestreaming videos who spams stuff in famous YouTubers' comments, mostly for 10 hours. It is speculated that he uses subbots, which that could explain that his channel got a huge amount of subscribers. He claims that the subscribers he got are his inactive subscribers, which some of them take them as false information. If you search up “mr dank” the first result will be his channel. It is believed that mr dank gave his friend the account since it was inactive and deleted his videos for him. He had popular meme videos before giving the account away, explaining his subcount. The proof can be found in a video created a small YouTuber named "GrouchyMuffin" and checking the comment section.[1]

His first video in history is him building MrBeast in Minecraft for 10 hours.[2] He currently resides in New Jersey.

In his channel trailer, "Why do I see your comments everywhere on youtube JodIsHere?",[3] he claimed that he used YouTube back in July 12, 2009.

He started livestreaming on around late 2014/early 2015, streaming himself playing "Counter Strike: Global Offensive" (for 12 hours, sometimes 24 hours in a row). He thinks that streaming for hours would get him more viewers, getting him to the point where he streams every day on around the middle of July 2015 to the end of the summer (around early September). Jod stopped streaming completely because he got a "shit-ton of friends" and he thinks it's awesome.

Spring of 2016 came along, Jod returned to livestreaming with the same game, with each of them being a failure.

In early 2018, he got himself into a car accident, leading him to have PTSD. This let to Jod to not get out very often because it "involves being in a car". As of today, he doesn't have PTSD now.

He ended up having a lot of free time, letting Jod to getting into streaming countless 30 hour Overwatch gameplays. He would stream on Twitch. He streamed every day for 6 months.

He later took a break and did boxing because he "wasn't feeling that well".

In early 2018, he started doing so-called "weird" livestreams, which he claims are "kinda influenced by MrBeast". He tried livestreaming himself saying "MrBeast" 200,000 times, which he thinks he got over the limit (over 30k or 50k) at a 27-hour mark. He also streamed himself playing Fortnite.

In early 2019, Jod streamed himself playing Minecraft, building words and names for 10 hours. He did five/six of them. He later set these videos to Private. He later stopped doing them because he felt very sick (on around late 2019). He thinks that he is allergic to honey, because he ate a lot of them. A month later after he stopped, he later feels a little bit better (which according to him, is 50 percent), and he came up with the idea to comment for 10 hours. These streams ended up with better results, leading him to do more. He streamed for almost daily on a 2 or 3 weekly basis. This let Jod have a bad reputation on some parts.

However, as of today, he stopped doing commenting livestreams.

On February 29, 2020, he started a new channel where he could use for livestreams.[4] He originally came up with the name "JODhasHerpes" because its his Overwatch username. Jod later disregard that because he "doesn't want anyone thinks that he got herpes". He later came up with the name "HitlerIsHere" because it was a running gag that his viewers/subscribers keep on voting Hitler (or something similar) on his polls. He later changed the name to "JODhasHerpes".

On February 14, 2020, Jod made a video named "Wobba Wobba",[5] where he started which he claimed to be a "Great Value version of Oh Yeah Yeah", with the picture of the Pokemon Wobbuffet (shown below), make it the viewer's pfp, and comment "Wobba Wobba" on random videos (which they watch). This video gained a lot of dislikes, and with comments saying that he is trying to be a "Leafy clone", etc. Jod also made a lot of parodies revolving around "Wobba Wobba", which they also got tons of dislikes. This also led him to have a bad reputation. 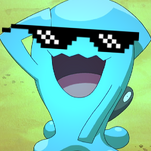 The picture.
Add a photo to this gallery

Retrieved from "https://youtube.fandom.com/wiki/JODisHere?oldid=666380"
Community content is available under CC-BY-SA unless otherwise noted.