John Smith (born: August 12, 2000 (2000-08-12) [age 21]), better known online as JOHN ROBLOX and GDILIVES (formerly SWAGER21), is an American gaming YouTuber known for his Roblox videos. He mostly does gameplay videos, with a commentary that is advertiser-friendly but very loud at certain clips.

JOHN ROBLOX is his main channel. Here he uploads his content he is the most known video content related to various ROBLOX games such as Tower Defense Simulator and Arsenal. He used to swear on this channel, but doesn't anymore, most likely due to his viewers mostly consisting of children. Although, he sometimes in his older videos said mild swear words like "Dumba**".

okaythisisepic is his second channel, he mostly posts meme videos from his first channel. He swears almost in every video he posts on this channel.

As of November 2021, he said that he wouldn't be posting videos in this channel.[1]

GDI is his newest channel. He mostly uploads videos he claims are lower quality content that he doesn't want to upload on his main channel And that are for more "Mature Content". 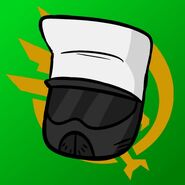