His channel has spawned many series including Yesterday, I Asked You (YIAY), JackAsk, Your Grammar Sucks (YGS), and Royalty Free Christmas Songs. His YIAY series has spawned several mini-series including Fake Facts, Roses are Red, Fix ___, and Spook Me Up each October.

His channel has generated numerous inside jokes such as his large forehead, references to Kidz Bop and Shrek, the usage of the Nepal flag, and his obsession with Garfield and The Emoji Movie.

He often refers to his fans as his "famsquad" and "squadfam", as well as "biches" (using the German "ch" pronunciation) in reference to his series Your Grammar Sucks. He is known for using the phrases "Twitter for Android", "me me big boy", "light switch", and "protein shake" among numerous others.

Jack was born in Columbia, Maryland, United States and graduated from American University with a major in film and a minor in music theory. He began to make videos in college, but he did not become famous until he created a parody of a snuggie commercial years ago, titled "The WTF Blanket (Snuggie Parody)", which has millions of views on YouTube and was even featured on the news. Since then, Jack has created many videos that are parodies, music videos, and sketches. His parents are Catholic.

This series, abbreviated as YGS, features Jack making fun of Facebook posts, YouTube comments, and Tweets with bad grammar and misspellings. Jack claimed that YGS will be uploaded every Friday, which since became a running joke due to lack of YGS content in recent times.

The 100th episode, YGS 100, was a 1-hour long special featuring animation, music, and 52 other YouTubers. The trailer was released on October 30, 2015, and the full-length episode was released on November 20. Jack has announced that there will be no more YGS specials so that he will be able to focus more on his parodies, music videos, and sketches.

The series was on a hiatus for nearly a year until on November 24, 2017, he made YGS #113. And on December 2, 2017, the #114 episode. The series has now continued and is collecting photos for new episodes, while in 2019, Jack created a poll on his community post to bring back YGS fully. He has planned to release new YGS episodes every end of the month for 2020, which he kept up, but later decided to end doing YGS in total, as he was getting bored of it and wanted to do other series.

On May 7, 2021, he uploaded YGS #128, announcing the return of the series and promised that it will continue to upload on its supposed schedule (every Friday) in a blind format.

Jack has a Q&A style series called JackAsk (the title is a spoof on the MTV series Jackass), which he attempts to upload every Wednesday, but this schedule is inconsistent. In these videos, he parodies Q&As by answering both serious and facetious questions in sarcastic and humorous ways.

On October 21, 2020, Douglass announced on Twitter that he was ending his long-running series JackAsk after 125 episodes after growing tired of the format,[3] saying that the lack of variety was "killing him".[4] It initially ended on October 26, 2020,[5] but on May 12, 2021, he brought back the series with a new 'blind' format to keep it fresh.

The PMS series title is an acronym for "Parody, Music Video, Sketch". He does either one of these in each episode of PMS. Ever since YGS 25, he has sometimes made either a music video or sketch for certain YGS.

A parody series of popular YouTube Let's Plays. Jack takes on the persona of GamerGod88, a character that seems to be awful and unknowledgeable in the field of gaming. GamerGod88 also has a distinct voice that makes the character unique to the regular Jack, sounding dumber and more immature. The most popular GamerGod88 videos are fake Let's Plays of Flappy Bird, God of War, Minecraft, and Five Nights at Freddy's, and a fake game called "Undress the Girl". Occasionally the show features guest stars such as Markiplier, Tobuscus, MsBreezy, Olga Kay and McGoiter. A new episode hasn't been uploaded since October 25, 2014.

His wife Erin has been nicknamed "GamerGirl1616" in correlation to Jack's persona.

YIAY first originated in his second channel, jackisanerd, on February 2, 2015, when he announced the name of the series. "YIAY" stands for "Yesterday I Asked You". On February 15, 2015, he announced at the end of a video that this series was going to be moved to the main channel and that it wasn't going to replace any of his other video schedules but it would simply be added on top of everything else. This series consists of Jack asking his fans a question, then picking his favorite answers to feature on the next video. He also puts a clip from the previous episode at the end of each video.

In March 2016, Jack announced that YIAY would be scaled back from five episodes a week to being posted on Tuesdays and Thursdays so he would have time to work on other series on his channel. In the 300th episode of YIAY, Douglass asked his viewers to submit verses for "Alexander Hamilton 2", a follow up to his popular parody.

In late May 2020, YIAY 500 was uploaded. It was an hour long episode with multiple questions and excerpts from his Twitch show "Are You Funnier Than A YouTuber".

YIAY LIVE is a live game show streamed on Jack’s Twitch account very similar to YIAY. There are five rounds in which Jack asks the audience a question as he would on YIAY, then he selects five answers to feature, and the audience votes by typing the number of their chosen answer in the Twitch chat. After the first four rounds are complete, the winner of those rounds compete in round five, an exclusive question only they can answer. The participant that gains the most votes in the final round is the winner and will get a prize. YIAY LIVE was first announced on August 27, 2018, in Jack’s YIAY episode "My Big, Fat Announcement. (YIAY #440)" and usually took place on Jack’s Twitch channel two times per week (Tuesday and Friday).

There are different types of questions Jack can ask for each round.

YIAY LIVE! LIVE! is a 2021 tour based on YIAY and YIAY LIVE. Prior to the tour, he held the same show before at the Teragram Ballroom in Los Angeles on November 18, 2019.

The tour was previously scheduled to be held throughout May 2020, but the COVID-19 pandemic forced to have the tour rescheduled. The rescheduling of the tour was announced in a video on May 1, 2020. The tour was later rescheduled a second time, with the new dates announced on April 20, 2021. It finally started on November 8, 2021 on Varsity Theater in Minneapolis and ended on January 22, 2022 on Aztec Theatre in San Antonio.

A series in which Jack jokingly "fixes" or "improves" submitted pictures (Fix your Pix [sic]), Twitter bios (Fix your Twitter Bios) as well as some one-off episodes. This series was brought out in YIAY occasionally, with videos such as "Fix your Life".

A series where Jack plays Fortnite. The videos about the series appeared to be highlights of Jack's streams. He occasionally plays Roblox at times.

It was announced on YIAY #481 that he would start the series by subscribing to him,[6] which he did on September 20, 2019.[7] However, the series was most likely a one-off and there wasn't any new episodes since.

An annual series where Jack makes some joke songs mostly related to Christmas. It started on December 10, 2014, and there have been 8 episodes, with the latest one being uploaded on December 22, 2021.

Other projects and channels

Jack is well known for his collaborations with other famous YouTubers. These include RoomieOfficial, Tobuscus, SeanKlitzner, DailyGrace, PewDiePie, TheFineBros, McGoiter, and many more. He worked with the Fine Brothers, acting as "Intern 2" on their show, MyMusic.

Jack has worked with his closer YouTube friends, Tobuscus and Sean Klitzner to create the musical group, "The Sideburns Crew", having two songs out (not including the YGS 100 song). "The Sideburns Song", which was uploaded to Tobuscus's channel and "The Valentine's Day Song", uploaded to Jacksfilms.

Jack also has 4 other channels: "jackisanerd" where he posts up vlogs and "SHUTUPDENNIS" for his more random, quicker videos, although he never seems to use the latter channel anymore. He also has a channel where he posts short scenes from other videos, called "catlvr6969". He also owns another account called "featuredfridays" which is where he did his featured channels instead of in the outro.

Jack used to be a contestant on a game show called Photobomb, which he hosts. The game show is featured on the Door3 channel. He has also begun hosting a series called Jack Talks Trailers on the Regal Cinemas channel.

As of 2017, there is a piece of "drama" going on between him and popular YouTuber PewDiePie. The drama consists of the two arguing over who created such terms as "squad fam" first and who copied who: PewDiePie with his series LWIAY (Last Week I Asked You) and Jacksfilms with his series YIAY. Of course, both of the parties are friends and Jack was the one to both make YIAY and use the term "squad fam". They both enjoy the hate they get from the opposite parties fans not understanding the joke, going as far as to start fake arguments on Twitter.

Be Funny Now is a competitive party game released on May 17, 2022 developed by Galvanic Games and New Beings, and published by jacksfilms himself. In this game, players write and draw their funniest answers to an ever-growing list of hundreds of questions, and then judge their peers’ work. Players can play with friends in private lobbies, or get started immediately in a public lobby for 2-8 player action.

It is available for free on computers (via Steam) and phones. Unlike most free-to-play games, it will be free from any microtransactions and/or cosmetics that help you win the game.

Jack has released many songs, too many for my poor editor work ethic to count, but his latest release was Mansion, which he wrote with his wife Erin. Cool? Cool.

He is currently married to Erin Elizabeth Breslin (since April 21, 2018), his longtime girlfriend. Jack and Erin met in December 2012, and he proposed on their fourth anniversary at the place they first met. Jack's content usually has him ironically making fun of current trends in some shape or form. Erin is a fan of the musical "Hamilton" and is known to sing numbers from the show for elongated periods. This likely led to Douglass making his "Alexander Hamilton" parody in late 2016.

Erin and him own three female toy American Eskimo dogs, Klondike, Sundae, and Chipwich (the latter dog's name was revealed in YIAY #501).[8]

Jack previously dated Kristen Klessig. She is almost 30 years old, and works as a bar waitress part-time. She lived in Maryland while Jack lived in California. They maintained a well-rounded long distance relationship before breaking up in late 2012, stated in a video named "We broke up".[9] She was featured in many Jacksfilms videos, most frequently at the end of videos. Usually, Jack would introduce himself and when Kristen would try to do so, he would interrupt her.

Klondike inspired Douglass to create a new line of merchandise, Be a Klondike, a semi-satirical dig at Logan Paul's "Be a Maverick" clothing line, featuring images of the Eskimo dog. 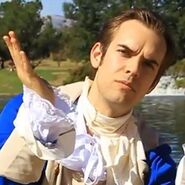