[[4]]
Jaiden (​born: September 27, 1997 (1997-09-27) [age 24]), better known online as Jaiden Animations, is an American YouTuber, animator, artist, and comedian who creates story-time videos and animations about her life, and speed-paints. She also creates video game-centric animated videos. She has another channel called Jaidenhere, however its only public video is an early version of JaidenAnimations the Anime.

Jaiden was born and raised in the U.S. state of Arizona, and later would move to Los Angeles, California. Her mother is Japanese and her father is German, but both of her parents were born in Canada. Her mother's side of the family still lives there, and she states that when she lived in Arizona, her family would visit their Canadian relatives every summer because, "We like seeing them and they're really great, and yeah, we don't like to live in a VOLCANO.". One of these visits led to Jaiden making the video "I Tried to go to Canada and Got Stuck in Minneapolis". She has family on her father's side that lives in South Lake Tahoe, and Jaiden also has a younger brother named Jax, who has appeared in a few of her videos.

During her childhood, she enjoyed drawing and playing casual video games. As she grew older, she began participating in competitive sports, such as tennis and karate; she also took music lessons, such as piano and violin, and learned the recorder through compulsory school lessons. She follows a vegan diet, which is most likely due to her concerns about how animals are treated in farms.

Jaiden is shy and tends to be nervous when interacting with people, although she is quite kind and considerate. She talks about these traits in many of her videos, the most notable one being “Why I Don’t Have a Face Reveal," in which she also talks about her problems with self-consciousness and body dysmorphia. Her music video "Empty" made with Boyinaband touched on this further, detailing her struggle with an eating disorder. In a video titled "Anxiety is the Greatest! (jk it can go jump off a microwave)," Jaiden talks about her struggles with both anxiety and depression.

Jaiden took part in MrBeast's 100k YouTuber Battle Royale in a team with TheOdd1sOut and Anthony Padilla. She fired the winning shot for the team and won $100,000 (Each team member received $33.33k and a penny was donated to charity).

She was invited to make an animation on YouTube Rewind 2017, with her animation being in the video's credits. In the 2018 Rewind, Jaiden appeared in one of the scenes with PewDiePie's chair, recreating the "BUT Can you do this?" meme. After a few hours, fans also spotted several references to various memes such as "sub 2 PewDiePie," "Somebody toucha my spaghet," (though people thought it was B*tch Lasagna and she said it could be either), KSIvsLogan, Ugandan Knuckles, Smash Bros letter, "Sociopaths 101" (a reference to Jake Paul or Shane Dawson, but it was too small to read), and Ari. Many fans believed her part to be the only good part of the video, as the rest of the video was heavily criticized.

Jaiden appeared in TheOdd1sOut's card game Cafe Chaos as a card in the Animator's Pack. A Limited edition pack Only available from supporting the kickstarter. She is portrayed with Ari, who is comically cursing.

She took part in a YouTube gameshow that was hosted by CallMeCarson, and later collaborated on a Minecraft video with him. This video was later unlisted following controversy aimed towards Carson.

She is close friends with many fellow animator YouTubers on the platform such as TheOdd1sOut, TimTom and SomeThingElseYT, forming a gang called the Boise Squad. The previous Animation Squad, however, included herself, TheOdd1sOut, ItsAlexClark and TonyVToons. Rebecca Parham from Let Me Explain Studios is also a close friend to Jaiden Animations, but she isn't in either gang.

She has mentioned that she's been on dates on multiple occasions in the past, although her dating life as a whole is currently kept private. In a livestream, she stated that she does not consider herself "fully gay" or "fully straight," also mentioning that, while not impossible, she finds it "very hard to [...] romantically like people." [1] On March 20, 2022, she made a video titled "Being Not Straight" where she revealed that she was aromantic and asexual.[2]

Ari often pushes stuff off tables, throws strawberries, and screams a lot. Ari also has a habit of singing along to songs, although in Jaiden's words he "has no rhythm and is pretty tone-deaf."

At the current moment, Ari's gender is unknown. Male and female green cheek conures look very similar and are almost impossible to tell their gender without a DNA test, which Jaiden mentions are too expensive for her to feel comfortable paying for. Some sources say that Ari is female because of the color of their cere (the pale area above the beak), however, this is incorrect because those sources confuse Ari as being a budgie, a different kind of bird. In fact, Ari is likely a male because it has been shown that many male green cheek conures have gray/black feet, while many females have pink feet.

Though it is still unknown how reliable that method is. Some people consider Ari a boy as Jaiden sometimes uses male pronouns for Ari like him or he. She also jokingly calls other parrots Aris, like "caring for an Ari can be hard" and "you have an Ari?"

The very first video that Ari appeared in was the "New Member of the Family!" video. She/he has also appeared in "Ari's First Christmas feat. Weeaboo Misaki," "Happy Birthday Ari!," "Living with Ari," "Ari's Birthday! (again)," "Throwing Ari a Birthday Party," and the behind the scenes of her music video "Empty." Ari has been featured in many merch items, such as T-shirts, stickers, and plushies. Jaiden's merch line 'Arigato' was most likely named after Ari.

Tofu (born: June 20, 2019 (2019-06-20) [age 2]) is Jaiden's pet, adopted by her during October 2019. She revealed the bird's existence on a charity stream for United Way.[3] Unlike Ari, Tofu is a confirmed female, as the breeder sexed her. In MrBeast's Creator Games, there were two bird cages shown in the room she was streaming from, which suggest that Ari and Tofu are kept in separate cages. 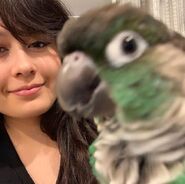 Jaiden with her bird, "Ari" 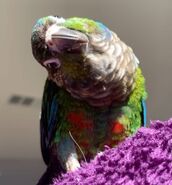 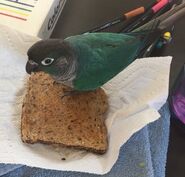 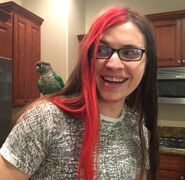 Jaiden with Ari and new bird Tofu in her charity stream.