Jawed Karim (born: October 28, 1979 (1979-10-28) [age 42]) is a German-born American technologist and co-founder of YouTube of Bangladeshi-German descent. Many of the core components of PayPal, including its real-time anti-fraud system, were designed and implemented by Karim.

Karim was born in East Germany to a Bangladeshi father and German mother, but he crossed the Berlin Wall and grew up in West Germany. He moved to the United States with his family in 1992, two years after German reunification. He graduated from Central High School in Minnesota and he attended the University of Illinois at Urbana-Champaign. He left campus prior to graduating to become an early employee at PayPal, but continued his coursework, earning his Bachelor of Science in computer science in 2004.

While working at PayPal, he met Chad Hurley and Steve Chen. The three later founded the YouTube video sharing website in 2005. YouTube's first video, Me at the zoo, was uploaded by Karim on April 23, 2005.

After co-founding the company and developing the YouTube concept and website with Chad Hurley and Steve Chen, Karim enrolled as a graduate student in computer science at Stanford University while acting as an advisor to YouTube. When YouTube was acquired by Google, Karim received 137,443 shares of stock, worth about $64 million based on Google's closing stock price at the time.

In October 2006, Karim gave a lecture about the history of YouTube at the University of Illinois' annual ACM Conference entitled YouTube: From Concept to Hyper-growth. The lecture material also contained pictures and videos of Jawed, Chad and Steve from the garage days of YouTube. Karim returned again to the University of Illinois in May 2007 as the speaker at the university's 136th commencement.

More recently, Karim has launched a venture fund called University Ventures, with the goal of helping current and former university students to develop and launch their business ideas.

Jawed also showed disdain for YouTube's newest update where the dislike count was removed. He updated his description of "Me at the zoo" twice, the second update explaining in great detail his thoughts. He also commented on PewDiePie and Marques Brownlee's videos on their thoughts, saying "Removing dislikes is the dumbest idea since 2006." On the Update to YouTube's dislike count, he commented, "Matt doesn't look excited because he knows it's the wrong decision." 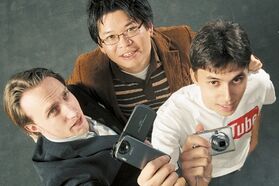