Josh Allen (born: August 17, 2000 (2000-08-17) [age 21]), better known online as Jawsh, is an American YouTuber and streamer on Twitch who is known for playing video games like Minecraft or Super Mario 64. In Minecraft, Jawsh is known for playing on the Minecraft servers SMPLive and SMPEarth, both of which included many popular YouTubers & Streamers.

Josh uploads highlights from his Twitch channel where he streams a variety of games, including My Summer Car, Roblox, Minecraft, and many more games that are suggested to him by his Twitch chat. Occasionally Jawsh will do Mediashare streams, where viewers can donate to have a YouTube video play on stream.

Josh typically streams gaming content, amongst them being the occasional Minecraft stream. He used to collaborate with his friend CallMeCarson on server called SMPLive. He had a reputation on the server for having "haha funny" reactions when he got pranked/killed on the server. Carson and UndrscrMason were typically the ones pranking him. He claims to have disliked SMPLive and was one of the first to quit the server.

Josh has streamed and uploaded Super Mario 64 speedruns. He mainly plays in the 16 star category and his personal best is 18:51. Josh has also dabbled in the 70 star category and will likely resume since Jawsh has stated that he is uncertain whether he can beat his 16 star PB or not.[1] He was taught the 70 star route by Simply.

Past Minecraft and Mario 64 Speedruns, Jawsh plays a wide variety of many other games. Some of his top viewed games include Mario Kart 8, Plants VS Zombies, Various other Mario games, Coin Game, and Among Us.

Josh has uploaded a few other types of videos, such as him watching Pawn Stars on stream, and a 10 second video of him saying he is the president, and that he has adopted all US Citizens. The first 6 videos on Jawsh's channel are no longer available to the public, with 5 of them being privated, and the other being unlisted.

Josh uploads stream highlights from his Twitch channel. He streams a variety of different games. His Twitch About Section reads: "Nice." 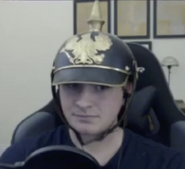 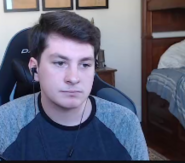 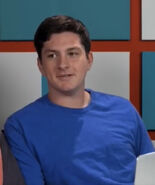 Josh on an FBE video.

Jawsh with some of his favourite FNAF characters.

josh playing in the sewer at age 7 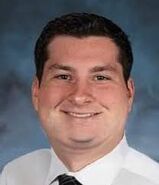