Brendan Blaber (born: June 20, 1994 (1994-06-20) [age 27]), better known online as JelloApocalypse or simply Jello, is the mastermind behind the "Welcome to" and "So This is Basically" series on YouTube, which have become very popular over the years. He is also the creator of Epithet Erased on VRV.

Jello currently resides in Dallas, Texas. In addition to posting entertaining videos on his YouTube channel, he is also a graphic designer, ADR director, producer, writer, illustrator, and voice actor, appearing in shows and games including Fire Force, Smite, Paladins, Borderlands 3, Actors: Songs Connection, and most recently, My Hero Academia: Heroes Rising as the Bandage Villain Mummy, Avi Kobo from No Guns Life, Faust from Dark Deity[1], Jack Barter from Wild Card, Roku from Agent Six and Acca from Wonder Egg Priority. He has also appeared at many conventions, including Youmacon 2016, which he hosted a panel at with his sister, Erin Blaber, known as pLasterbrain online, and Tom Laflin, another voice actor and good friend of Jello. They have all since collectively went under the name Jigglerettes. You can find Epithet Erased, which is the web series he created and wrote on the Crunchyroll-owned streaming site VRV.

Welcome To: The first video posted to Jello's channel was a video titled, "Welcome to DeviantArt", where he poked fun at the site and the community that revolves around it in a periodical manner, with a backing track from SpongeBob Squarepants playing throughout. This sparked his first popular series, followed by Welcome to YouTube, which brought him his first wave of fans and placed him on the map as an up-and-coming creator. This series includes videos poking fun at Fanfiction.net, Kickstarter, Twitter, Tumblr, Vine (His April Fools Day episode), and YouTube comments. He ended the series in 2016 with Welcome to Webcomics, which in turn introduced--

CorNUCOpia: In 2016, Jello started writing a fantasy webcomic called "CorNUCOpia". It revolves around a thief named Hiccup with paint powers that try to infiltrate a castle to steal an artifact, but his plans are thwarted when he paired up with the one person more determined than anyone to catch the mysterious thief. The comic was well received, gaining many fans in a few months. In May 2019, the comic went on a hiatus that is still in effect to this day, and it is unknown whether it will ever get finished.

So This Is Basically: The series Jello launched near the end of Welcome To's run was "So This is Basically", which was similar to Welcome To in a lot of ways, but instead of poking fun at websites, Jello poked fun at Cartoons and Video Games. These videos took a shorter amount of time to make, and Jello has said that he doesn't "totally hate" making them. During the show's run, Jello has playfully poked fun at properties such as Steven Universe, Gravity Falls, Overwatch, Pokemon, JoJo's Bizarre Adventure, RWBY, and most recently, Sonic the Hedgehog. The show's Schick is basically a guy sitting on his couch attempting to explain different Cartoons while hammered drunk, getting the premises somewhat right, but also wrong. The series is still ongoing, with the most recent video in the series centering around Trails of Cold Steel.

Reviews in 10 Words: On December 16th, 2016, Jello posted a video called "Every Disney Movie Reviewed in 10 Words or Less" which in turn kicked off a series of videos where Jello would give his thoughts about every movie a studio or franchise has put out in its lifetime, and his thoughts would be condensed into a 10 word or less sentence. In addition to the first video on Disney, the series includes videos on Pixar, Dreamworks, Ghibli, the Disney sequels, the Scooby-Doo movies, and the Pokemon movies, which had the added gimmick of singing the reviews to the tune of each Pokemon theme song. Unfortunately, the Pokemon video got claimed for copyright issues but was able to get back on YouTube due to a very clever loophole. The series ended last year, and as of now, there are no plans to continue the series due to the Pokemon video underperforming and getting copyright-striked.

Comic Dubs: During Welcome To and before STIB, Jello would recruit friends and they would dub different comics using silly voices. Some of these videos include Sailor Moon Puns, If Uno was an Anime, and they also went and dubbed a few chapters of the Webcomic "Cucumber Quest". The prologue and two chapters of that webcomic were posted to YouTube.

Anime Campaign: In 2016, Jello was the GM for a DnD style Tabletop game he called "Anime Campaign", where he would host over 6 hour RP sessions satirizing different genres of Anime. For instance, one of the arcs was western-themed, one was sports-themed, and one was "Magical Girl" themed. The very first arc Jello ran was unfortunately never filmed and lost to time; that session was a Tournament Arc, which Jello has openly said is a terrible way to start your campaign. These colorful characters and settings would eventually be rewritten and retooled into a little show called--

Epithet Erased: In early 2019, Jello pitched his condensed, animated version of Anime Campaign to VRV, and they decided to pick it up for a seven-episode long season 1. Epithet Erased is an ensemble comedy show about people with superpowers revolving around a random word attached to their soul called an "Epithet". Season 1 centers around a little girl who gets trapped in a museum overnight at the same time a group of bumbling teenage thieves breaks in to steal an artifact. According to Jello, "It's like if you took My Hero Academia and Home Alone...and made it stupider?" Epithet Erased is available to watch on VRV, but whether it is getting the five seasons it needs to tell the whole story remains to be seen, as VRV and Jello have not confirmed whether Season 2 is even happening or not. Time will only tell. However, around July 2020, Jello announced on his Twitter that he is writing the new seasons of Epithet Erased as light novel style books. As of right now, there is no timeline as to when the books will be finished.

Sweetwater: In mid-2020, Jello announced that he would be GMing a new TTRPG called "Sweetwater," a murder mystery set in the fictional town of Sweetwater, West Virginia in 2004. Jello has stated that this story would be a lot darker than his usual material, diving into adult themes including but not limited to MURDER. And that's really all that is known so far. This project will release sometime this year.

Other: In 2019, Jello made a video called "Let's make a Pokemon Game", where he puts forth a hypothetical pitch for a brand new Pokemon game, stating three theses as to what he wants his game to accomplish. It is a well-made video that already has a sequel, "Let's make an Animal Crossing Game", which dropped in March 2020. He has appeared in over 70 different projects on Youtube as well, including Zedrin's "Hiro the Dense", Slimecicle's "Detroit Become Abridged", 9Hammer's "Beyond the Fog" series, and Team Four Star's, "The Dragon Prince Season 1 in Five Minutes." He is also a member of the RPG group "Surprise Round" where he appears in the tabletop show "Windrose Everlasting" on the YouTube channel, The 3rd Wheel. Other miscellaneous videos that Jello has made include "Chef Skyrim" and "Miles is on Fire", humorous highlight reels of games he has streamed on Twitch, and "The Price is Right: Terrible Items edition," where he gathered a bunch of his friends and played a Jackbox-style version of the popular game show, "The Price is Right." There is a spiritual sequel to this video in the form of a San Japan panel bootleg which you can also find on YouTube. He has also started streaming on Twitch, and has played games such as Fire Emblem: Path of Radiance, Professor Layton VS. Ace Attorney, and most humorously, Ace Attorney Investigations: Miles Edgeworth, which in turn spawned the hilarious two parter "Miles is on Fire." A sequel titled "Miles is a Robot" was released on January 8th. That series will have five episodes, one for each case. Jello has also occasinally done streams on youtube of video games that he has worked on, such as Unicorn Tales (which he and his associates provided voice acting for) and Pizza Game (which was developed by his sister pLasterbrain).

On November 5th, 2018, Jello posted a video to his channel titled "Vote" to get people to vote in the midterms, some users saw it as an attempt to get people into voting Democrat, and accused him of "subliminal messaging" to manipulate his viewers. The video was meant to be Partisan, therefore some statements made it appear more left-leaning. After a user on Tumblr asked Jello if alienating his audience was worth it, he responded: "I lost 9,000 subscribers. That's like, 3 dollars worth of revenue. So yes, it was worth it." When this response earned him even more harassment for the misconception of seeing his viewers as revenue, he posted a lengthy twitter thread explaining why he posted the video and what he actually meant by that comment. Jello later stated he would not apologize for using his channel to express his beliefs and getting his viewers to vote. 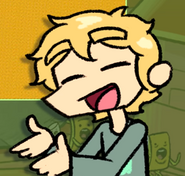 A doodle of himself 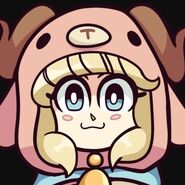 A doodle he drew for Halloween

Brendan in his car

Brendan as he appears in his 2018 voice demo reel