Warning!
This article, JellyBean, may contain material that is disturbing, such as harassment and mentions of pedophilia.

Bean was born on November 23, 2004 in the United States. She is hispanic, bisexual and uses she/they pronouns which you can see on her Twitch channel.[2][3] She is also of Mexican descent. You can check her boundaries here. Her height is 5'1.[4] She graduated high school on May 12, 2022.[5]

On March 2022, she eye revealed on her now banned TikTok account.[6]

In 2021, she made a trend in which every fan of her comments "it's not a mistake, ✨IT'S A MASTERPIECE✨" on every TikTok and YouTube Shorts that they see. Many other YouTubers such as Twi Shorts and Beesechurger 73 also participated in the trend.

Soon after, the trend among comment chains became controversial, due to it having caused excessive spamming through many TikTokers, YouTubers, and streamers. She later apologized for all the spam comments and asked her fans to stop spamming the comments to other YouTubers and streamers.[7][8]

As of now, the drama is still going on as her so-called "toxic fanbase" are still attacking multiple YouTubers who dislike the comment trend. She along with most of her fans are widely considered to be hated among the YouTube community, to the point where The Beak even infiltrated her Discord server.[9]

During a Five Night's at Freddy's: Security Breach stream, JellyBean started calling the daycare attendants pedophiles repeatedly. Many users on YouTube and TikTok have criticized her for this, saying the joke was in poor taste and harmful. On February 8, 2022 she made a response.[10]

In February 2021, screenshots of JellyBean saying slurs spread on social media. She addressed the controversy, asserting that the screenshots were fake, due to having an incorrect profile picture and pronunciation of her name.[11][12]

After JellyBean noticed Meowbahh gaining attention from the Minecraft Shorts Community, JellyBean asked in her twitter, "Who's Meowbah?". JellyBean got some replies from the crowd and later responded, "I regret asking",[13] and then blocked him on Twitter.

According to Jadyn in the video "JellyBean Was Banned...", when JellyBean started getting hate, she privated her TikTok account.

On April 1, she unprivated her account, but on the same day, her TikTok account was terminated for unknown reasons. When she found out, she tweeted out that it was a "great April fools prank".

However, TikTok didn't respond to the tweet and also on the same day, Meowbahh responded by begging JellyBean to message him and get her unbanned from the platform.

Meowbahh mentioned at the end of the tweet talking about how he wants people to get her unbanned from TikTok, she then went on to make another tweet calling her a "fucking r*tard ni*ger".

A lot of people responded to JellyBean. According to a user named @RealFoxy02016, they said "I think a bunch of the haters decided to spam report you, which really sucks, but they'll likely give you your account back". JellyBean made another tweet saying: "guys #freejellybean she has no reason to get banned off tiktok".

The tweet never took off, however, and she is still banned on TikTok as of this day. Jadyn then went on to point out here, that there is no reason for her to be banned in the first place as her account contains nothing but tame content regarding Minecraft and it doesn't even violate the Tiktok TOS. She then went on to compare her to Meowbahh as he wasn't banned yet despite saying slurs to JellyBean and on some of her videos. Jadyn's video received mixed to positive reception as some people grew aware about JellyBean being harassed. However, some people criticized her for "simping".

YouTube also commented her catchphrase under a video of hers.[16] 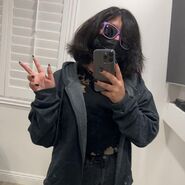