Wikitubia
Register
Don't have an account?
Sign In
Advertisement
in: YouTubers, Featured Channels, Users who joined in 2006,
and 13 more
English

Jenna Nicole Mourey (born: September 15, 1986 (1986-09-15) [age 35]), better known online as JennaMarbles, was an American YouTube celebrity, vlogger, comedian, internet personality, and blogger born in Rochester, New York. "Jenna Marbles" is a pseudonym incorporating her dog, Mr. Marbles', name. She first became well known for her video, "How to Trick People Into Thinking You're Good Looking", which gained over 5.3 million views in its first week posted. She is also known for her videos, "What Girls Do in the Car" and "How to Avoid Talking to People You Don't Want to Talk To".

Jenna, under her pseudonym, is also the host of "YouTube 15", a weekly pop countdown on the radio station, SiriusXM Hits 1. The show plays every Friday at 6-7pm EST.

Jenna first joined YouTube on April 5, 2006 under her real first and last name "Jenna Mourey". Her first video was uploaded on February 13, 2008 which was a twenty second vlog of Itchy, one of her old boyfriend's dog titled "Itchy says I love you".

Jenna made her second YouTube account in February 2010 because she had always enjoyed making people laugh. She wanted to start off fresh and she intended to use the name of her first account. However, Jenna's mother was looking for a job at the time and Jenna's YouTube channel was the top result when searching the last name "Mourey," so Jenna chose the channel name "Jenna Marbles" which came from her chihuahua, Mr. Marbles. Her channel quickly became popular, allowing her to focus on videos full-time.

She has a podcast titled "The Jenna Julien Podcast" which is posted every Monday where she, along with her boyfriend speak their minds on different topics.

Jenna has had an ongoing feud with YouTuber Jack Douglass, known by his username Jacksfilms. Most of their back-and-forth is about each other's dogs.

**This situation is developing so not all information may be accurate**

On June 25, 2020, Jenna uploaded a video titled "A Message ", where she profusely apologizes for her racism and internalized misogyny in her older videos, and the harm she has caused to people. Jenna states she has attempted to grow and change and put out genuinely non-offensive content and wholesome videos and has even gone far enough to private and delete her old problematic videos. Although Jenna has addressed her past before, and apologized, Jenna decided to address her problematic past one more time before announcing she is either taking a break or leaving her youtube channel forever in an attempt to reflect and distance herself from her past.

Jenna’s video style has changes drastically since she first began posting in the mid 2000’s. She began with shorter comedy skit and “how to” videos intermixed with the occasional rant video and Q & A video. A large section of her shorter sketch videos were part of her series in which she comedically represented what men and women might do, for example "How Girls Get Dressed," “What Girls Think About During Sex,” and “ What Boys Do in the Bathroom in the Morning.” In her videos representing boys, she wore an oversized blue polo shirt, baseball cap, and a drawn-on curly mustache. Jenna's earlier videos also included more raunchy humor and curse words than her current videos consist of.

Jenna’s more recent videos have shifted to longer, unscripted videos that focus more on her life with her boyfriend and her dogs, as well as videos about topics related to beauty, art, and other miscellaneous topics. Jenna’s beauty videos generally fall into her “Rachet Salon” series, in which she performs beauty treatments on herself (and occasionally her boyfriend) without the expertise of the traditional “Beauty Guru” on YouTube. While Jenna’s dogs have always been a staple of her YouTube channel, that have begun to be featured more in recent videos, like “My Dogs Try on Halloween Costumes,” "Teaching My Dogs How to Swim,” and “Taking Our Greyhound to the Beach for the First Time.”

Jenna alongside her boyfriend Julien Solomita, frequently stream on Twitch. They tend to play PUBG; their channel name is JennaJulien. They have 4500+ twitch subscribers.

Jenna generally has a good public image and is regarded as a genuine, caring and comedic person. However, her reputation on the internet was not always as positive as it has become more recently. She has been criticized for her “drinking, sexuality and profane humor which earned her the rap of being a potentially bad role model for her young fans.” Jenna also faced backlash for videos containing slut shaming, derogatory language and her impersonation of Nicki Minaj, after which many took her excessive spray tan as a version of blackface. However, as time passed and Jenna grew older, she clearly made changes in her videos and behavior. In her “Reacting to My Old Videos (300th Video)” she remarks that she realizes she made offensive comments in her previous videos and “said words in the past that just aren’t okay.” She mentions that she has been able to use her videos and the comment sections to see that she wants to change her behavior and grow as a person. Jenna was also praised for her lengthy apology video after uploading a video of getting fish, after which she received many comments about how the supplies she bought and the way she re-homed the fish were not healthy for them. In her apology video, she explained that she ultimately returned the fish to the store because it was the best option for the fish and she spent time explaining what she did wrong. She also kept the original video at the end of her apology video in an attempt to show people what NOT to do, in hopes that no-one else would make the same mistakes she had. This was compared to other YouTuber’s apology videos, which were often shorter and in response to what fans felt was a much more egregious mistake, for example PewDiePie’s apology video in response to saying the n-word on a live stream. Jenna is also praised for her treatment of her rescue dog, Bunny and her more wholesome, "32 Year Old Lady" content.

After graduating college, Jenna shared a $800 three bedroom apartment in Cambridge, Massachusetts. Soon after, she worked for StooLaLa, a female-based sports site that was the sister site of BarStoolSports. She also worked as a shots girl and promo model, a job she humorously described as "dancing in [her] underwear," a bartender, and worked in a tanning salon.

Jenna Marbles is in a very committed relationship with fellow YouTuber Julien Solomita. They have been dating since June 13, 2013 and moved in together sometime that year. They both frequently appear in each other's videos, if only as a voice behind the camera. Julien is a good sport and lets Jenna give him sometimes unrequested beauty treatments. Their couple's videos often focus on the fact the Julien is an Aries and Jenna is a Virgo, which are astrological signs not known to get along. Julien is known to be fun, energetic, occasionally disruptive, and loving. Jenna, Julien, and their dogs are well liked by the YouTube community overall due to their cute and clever personalities among other things mentioned. Julien revealed he proposed to Jenna and she said yes, in a livestream on twitch.

Despite being one of the most successful and richest YouTubers in the world, Jenna Marbles is seen to be an average person. She is private as well as she has a calm and humble personality. She is a home person but also likes to go on trips with her friends, Julien, family, and pets.

Marbles' second channel is JennaMarblesVlog, an extra account for extra vlogs. It is infrequently updated, but still active.

Marbles' original account, created in 2006, Jenna Mourey, consisted of extra vlogs as well. Her last video was uploaded in October 2013 where her boyfriend and her were testing out a Google Hangouts session.

Jenna Julien, is Marbles' latest account created in July of 2014 where her alongside Solomita sometimes with special guest(s) talks about various topics. Having sponsors to the podcast as well, this channel features their actual physical appearances as on other platforms they have this podcast only displays audio. 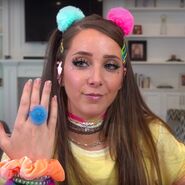 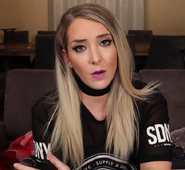 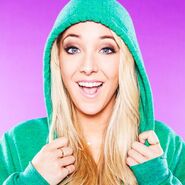 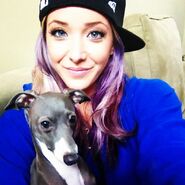 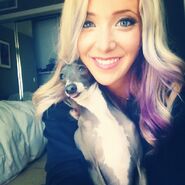 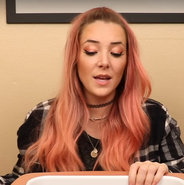 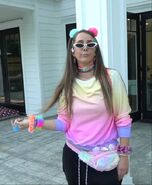 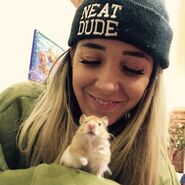 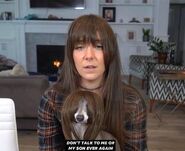