GabeandJesss has been uploading videos to YouTube since 2009. Jessica has five children, all of whom have "J" middle names, and their births were all recorded and posted on YouTube for the world to see.

At 18 years old, Jessica welcomed her first child, a daughter named Lilia Jean on June 18, 2010 at the hospital, with her then boyfriend, Gabriel "Gabe" Esquilin. After Lilia's birth, Jessica and Gabe broke up but are still friends to this day and co-parent Lilia.

Shortly after, Jessica reconnected with her future husband Drake Roque. They were married on November 11, 2011. On March 30, 2012, Jessica and Drake welcomed fraternal twin boys named Kyson James and Kaden John. She had a drug free labor and vaginal delivery in the hospital, delivering Kaden breech.

On March 3, 2014, Jessica had a home water birth and welcomed her third son with Drake named Landen Joseph. Just weeks before giving birth to Landen, Jessica and Drake separated. They are now legally divorced. Unlike Gabe, Drake is not very involved in his sons lives.

Jessica has since married Chris Skube. They got engaged on Valentines Day of 2015 and were married that following August 8. Jessica is now the stepmother to his two sons, Caden Joseph and Tommy Rae. On Easter 2016, Jessica announced her pregnancy with her husband Chris. While the baby was due on November 13, 2016, on November 14, 2016, Jessica had her second home water birth and welcomed daughter Addelyn "Addie" Jade. Had Addie been a boy, they had chosen the name Jackson Scott.

Jess got pregnant at 17 and at 18 years old Jess gave birth to her daughter, Lilia Jean on her due date, June 18, 2010 at 5:12am, with her then-boyfriend and high school sweetheart, Gabriel "Gabe" Esquilin (Dec 1991). She weighed 7lb 6oz and was 19 inches long. After 4 years of dating, Jess and Gabe broke up shortly after Lilia's birth. They remained on good terms and are friends to this day.

Soon after, Jessica reconnected with Drake Roque, an old school friend and they started dating. Jess became pregnant again with twins boys, Kyson James and Kaden John, who were born completely natural at 12:26PM and 12:33PM respectively, on March 30, 2012 at 38 weeks and 3 days gestation. Kyson weighed 6lb 9oz and was 17.75 inches long and Kaden, who born breach, weighted 5lb 11oz and was 19 inches long. Prior to the twins birth, Drake and Jess was married on November 11, 2011. Drake left Jess while she was very pregnant but was present at the twins birth and they eventually got back together.

Jess became pregnant for the third time in 2013 and at 8 months pregnant, Drake left the family again and they went on to divorce. She welcomed her third son, Landen Joseph at 41 weeks and 1 day at home in the water on March 3th, 2014 at 11:32pm, weighing 8lb 8oz and was 20 inches long. Drake was not present for Landen's birth. Drake has another child, a daughter, Airabella Dawn "Bella" born on March 25th, 2015 with his ex-girlfriend, Natalie Rose Brown. Drake used to hardly ever sees his sons, Jess has said he had seen them a hand full of times a year and him and Jess were on bad terms. However, as of June 2020 they decided to cancel their child support which Drake wasn't paying so that he can get a job and be able to take care of his kids. The boys have been spending more time over there recently and Jess is hoping this will continue on in the future.

Jess then met Christopher Scott "Chris" Skube, who had two sons of his own from a previous marriage, Caden Joseph and Tommy Rae. Chris proposed to Jess on Valentines Day 2015 and they were married on August 8, 2015. On Easter 2016, they announced via YouTube video that Jess was expecting her 5th child. Addelyn Jade "Addie" was born at home in the water on November 14, 2016 (a day after her due date) at 5:27am weighing 7lb 11.5oz and was 18.5 inches long. Her gender was a surprise until birth and was announced on YouTube a few days later. Chris raises Jess' boys as his own. In July 2018, Jess mentioned that Caden and Tommy's mom had a baby girl. However, a TikTok Tommy posted in March 2020 indicates that his and Caden's mom had a boy.

Jess and Chris have a really good relationship with Gabe and his wife, Amber (born Aug 1991) and her son Logan (born Mar 2009). In June 2018, Gabe and Amber announced via YouTube video (YouTube Channel) that they are expecting their first child together, a boy, Malakai Gabriel, due in December 2018. Malakai was born early at 34 weeks and 3 days (on November 8, 2018) via emergency c-section due to preeclampsia. He weighed 5lbs and 5oz and was 17 3/4 inches long.

In December 2019, Jess and Chris announced in a video that they will be moving their family from Modesto to Sacramento to be closer to family and be able to raise the kids in a safer area. Additionally, Jess's parents also decided to move and in January 2020 they sold their house and temporarily moved into Jess's house. In June 2020 the family moved into their new home. 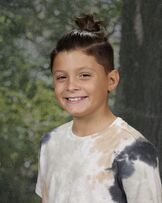 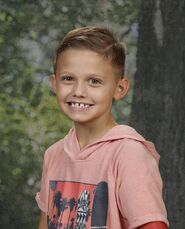 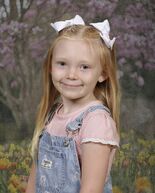 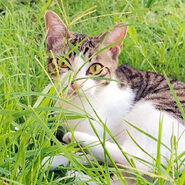 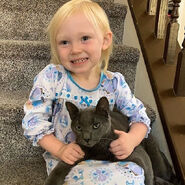 Their second cat, Mowgli, pictured with Addie
Add a photo to this gallery
Retrieved from "https://youtube.fandom.com/wiki/JesssFam?oldid=1035517"
Community content is available under CC-BY-SA unless otherwise noted.