Jim was married to fellow YouTuber Tanya Burr, who he met prior to either beginning their YouTube channels. The two got engaged on December 12, 2012 and married on September 3, 2015. The two acquired a dog, a Dachshund who they named Martha. On March 17, 2019, they announced that they had split up, after 12 years of being together.

He has two sisters, Sam and Nick, and a twin brother, John, all of whom are also YouTubers. Sam and Nick post under the channel name pixiwoo, whilst his brother posts under TheLeanMachines.

He is good friends with YouTube stars Zoe Sugg, Alfie Deyes, Marcus Butler, Caspar Lee and Joe Sugg, many of whom he has collaborated with.

Jim typically posts once a week to his main channel, on a Sunday; in addition, he posts vlogs Monday-Friday on his second channel EveryDayJim- these vlogs often feature Tanya, and his dog, Martha.

He regularly appears on Viral Trap on itv2 in the UK, with Caroline Flack.

Jim has also attended VidCon, Playlist and Summer in the City over recent years. 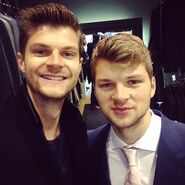