Joe Winko (born: December 5, 1995 (1995-12-05) [age 24]), better known online as Joe Winko, is an American YouTuber, vlogger, creepy-pasta narrator/writer, and amateur horror movie director for YouTube. He is best known for his self-edited version of the famous Ed, Edd, n Eddy theory/creepy-pasta story video. He is also well known for his Sims 2 horror movie machinima making skills and for his distinct red cape and red bandanna look. Although he claims to have been posting videos on YouTube since year 2005, his recent channel winko567 was created in January, 2013.

Joe Winko is a native Hawaiian orphan who resides with his adoptive parents in the mid-western region of the United States. It is mentioned numerous times in his Joe Winko Talk videos as well as his Joe Winko Horror Films that he has resided in the Dominican Republic in the past, although he did not originate from there.

Joe Winko also claims to have a mild form of autism which greatly distorts his method of thinking and his perception of life, which also gives him the ability and creativity which he puts into his videos. He is supported greatly by the comments his fans give him. Joe Winko's YouTube channel is also dedicated to his uncle Romario who passed away of brain cancer in 2012.

Since year 2005, Joe Winko has been creating numerous videos made with various computer games such as The Sims and Grandtheft Auto San Andreas. Every single one of his created videos convey dark story-lines which almost always includes himself as a character in each of them (Knifed, Trick or Treat, Slender Man's Cabin). He deceased uncle, Romario, also appears a character in very few of Joe Winko's machinima films (Knifed 7: Return to Woodscreek, Scare 2, The Car Crash). 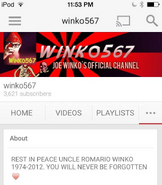 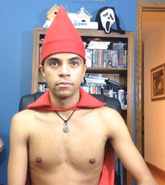 Add a photo to this gallery
Retrieved from "https://youtube.fandom.com/wiki/Joe_Winko?oldid=858486"
Community content is available under CC-BY-SA unless otherwise noted.