He was a contestant on the 22nd and 24th seasons of The Amazing Race, and has appeared in a handful of short films as well as creating and hosting Escape the Night, an unscripted, unrehearsed web series, distributed by YouTube via its paid-subscription service YouTube Premium. He appears in all four of the seasons with several other YouTubers, including Liza Koshy, IJustine, Colleen Ballinger, and Rosanna Pansino. 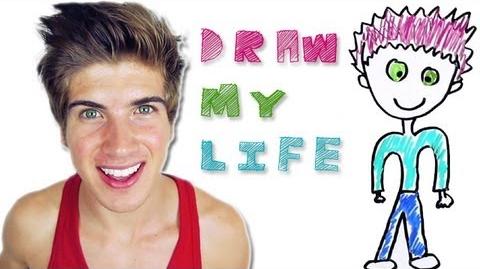 When he was around 12 years old, his mom became an alcoholic. This, of course, changed his life.

Starting in 2013, Joey was living with his friends and a couple: Anthony Padilla (Smosh) and Kalel Cullen (KalelKitten), but then moved in with Sawyer Hartman, so he would have more room. On the 10th of April, 2014, he announced he would be moving again; this time with his friends Megan and David. They were finding a house together. He stated that Sawyer had been the best roommate he had ever had and he would miss him. In April 2015, Graceffa moved once again after issues with his landlord about his dog. He moved to another house with his friend David.

He has a younger step-brother named Jett, who has Autism.

Joey used to be a part of the YouTube channel WinterSpringPro with his best friend, YouTuber Brittany Joyal. From 2007 to 2011, the duo made numerous successful videos on the channel, accumulating millions of views and becoming well known for their comedy sketches and music video parodies. In 2011, Joey and Brittany decided to move to Los Angeles together to pursue their YouTube careers instead of continuing college. On July 9, 2012, Joey officially announced his departure from WinterSpringPro in order to focus on his personal channel.

Joey appeared as Gale Hawthorne in The Hunger Games parody of Britney Spears' "I Wanna Go," which has reached 4+ million views. Joey has also released an album with Luke Conard and Meghan Camarena, known as Strawburry17 on YouTube. The album includes Hunger Games inspired songs.

In the tenth leg they traveled to Scotland. in the beginning of the race it was said that there would be another double U-Turn. Joey and Meghan where U-Turned for the second time by Hockey Playing Brothers Bates & Anthony. By the end of the race it came down to two teams, Joey & Meghan and Roller Derby Moms Beth & Mona (who also got U-Turned by Newlywed Couple Max & Katie). Joey & Meghan ended up getting eliminated and ended up in 5th place over all.

Although it have been speculated since mid October that Joey & Meghan would be racing for a second time, it was officially announced on January 27, 2014 that they would indeed be racing again. In the first leg, they started at UCLA in Los Angeles, CA. In their first challenge, they had to search through several of UCLA Bruin Marching Band members with a Chinese symbol on their Shako, which was displayed on the band conductors' Shako. Once they brought the correct band member with the correct symbol, they were given tickets to their next destination, which was them going to Guangzhou, China. In Guangzhou, teams went to the wedding boutique district on Jiangnan Avenue North and searched for one of three boutiques that had their next clue. Each store had a limited number of clues, forcing teams to travel to the others if they ran out. Joey did the first Road Block of this season, which was to dress in a special costume and, while suspended 300 feet (91m) in the air by wires from the stadium's towers, perform 5 aerial somersaults. Once complete, the wiremaster would award them their next clue. Joey & Meghan barely escaped elimination and came in 10th place for that leg.

At the start of the second leg, due to some teams receiving time credit due to production difficulties, Joey and Meghan started the leg in 8th place instead of their original starting place, which was 10th[3]. When they left, they were told that they had to go to the Chen Clan Academy, where they had to watch a demonstration of martial arts students. At the end, the "master" would approach the teams and stamp their next clue on their forehead. Meghan did the roadblock for this leg, which was to assemble a child's motorized car from a provided kit. Once the car was finished, the judge would give them their next clue. Once given their next clue, teams had to donate the car they just built to The Guangzhou Children's Activity Center, where they would receive their next clue. In the detour, Joey & Meghan had a choice to either play a game of Jianzi (a game similar to hackeysack but you use a shuttlecock instead of a ball) and once the teammates successfully volleyed the shuttlecock 10 combined times they would receive their next clue. The second option was to get cupping therapy. Joey & Meghan chose to do the game of jianzi. At the end they came in 9th place, again getting eliminated.

They were eliminated in leg 3 after having trouble trying to find a taxi.

During the race, Joey & Meghan had a few records. This includes, from the whole Amazing Race franchise, the American Version of the Amazing Race and in the season that they competed in.

Joey works with TEEN.com, and appeared on "The Click Clique," and "Eff Yeah! I Want That," on YouTube. Joey had a new show on TEEN.com called, Joey's Dystopia. The show ended when TEEN.com began their new schedule of shows in May 2013.

Joey doesn't only work alongside Meghan on Teen.com, he works with AwesomenessTV with jennxpenn & Lia Marie Johnson on another YouTube channel, where they do many things, from sketches to cheerleading programs. As of July 1st, the channel had its own slot on Nikelodeon, and aired at 8 P.M. (ET/PT), hosted by Daniella Monet from the program, Victorious.

Escape the Night was an American postmodern meta-fictional murder-mystery reality web series hosted by Joey Graceffa that premiered on June 22, 2016 on YouTube Premium.[4] It is unknown if a season 5 will be released.

Joey has also created and starred in his own webseries called Storytellers, which aired on Joey's YouTube channel from December 22, 2013 – January 19, 2014; Joey is trying to get Storytellers another season. 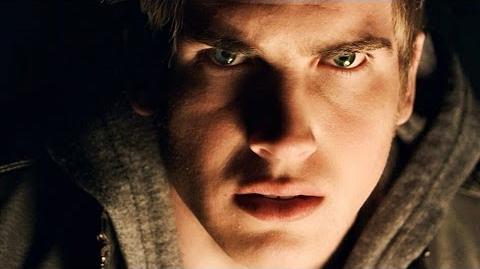 STORYTELLERS is Skins meets Are You Afraid of the Dark? – the summer before they leave for college, a group of unlikely friends gathers around a campfire to tell scary stories, and what begins as joking fun grows steadily more frightening. As the lines between fantasy and reality begin to blur, our group of storytellers ultimately discover more than they bargained for about their world...and each other. Part coming-of-age story and part episodic horror series with plenty of light touches of comedy, STORYTELLERS plays with familiar tropes and archetypes in fresh, unexpected ways. Following a Skins-esque format, the series will have seven episodes, with each of the first six centering around a specific member of the group, leading up to a final episode bringing all of them—and their stories—together.

As July 10, 2013 the Kickstarter reached its goal and surpassed it by 40,000. Overall, the total is a little over $140,000. However, Joey announced in a vlog on July 11, 2013 that there were difficulties receiving all of the money from the Kickstarter. He then started an Indie Go Go page to get the remaining money needed, in which he did. Filming lasted between late September to mid October & the series was released from December 22, 2013 – January 18, 2014. Joey has plans to do a season 2, but as of now, there is no information on if/when filming will take place.

Joey plays a wide variety of games including simulators, story-based games, and others. He occasionally collaborates with other YouTubers, such as LDShadowLady, StacyPlays, Strawburry17, IJustine, and SeaPeeKay.

The following is a list of games (not including Minecraft series which are in their own section) he played starting from August 2017:

Joey has played Minecraft many times starting from when he played "Hunger Craft" or MCSG (Minecraft Survival Games) online with other players, and has since played multiple Minecraft series in vanilla or modded versions (such as Pixelmon and Attack of The B-Team), and often with other Youtubers. He and Stacyplays often played Minecraft series together, including Hunger Games, a Harcore series, the Hexxit modpack, a series of minigames called Levels PvP (exclusive to SkyDoesMinecraft's server). Joey and Stacy also had a series on a map by Bodil40 called Epic Trolling Jump Map where they go through difficult obstacles, trying to achieve all 69 checkpoints. Along with LDShadowLady and Stacy, they had a series called Quest For Pumpkins, similar to Epic Trolling Jump Map. Each of these collaborative series have since ended.

Joey also started a "Crafting Dead" series after having a long history with the mod as it emulates the scenarios from the television show, The Walking Dead, of which Joey is a fan. He and Stacy started playing with a new companion, Strawburry17, though later restarted the map with iJustine.

Joey was asked to participate in UHC Minecraft hosted by Mineplex. It is an elimination game where you don't regain hearts. He spent some time practicing for Season 4 of this UHC, and finally ended up dying midway through the 6th episode where he died from fall damage. Joey has also uploaded a special UHC Season 4.5 video, this was supposed to be Season 5 however, there were too many problems causing them to restart.

Afterwards, Joey and Stacy started a series where they played on UHC (Ultra Hardcore) servers, including "Flower Power UHC" as the most recent. This series seems to have concluded July 18, 2017.

X Life is a modified SMP — created by Dangthatsalongname — where players start with one heart and the objective of the server is to survive with 10 lives. Losing a life adds one more heart to a player's health, and a player is eliminated from the server if they lose all of their remaining lives. He was one of the members of the "Witch Coven" that formed on the server.

The Empires SMP is a modified Minecraft server, where the objective is for players to establish their own empires to trade goods and resources with other empires, as well as wage wars. He founded "The Lost Empire" which was Aztec-themed in a jungle biome.

The sequel is very similar to the original season, but with new Empires and set in version 1.19. This time he founded his pirate-themed empire in the ocean biome. 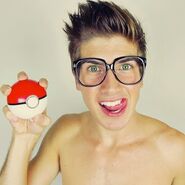 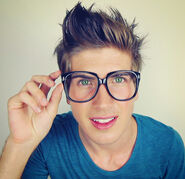 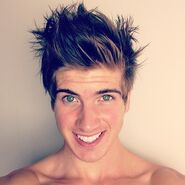 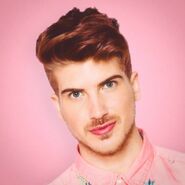 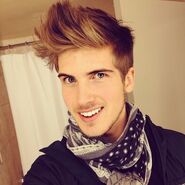 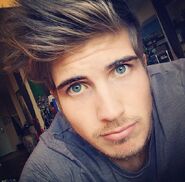 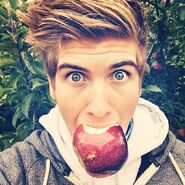