jschlatt (born: September 10, 1999 (1999-09-10) [age 22]), also known as Schlatt, is an American YouTuber and Twitch streamer who makes videos on games such as Minecraft, Cities: Skylines, various Wii games, and others. He is also known for being a member of the now-defunct SMPLive, a streamer-only Minecraft server started by CallMeCarson.

He created his channel on July 6, 2013, and uploaded his first video on June 6, 2014, titled "good boy eats food". This video features his pet at the time, a bearded dragon, eating food. He's currently a member of One True King, a gaming organization.

He was a computer science and cybersecurity major in his college years before dropping out in September 2019[1] to pursue YouTube. He used to work at a delicatessen.[2] As a child, he played the cello.[3]

He formerly lived in Brooklyn, New York City, but moved to Austin, Texas on February 13, 2021.[4][5] He had also planned to move to Los Angeles but decided against it in favor for Texas. In September 2021, Schlatt revealed that he'd been kicked out of the house, as it was later sold to someone else.

On May 23, 2021, during a livestream, gaming organization One True King based in Austin, Texas, announced that Schlatt joined its content creator roster.[6]

Schlatt started his channel back in 2013, his first upload was on June 5, 2014. It was a video titled ‘Good Boy Eats Food’. Soon after he'd start uploading MLG and other meme related content. On May 6, 2018, he uploaded A Tribute to Minecraft. Unlike his other videos, a Tribute to Minecraft focused more on emotion rather than comedic value. On March 19, 2019, Schlatt uploaded his last video onto the Jschlatt Main Channel. He focused on streaming and making videos on JschlattLIVE. He recently has started streaming again and has done the biggest MCYT stan Purge on his stream that includes twitch accounts that has the keywords: "Karl Jacobs, NotFound, WasTaken, Innit, etc.".

Around March 2021, Schlatt posted a video including him and a group of people playing the video game 'Jackbox', with the thumbnail including the text 'BLACKFACE', and a drawing of a human head with black colored on top of it. After Schlatt had gained backlash for the thumbnail, he would later change it to a picture of the Twitter logo with the text 'DUMB BIRD'.[7]

''im rich and im white. why the fuck do you think im on hood twitter LMAO''

Soon after, Schlatt gained backlash from the tweet, being accused of racism.[8]

Schlatt has been accused of saying slurs on multiple instances. These accusations include saying a transphobic slur and the n-word on Discord, saying the f-slur on a live-stream and later claiming that he was gay and thus allowed to say it,[9] and calling one of his video game characters a lesbian slur.[8]

A series of thoughtful retrospectives on Schlatt's favorite pieces of media. There are currently three videos in the series- one on Minecraft, one on Mario Kart, and one on Rollercoaster Tycoon 2. There is an unfinished tribute series on the 1997 Radiohead album "OK Computer", but was abandoned due to copyright strikes and claims from Radiohead's record label group, Beggars.

Schlatt has a series of videos on OpenTTD, a transportation game. However, this series has gone unused for quite some time, possibly due to the rising popularity of his Minecraft videos by comparison.

For a brief period, Schlatt made "video essay" styled content. These videos covered a wide range of topics, from the Garfield Gender War to the vastness of space to mechanical keyboards. However, he hasn't made a video essay in a while, so it can be presumed that these are abandoned, for now at least.

Most of the earlier content on Schlatt's main channel are montage parodies that are usually around 30 seconds in length. These include "Elon r u ok" and a series of MLG-themed videos.

On his third channel, theweeklyslap, Schlatt had a series wherein he answered questions in his inbox. He gave advice and shared his own personal anecdotes that relate to the questions he answered as well.

Schlatt has made multiple "tier list"-style streams, in which he reviews multiple pieces of content and then ranks them on a tier list. So far, these include ranking his fans' Minecraft bases, Minecraft parody songs, Minecraft music discs, cereals, and more.

Many of his videos are from SMPLive, a streamer-only Minecraft server started by CallMeCarson. He often collaborated with others on the server, such as ConnorEatsPants, to scam others out of their hard-earned money, in exchange for his cryptocurrency, Schlattcoin.

Schlatt also plays Minecraft outside of SMPLive. He participated in Minecraft Mondays, a weekly event for both Minecraft and non-Minecraft YouTubers/Twitch Streamers, where teams of 2 compete for $ 10,000. He won the tournament once with Technoblade carrying him. Much of his Minecraft content is in collaboration with other SMPLive YouTubers, such as Wilbur Soot. Jschlatt is also a part of the Dream SMP along with other popular Twitch Streamers and YouTubers.

On the jschlattLIVE channel, Schlatt made videos on an array of Wii games, such as Wii Sports Resort or Cooking Mama.

More recently, Schlatt has played Jackbox with friends. He played the minigames Champ'd Up, Mad Verse City, Patently Stupid, and Talking Points. While playing Champ'd Up, he and his friends made drawings parodying himself. Many of these drawings are contorted and caricaturized versions of Schlatt, with names being comedically changed to Schlagg, Schlutt, Shlatt, and more.

Schlatt is well known for appearing in a variety of videos by different creators. Most notably CallmeCarson, Wilbur Soot, and Tommyinnit (just to name a few). Schlatt was also part of the Lunch Club YouTube Channel, until it went on an indefinite hiatus in 2020. In January 2021, Schlatt revealed that he had cut all ties with Carson due to Carson's ongoing sexual allegations. He stated in a video that he wishes for Carson to seek help. This was seen by many as an act of neutrality and applauded him for being neutral about the whole scandal.

Schlatt also sometimes appears on his friends' streams even though before he himself decided to stop streaming. He has recently started streaming again.

On his channel jschlattLIVE, another running joke by jschlatt involved him posting comedic statements on his Community Tab that were related to his most recent videos. These follow the format "thinking about ____." Some examples include:

Jschlatt has a common joke going around that he has a pope living with him wherever he is at. The joke was first conceived on August 18th, 2020 when Jschlatt made a (now unlisted) video called " Job_application_1 " where he talks about having a summer internship on watching his pope that lives in his house. As stated by Jschlatt the pope would have color indicators in which how it was feeling. It its bright blinding white its time to pray, If the pope turns blue that means its sad, in which he follows that you should likely say a prayer to not anger it. If it goes red, the pope will become very mad.

In many different videos and skits, the pope would be seen to get angry with Jschlatt, one time even trying to attack him.

jschlatt has a running joke of fake names by saying the phrase "You know what they call me? They call me ____." Aside from this, his friends and his fanbase have also given him other nicknames. Some of these include the following:

This list is, however, missing a lot of nicknames, especially from his Minecraft Mob Tierlist stream, and possibly in way more of his videos and video appearances. 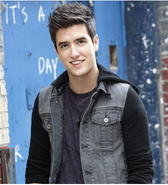 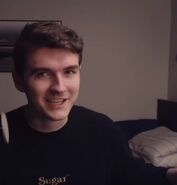 One of Schlatt’s first moments using his facecam in his Wii Sports Video. 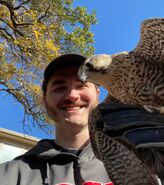 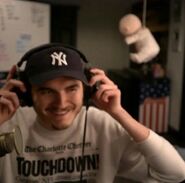 Jschlatt bonding with his son: Yuto
Jjj.jpg
A thumbnail from his video "We made this game TERRIBLE" that got him cancelled.

Schlatt with his new cat, Jambo 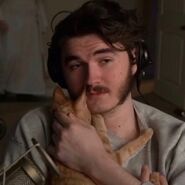 Jambo appears to like cuddling with Schlatt and is seen doing it often. 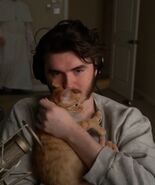 Jambo waiting for Jschlatt to come home. According to ConnorEatsPants, he does this every time Schlatt leaves the house.