Justin Drew Bieber (born: March 1, 1994 (1994-03-01) [age 26]) is a Canadian singer and songwriter. Encountered at 13 years old by talent manager Scooter Braun after he had watched his YouTube cover song videos, Justin was signed to RBMG Records in 2008. With Justin's debut EP My World, released in late 2009, Justin became the first artist to have seven songs from a debut record chart on the Billboard Hot 100.

Justin released his debut studio album My World 2.0 in 2010. It debuted at number one in several countries and contained the worldwide hit single "Baby", which was certified 12x Platinum by the Recording Industry Association of America (RIAA). Following his debut album and promotional tours, he released his 3D biopic-concert film Justin Justin: Never Say Never. In years after the releases of the Under the Mistletoe (2011) and Believe (2012), Justin had several run-ins with the law internationally before his first arrest in 2014, including when he was accused of reckless driving in his neighborhood in 2012, and charged in Brazil with vandalism in 2013. More than 270,000 people petitioned the White House seeking to have him deported from the United States. Although the number of signatures received was sufficient to require a response under published White House guidelines, the Obama Administration declined substantive comment on the petition.

Following the controversies surrounding Justin, his sound became more mature as he transitioned into EDM and drifted away from teen pop. Released in 2015, his fourth studio album Purpose became his most critical and commercially successful album, spawning three Billboard Hot 100 number one singles: "What Do You Mean?", "Sorry", and "Love Yourself". It was nominated for Album of the Year at the 59th Grammy Awards. Since the release of Purpose, Justin had featured on several successful collaborations, including "Cold Water", "Let Me Love You", "Despacito (Remix)", "I'm the One", "I Don't Care" and "10,000 Hours". "Yummy", his first solo single in five years, was released on January 3, 2020.

Justin has sold 105 million records in the US alone, making him one of the world's best-selling music artists. He has won numerous awards throughout his career, including a Grammy Award, 15 American Music Awards, 20 Billboard Music Awards, two Brit Awards, a Latin Grammy Award, a record 21 MTV Europe Music Awards, and three MTV Video Music Awards. He was included by Forbes list of the top ten most powerful celebrities in the world, in 2011, 2012 and 2013. In 2016, Justin became the first artist to surpass 10 billion total video views on Vevo. He has been honored with a star in front of Avon Theater in Ontario, Canada, and presented with the Queen Elizabeth II Diamond Jubilee Medal.

Justin was born on March 1, 1994, in London, Ontario, at St Joseph's Hospital, and was raised in Stratford, Ontario. He is the only child of Jeremy Jack Justin and Patricia "Pattie" Mallette, who was never married. Mallette was underage when she gave birth, and her mother Diane, and stepfather Bruce helped her raise her son. His ancestry includes French-Canadian, Irish, English, Scottish, and German. He has also stated that he has some undetermined Aboriginal Canadian ancestry.

Through his father Jeremy, Justin has three younger half-siblings. Jeremy and his ex-girlfriend Erin Wagner, who broke up in 2014 after seven years together, have two children, daughter Jazmyn and son Jaxon. Jeremy married his girlfriend Chelsey in February 2018, and they have a daughter named Bay. Justin also has a stepsister named Allie, the daughter of his stepmother. Pattie worked a series of low-paying office jobs, raising Justin as a single mother in low-income housing. Justin has maintained contact with his father.

Justin attended a French-language immersion elementary school in Stratford, the Jeanne Sauvé Catholic School. Growing up, he learned to play the piano, drums, guitar, and trumpet. He graduated from high school in Stratford, Ontario, the St. Michael Catholic Secondary School in 2012 with a 4.0 GPA. In early 2007, aged 12, Justin sang Ne-Yo's "So Sick" for a local singing competition in Stratford and was placed second. Mallette posted a video of the performance on YouTube for their family and friends to see. She continued to upload videos of Justin singing covers of various R&B songs, and Justin's popularity on the site grew. In the same year, Justin busked shows in front of Avon Theatre steps during the tourism season.

Note: The following dates are according to SocialBlade. Dates may vary by ~1 day (2 days if you live outside of North America) due to differences in time zones. 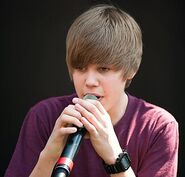 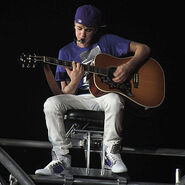 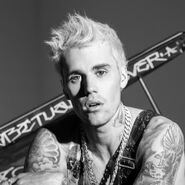 Retrieved from "https://youtube.fandom.com/wiki/Justin_Bieber?oldid=842469"
Community content is available under CC-BY-SA unless otherwise noted.