Wikitubia
Register
Don't have an account?
Sign In
Advertisement
in: Candidates for cleanup, YouTubers, Cooking YouTubers,
and 5 more

Kelsey Lang Kreppel was born on September 24, 1993, in Los Angeles, California. She studied child and adolescent development in college, which eventually led to her becoming a preschool teacher. In September of 2017, she began dating popular YouTuber Cody Ko, which led to her starting her YouTube channel later that same year. Her first video was a typical "new channel" car vlog.

She likes reviewing fashion[1][2] and has a series called "Dinner with Kelsey"[3] where she reviews and cooks food, and so far she has cooked fritters[4], cookies[5], pasta[6] and mushrooms[7]. Her boyfriend Cody appears in some of these videos, and she has even inspired him on his own channel - when he collaborated with Dhar Mann, she gave him the idea to write a skit based on her favorite saying "patience is a virtue". She also used to make beuaty videos like recreating Pinterest hairstyles[8] and rapper tattoos[9]. Though not a professional artist, she has also drawn her subscribers selfies[10]. 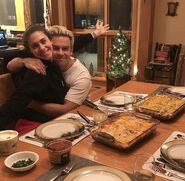 Kelsey and her dog