PJ was born in Peterborough, Cambridgeshire, England to an Italian family. He attended the University for the Creative Arts in Farnham, Surrey, graduating in June, 2013. He currently resides in Brighton, England.

PJ started making videos in late 2007, and has steadily gained subscribers ever since. He amuses viewers with clever sketches and animations, brilliant impressions and general humour. He's well known for his "fantastical, immersive kind of storytelling with short films" like The Forever Train, Colour Bandits, Lullaby Cube and The Party Nightmare.

PJ also makes music and even released an album called "Stories From Somewhere", along with other music he has created. He describes his music as "anti-folk": it gives off a very summery and careless vibe, which makes everyone who listens happy. 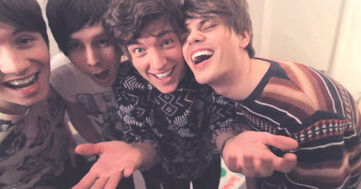 Add a photo to this gallery
Retrieved from "https://youtube.fandom.com/wiki/KickThePj?oldid=688697"
Community content is available under CC-BY-SA unless otherwise noted.