Jordi made his channel Kwebbelkop in 2008 and uploading his first video on May 3, 2011. Around June 2013, Jordi started doing YouTube Full-Time.

In February 2014, Jordi, his friend Jelle van Vucht (Jelly) and Aquib created a YouTube group called Robust. The trio used to upload races together. Later on, Aquib left and few months later, British YouTuber Josh (Slogo) met Jelly and Jordi and Gamescom 2014. Josh then became a member of the group. After Josh joined the trio, the trio became widely popular. In 2019, Kwebbelkop was eventually replaced by Crainer.

Jordi filmed solo videos until he met Hassan in March 2020. He and Hassan started to make gaming videos and then in July 2020, Jordi made an account for his friend Hassan named "Tiger".

In July 2020, Hassan started to upload videos at the Tiger channel which was actually owned by Kwebbelkop. In February 2021, Jordi left recording with Hassan and Hassan made an exposal video about Jordi. In February 2021, Hassan abandoned his Tiger channel and he made a new gaming channel named "Liger". On 20 March 2021, Hassan uploaded a video "Why I Left Kwebbelkop and Tiger" where hey told that he was wanted a break. He said that he didn't want to go in details.

On 1 April 2021, all of a sudden Tiger channel uploaded a video where it was shown Hassan was stuck in a computer and Jordi opened the computer and talked to Hassan. Later on, Jordi uploaded videos with an animation of Hassan and used a voice changer app to make it look like Hassan. Hassan told that it wasn't him recording and uploading at the Tiger channel and he was just angry at Jordi. Hassan started to call Jordi "Kwellapaap". 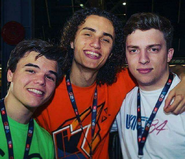 Kwebbelkop with Jelly and Slogo 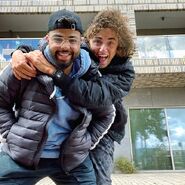 Jordi with Liger
Add a photo to this gallery

Retrieved from "https://youtube.fandom.com/wiki/Kwebbelkop?oldid=1112837"
Community content is available under CC-BY-SA unless otherwise noted.