In 2012, she formed a female gaming group called the Pixel Pact. The Pixel Pact consists of Vengelfe, Yammy Xox, MittyMoxx, NyanStrike, Elleanora and herself as well as affiliate members: LaurenzSide and Kaleidow. She also has a younger sister Microglitch (Maddie, as Lizzie calls her). The Pixel Pact is no longer together.

Lizzie became engaged to her long-term boyfriend Joel (known online as SmallishBeans) in November of 2017. Lizzie and Joel married on May 11, 2019.

TrollCraft was a Minecraft series, in which some of her friends joined and participated in fun collabs and even a mini roleplay. For the most part, it was about pranking the other players, while in the meantime, they had competitions and such, much like Crazy Craft 3.0. The first one to discontinue the server was Lizzie, or so people believe. The series ended on June 14, 2017.

LDshadowlady started at Crazycraft 3.0 and invited several friends. In the series, each player could use creative mode to build their houses and have fun exploring doing quests and pranking their neighbors. Players could also invite others to special events and competitions. It has also been discontinued.

The private server contained several mods and opportunities for the players. On the server, Lizzie's house was built to resemble the Disney castle in Paris, France.

Minecraft Championship is a Minecraft Tournament for YouTubers and Streamers run by the Noxcrew, in which 10 teams of four compete in a series of 8 minigames decided by the participants. A point multiplier makes each game worth more as each round passes, incentivizing teams to vote for games they might be bad at early on in the event.

In the end, the two teams with the most points face off in a round of ‘Dodgebolt’ to decide the winner of the tournament. This makes it possible for a team to win despite potentially having less points than the runner-up. LDShadowLady debuted in MCC1.

Her once main Minecraft series on her channel was a modded single-player survival series called ShadowCraft, in which at least one of her animals always seemed to meet a dire fate in almost every episode. She has had to expand her animal graveyard before, to show respect for her later deceased pets. The series had over 73 episodes.

Lizzie tried her hand at the dinosaur mod in the mod pack she used and created a Jurassic Park themed site within her world. Many of her dinosaurs have either escaped and killed other occupants of the park, died of various means, or simply mysteriously vanished. The most 'regular' animals Lizzie had put inside her treehouse neighboring the park were still alive.

Lizzie announced that ShadowCraft would be put on halt, with season two recorded on May 7, 2015, but ended later because the modpack had corrupted.

Lizzie and her now-husband, Joel, are currently in a competition with each other. They competed against each other in various challenges and the victor wins the privilege of lighting up a Redstone lamp on their deemed 'Totem Pole of Victory'. Before the series had mysteriously ended, Lizzie was winning with 14 victories with Joel having only 4 victories.

does not include all challenges

In a multiplayer series, Lizzie, HuskyMudkipz, and Vikkstar123 came together to tackle the challenge of Captive Minecraft. Within nine episodes, they completed the challenge with Lizzie having gotten 14 achievements, Husky getting 7, and leaving Vikkstar with 9 achievements earned.

iHasCupquake, a friend of Lizzie's, ended the first season of her Oasis series on her channel. When preparing for the second season, she extended an invitation to Lizzie, Mitty, and Annie to join the second season, turning the single-player series into a semi-multiplayer series called Enchanted Oasis. The girls usually recorded on their own in the server and then come together in a few episodes to face new challenges together.

Lizzie's first episode included her roleplay of finding the oasis was actually two weeks later everyone else's. Although late, her way of 'finding' the Enchanted Oasis consisted of her trying to go back in time. After several failed attempts, she gave up and succumbed to the lateness of the episode and joined the others.

iHasCupquake canceled her Enchanted Oasis series, uploading a video officially confirming this and explaining why.

Mini-Games (Discontinued but may continue in the future)

Lizzie has played many Minecraft mini-games with her friends such as Hide and Seek, Block Hunt, Draw My Thing, Build Battle etc.

One Life (Seasons One & Two Ended)

One of Lizzie's new additions to her channel, the series 'One Life' is a challenge series where she and her friends are all trying to survive the Minecraft world with only one life. Their objective is to be the last one to survive, but really, they all just have fun and build lots of creative things! In her last One Life episode titled "The Purge," she decided to fight fellow One Life participant Joey Graceffa to the death, causing her death to occur and the series to come to an end.

The Disney Princess Challenge was where Lizzie creates one of the Disney princesses in the Sims 4 and has to play by the story of that princess. There were certain guidelines for each princess, e.g. Princess Belle must have the bookworm trait and love an ugly sim, and when married can transform into a handsome sim. Lizzie put it on pause but mentioned that it will resume in the future. She then said that the files were accidentally deleted on Joel's stream.

Build Battle is a server game on Hypixel where many people judge you based on the category of the build. For instance, the theme is a cow, you try to build a cow, then the other players rate it, (you also rate other player's builds) Lizzie, along with her multitude of friends played this game often in the year 2014.

In her first Ultra Hardcore (more commonly known as UHC) series, she was on a team with Vikkstar123, and ChildDolphin. ChildDolphin was the first to perish on the team, but due to lag issues, Lizzie died in the same episode a few minutes later. Vikkstar123 died after the carnage, ending their team's chances at victory.

During Lizzie's second attempt at an Ultra Hardcore competition, her partner, Zack Scott, died by Lizzie's hand. A few minutes later, a Creeper exploded next to Lizzie, causing her to also perish.

This series is rather like CrazyCraft and TrollCraft in it's cast and the fact that they can use creatively to build their houses. It is said that during this series they will try to be more legitimate in the gather of materials. The modpack in this series in entirely collected by Lizzie, and she even made some of the mods! Many of her fans dislike her house, calling it "boring" and "cookie-cutter" but Lizzie sticks by her building. She is trying to collect all of the little animal girls and has made a mini town for them.

Lizzie's newest sims series, Supernatural Secrets, is where she creates two sims with Supernatural powers in the Sims 4.The series started on October 1, 2018. In the series the two sims, Eva and Maddie, have to hide their powers from the outside world, including their oblivious roommate, Nora. There are certain guidelines if you would like to try this challenge/series on your own, they are located in the description of every video for Supernatural Secrets.

Kingdom Craft is a Minecraft Factions series started by Lizzie. The series has 9 kingdoms, each a different biome and is owned by one of her friends. Lizzie's husband SmallishBeans, SeaPeeKay, Shubble, Dangthatsalongname, TheOrionSound, LaurenzSide, Yammy, and Joey Graceffa are all in the faction series. Lizzie created The 'League of Villains' and invited Oli and Joel.

X Life is a Minecraft SMP where you start with one heart, and every time you die your hearts go up by one until you have 10 hearts. If you have ten hearts and you die, you will be banned from the server. This series contains some of her good friends like SeaPeeKay and Dangthatsalongname, along with some newer people like PopularMMOs and fWhip.

LDshadowlady was a member of the one heart club, but eventually moved to the two heart club when she died from fall damage while looking for pandas (she missed the water). Then, while making a bubble elevator, she had to go to the Nether to get a magma block and some soul sand. She got stuck in two bungee-cord-like substances causing her to bounce up and down. Joel came to save her with slime blocks, but she still fell to her death. She then lived in the rundown three heart clubtent. However, in Katherine's video, Lizzie then moved into the three heart clubhouse, which is a cactus.

She participated in the Gladiator battles later on, in which she died to an End Troll. However, she got 30 diamond blocks and three nether star blocks. Later on in the series, Lizzie cursed Jack (another player of the server), so that when she died, Jack would also die. However, the same would happen vice versa, and Jack took advantage of that as he was about to be executed. This was when Lizzie realized she made a grave mistake.

When Jack did get executed, Lizzie was also there, and everyone else watched in horror as they saw the life drain away from her. She then had five hearts, which were pink, and Lizzie liked that. But that life was very short, as an hour later, she would die again for the same reason she died last time: Jack jumped into a pool of lava for the December doors, which resulted with Lizzie being of six hearts. When Lizzie did the December Doors, she was much luckier than Jack, and received 30 emerald blocks, which is very ironic.

Empires SMP is a 1.17 server where players establish their own empire to go to war with other empires, or trade with one another for goods and resources. Some of these include Pixandria, Mezalea, Rivendell, The Lost Empire, The Cod Empire, House Blossom, The Grimlands, Crystal Cliffs, Pearl's Smallholding, The Ocean Queen's domain. This series contains most of Lizzie's friends that appeared on X Life, as well as introducing newer people such as Pixlriffs, TheMythicalSausage, and PearlescentMoon. There is a demon, Xornoth, who goes around corrupting the server by building red tentacles coming out of the ground, bu

Lizzie lived in England with her sister (Maddie) and father before moving into her new home with her now-husband SmallishBeans, aka Joel. Lizzie studied Computer Animation and Visualisation at Liverpool University. As stated before, she also is now married to fellow British gaming YouTuber, Joel, who proposed to her in November of 2017. She met him at a gaming convention, Game Fest, and was "wooed" by his dancing skills. She also owns a cat named Buddy and a dog named Meri.

Lizzie has dyed her hair over 10 times most of which being pink, the hair color she is most known for. Currently, it is pink. She doesn't want her full name to be revealed (though it has leaked), but she has revealed that it starts with a "D" as in LD.

She has stated in her Draw My Life that her mother is a nurse, and her father is a doctor.[1] 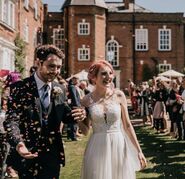 LDShadowlady at her wedding 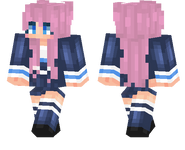 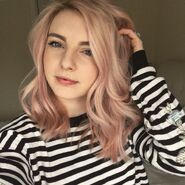 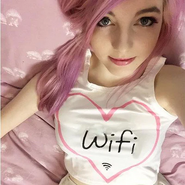 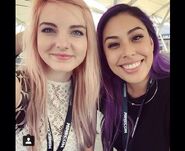 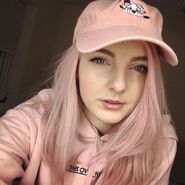 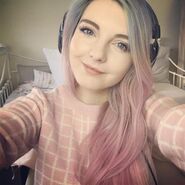 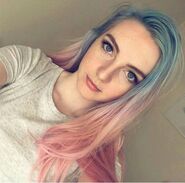 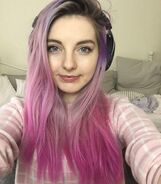 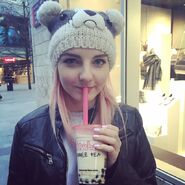 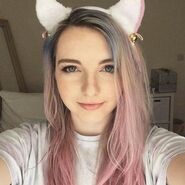 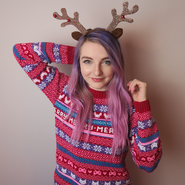 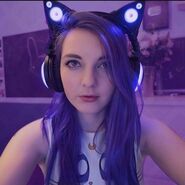 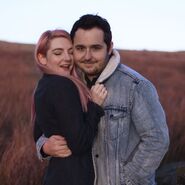 Lizzie as a child