Lachlan Ross Power (born: August 25, 1995 (1995-08-25) [age 26]) is a gaming YouTuber mostly known for his Fortnite videos, although he had previously been successful in Pixelmon, How to Minecraft and Pokémon GO series. His channel was primarily focused around Pokémon Go in 2016 into mid-2017 but has since shifted to Fortnite. Currently, he uploads daily Fortnite videos.

His former Minecraft skin is a blonde-haired male, wearing a red hoodie, but after a while of playing Fortnite, he came back to the game and changed it to an elf, similar to the Codename E.L.F. skin in Fortnite. He now runs his own personal Icon Series skin which he was given in Chapter 2 Season 4 His nicknames include; "JagBattleDuty, Lachy, lachydachy", "The Lachers" and "Little Lachy". He is friends with; Preston, NoochM, BajanCanadian, JeromeASF, LazarBeam, Vikkstar123, Woofless, Muselk, and many others. His first background was made by the New Zealand Minecrafter known as LOGinHDi.

Lachlan has a brother named Mitchell Power, who also plays Minecraft, his Minecraft name is "Fighter_Power" and he is currently an admin on Lachlan's Pixelmon server, "Pokeballers" (now shut down). Lachlan currently lives in Brisbane.

Lachlan is a 23 year old fortnite YouTuber. He originally blew up in 2012-2013 making pixelmon videos and joining a now YouTube famous group called the pack. (Formally) Lachlan has a confirmed younger brother and older sister.(Sister seen in a blog) Lachlan has blonde hair thats style has changed over the years but is usually a slicked back swish type style in his videos.

While Lachlan has never stated his height PrestonPlayz one of Lachlan’s close friends stated a long time ago Lachlan was 6’2. However it’s more likely he’s 6’3-6’4. (Using his pictures with Ali A lazarbeam Elliot and mrfreshAsian) He’s fairly skinny and although noticeably has abs, he weighs a meer 160-170 lbs. (87kg) Lachlan has more of a blueish grey eye color (although appears green at some points) and has two dogs.

Lachlan currently lives in Brisbane Australia. Although he hasn’t had a house tour we know he has been living in the same house since around 2018. We’ve seen five rooms. His bar, living area, guest bedroom, gaming set up/office, and a downstairs bar. Each room seems high class always with led lights along with plants, decorations, and marble with modern finishes. According to Vikstar123 (close friend) Lachlan has had most of his house custom made on the interior. By viewing the house and by comments by Vikstar during his vlog (along with other statements and social media showings) based off of some of the interior cost alone and size of the house it’s an estimate of around 6.5-9 million dollars worth.

More often than not people mistake Lachlan’s salary. Most YouTube’s salaries are heavily underestimated. How do you think youtubers with only a million subs can afford mansions in California? Using the average cpm along with a business youtuber we can calculate that for someone with no other income besides YouTube with an average cpm (3-4/5) and 1.5-2 million subscribers(400k average views per video) will equate 1.9 million dollars a year (with the steady average). Now take Lachlan, positing the same amount as our business man but averaging 3x the views we can calculate he would be making 6 million off of YouTube alone.

Equating donations along with merch and brand deals that sky rockets to around 6.5 million. Taxes for youtubers are usually 40% however leaving Lachlan around 3.5 million he’ll be making this year. During his prime however (2018) he had a cpm of 9 along with at its highest (consistently averaging 350-400 million views per month). We can use a similar method using his cpm. 1000 YouTube views would equate Lachlan 5-6 dollars at the least. Meaning Lachlan would be making upwards of 21 million at the least. However that would boil down to roughly 11-12 million after taxes. He’s estimated net worth has gone from 900k(during the pack) and the least wealthy of the pack to the most at around 19-25 million dollars.

In June 2013, a bit into Lachlan's Youtubing Career, he started the Pokeballers Pixelmon Server. The Server started off as a single region and has since expanded into several smaller servers offering players the opportunity to play any style of pixelmon they wanted. They have also successfully replicated the original Pokémon FireRed and LeafGreen games into their own Custom Kanto Map with NPC Trainers and the original games loot chests.

The server spanned over 7 Servers including 2 Custom Pokeballer Regions with Player Gym Leaders, A Survival Map, Pixelmon Islands, The Kanto Map and their own Build Server that opens up to the public from time to time, to allow players to have a go at building and showcasing their creativity until Nintendo pulled the Pixelmon mod.

About 3/4ths of the way through 2014, Lachlan joined a server called How To Minecraft with many other YouTubers, such as TBNRfrags, Vikkstar123, Logdotzip, Ali-A, the Little Lizards, PeteZahHutt, JeromeASF and BajanCanadian, there is also Woofless, ChocoTheChocobo, xRpMx13, and Kenny (KenworthGaming) and Pewdiepie. Lachlan has had at least 200-300 more subscribers since this series and about 1000 more views on each video.

He experienced a great deal of success in How to Minecraft 2, more affectionately known as How 2 Minecraft and was in How To Minecraft 3, a more challenging play on Season 2 and featured split map with a "Red vs. Blue" theme jokingly called How 3 Minecraft for a significantly shorter time. The start of How To Minecraft 4 introduced new YouTubers such as LaakeB, TheInfamousQuiff and members of the Nice Posture Gang.

Around September, 2014 Lachlan teamed up with several other users to launch the Pixeltown Pixelmon Server. Some YouTubers he teamed up with for this project include TinyTurtle, Little Lizard, OMGItsAliA and Vikkstar123 who are currently seperated between the 2 servers; Red and Blue for the duration of their series on the server. The Server itself is a Minecraft rendition of the 1st Series of the Pokémon Anime including some quests that are based on the anime itself and some that are completely original.

Lachlan recorded a factions series on his server, Treasure Wars. The first season took place on the Forgotten Woods and the server seems to run on an engine similar to the server run by Rob (MrWoofless) and Preston (TBNRFrags), CosmicPvP as they share staff and similar features.

Lachlan has also recorded multiple Crazy Craft series such as Crazy Craft 3 and Crazier Craft, although the latter was stopped due to bugs on the server.

TBNRFrags and Lachlan recorded a series on the Mad Pack mod pack with MrWoofless.

Lachlan plays Fortnite with LazarBeam, Muselk, TBNRfrags, Dakotaz, and many more content creators including Fresh It was on this game that he gained so many subscribers. His first Fortnite game was with him and Muselk. He now mainly does challenges, fashion shows, and hide and seek in Fortnite.

On July 6, 2016, Lachlan started filming his Pokémon Go vlogs/update videos. A running gag was his inability to get Lapras, despite catching several other rare Pokémon and encountering 2 wild Dragonites. He uploaded near daily content, but posted his last video about the most Mewtwos seen in a Legendary Raid on August 21, 2017 and has not returned despite new updates, believing the game had gotten stale and questioning Niantic's update schedule and dedication to the game (especially after Pokémon Go Fest). 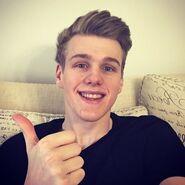 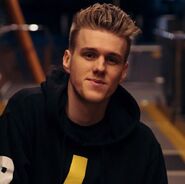