Lawrence R. Lawton (born: October 3, 1961 (1961-10-03) [age 58]) is an American author, motivational speaker, and television personality. He founded and serves as the president of the Reality Check Program, Robbery Prevention, Inc., and non-profit organization the Reality Check Foundation. Born in New York, he was a career criminal who after getting caught, reformed his ways to help younger people stay out of prison and connect the police with the community.

Born in North Hempstead, New York, on October 3, 1961, Lawton is the son of David A. Lawton, a sheet metal worker, and Irene Geoffrion, a registered nurse. He is the fourth of five children: two older sisters, an older brother, and one younger sister. Lawton was raised in the Bronx, New York. Lawton attended St. Francis de Chantal Catholic School for grades one through six. At age 12, Lawton was drawn to organized crime. He sold football tickets in his middle-class neighborhood of Locust Point and was introduced to gambling. He attended intermediate PS 192, followed by Lehman High School.

Seeing no future in the Bronx, Lawton joined the Coast Guard in August 1979 at the age of 17. After seven years in the Coast Guard, Lawton was medically retired due to a back injury. He moved to Brooklyn, New York. It was in Brooklyn where Lawton was drawn back into organized crime as a bookmaker and collector while working in bars in Queens and Brooklyn. Lawton's acumen and aggressiveness eventually caught the attention of higher-ups in organized crime. This led to his occupation as a jewelry thief, who robbed stores all along the east coast. He also used part of his earnings to purchase an Italian pizza restaurant in North Lauderdale, Florida, which he later burned down in an insurance fraud scam.

Lawton went to prison alone on a Hobbs Act racketeering case. He was arrested on December 2, 1996, in connection with organized crime and jewelry store robberies and sentenced to 144 months in federal prison. In 1997 he was sent to USP Atlanta, Georgia, and for the remaining 11 years to the following institutions: FCI Coleman, Florida, FCI Jessup, Georgia, FCI Edgefield, South Carolina, FCI Yazoo, Mississippi, FCI Forrest City, Arkansas.

In 2003, Lawton spoke out against the abuse suffered by prisoners in the Federal prison system, claiming that a large portion of inmates suffered extraordinary abuse at the hands of prison guards, in some cases leading to inmate deaths—including ignoring an inmate with serious cancer until he died of hemorrhaging in his cell, and ignoring a man with pain in the chest and arm who died in front of Lawton. When Lawton sent letters to U.S. senators outlining this abuse and the lack of proper medical care at the facilities in which he was housed, he was placed in solitary confinement for eleven months. In all, he spent nearly three years in solitary confinement. Lawton served his time and on August 24, 2007, was released and started three years' supervised release. While in prison, Lawton earned a paralegal degree and became a gang mediator. Following his release, he became an advocate for many ex-offenders' issues, including prison conditions as well as post-release debt loads and their influence on unemployed ex-convicts.

Since his release from Federal prison in 2007, Lawton has worked with teens and young adults in an effort to educate them about the realities of crime and prison. The main vehicle through which Lawton has done this is the Reality Check Program, which uses lectures, DVDs, and other educational materials to reach at-risk youth before they end up in prison. Lawton's Reality Check Program consists of four parts: Lawton's early life, what prison is really like, what you will lose, and avoiding and dissolving bad associations. The program is available for groups, organizations, schools, and corporations as well as private individual one on one sessions. Additionally, consulting and guidance are available from Lawton and the Reality Check Program. Lawton's programs have been used by judges, police chiefs, sheriffs, public defenders, state attorneys, the federal government weed and seed program, and families. Other activities provided by the program include an annual golf outing to allow at-risk youth the opportunity to interact with officials. The event also shows the officials, kids, when they are not in trouble. In 2010, Lawton filmed the pilot for a new reality show based on his work with at-risk youth which he called Lawton's Law. The Reality Check Program also began offering its quarterly "Community Champion" award, with the first recipient being Florida fire-fighter and avid volunteer Aldo Nunez.

In 2008, Lawton founded Jewelry Robbery Prevention, a consultancy firm that works with insurance companies, private individuals, jewelry stores, police, and the media on how to better prevent jewel robberies, as well as explaining the mindset of jewel thieves to potential targets. In an interview about what stores can do to protect themselves, he has said important things to consider are the ease at which pedestrians can see into the store from the window, using video cameras that download all footage to an off-site server, and using care when dealing with customers that want to see progressively bigger stones while browsing.

Larry Lawton has appeared on TV, radio, talked to audiences throughout the United States as part of the Reality Check Program, jewelry store robberies, crime issues, and prison issues. He hosted his own radio show on AM1300 locally in Melbourne, Florida, and on the Internet. The show ended in 2012 due to Lawton's other commitments. His national TV appearances and radio broadcasts include The Daily Show with Jon Stewart on two separate occasions playing himself as a character in comedy sketches, on August 12, 2009, and April 15, 2010. He has also appeared on The 700 Club on the Christian Broadcasting Network and on the FOX News Huckabee show, where Larry discussed his criminal background and how he came to help at-risk youth. He also appeared many times on Bulldog's Rude Awakening Show in Ocean City, Maryland, and The Mancow Show, as well as others. For example, Lawton was the Casey Anthony expert for FOX Orlando coverage of Casey's release from confinement, as well as for other current events cases involving prisoners. Since 2013 Lawton's media appearances have focused more on jewelry thefts in the news, including interviews with CNN, Fox Business, and ABC World News. Lawton also hosts a local cable television show entitled Lawton's Law in the Orlando area Bright House Networks.

In 2012 Lawton co-authored a memoir entitled Gangster Redemption with New York Times best-selling author Peter Golenbock. The book covered his life of crime, imprisonment, and the founding of his charitable organizations following his release.

On November 7, 2019, Lawton created his YouTube channel. He posts news clips related to him and his Reality Check Program, as well as a series of him reading his book. As of May 9, 2020, his channel has over 29 million views and around 500,000 subscribers.

On August 16, 2013, Lawton became the first ex-con in American history to be named an honorary police officer. The Lake St. Louis, Missouri Police Department swore in Lawton for his law enforcement initiatives since leaving prison. Police Chief Mike Force stated in an interview before the ceremony of Lawton's work with youth, "I think it's really important that we try to intervene in young people's lives early before they go too far down that wrong path. I've looked at the program, flew down to Florida and vetted the program, and went through it myself. I'm convinced that if we can make a difference in people's lives early enough, we can keep them from going down that same path."

In the official release from the police department preceding the award, Force further stated: "I’ve spent over 30 years in law enforcement and have seen a great number of cases where our police agencies, courts and prisons are plagued with an ever-increasing recidivism rate ... The Reality Check Program fills a void that exists with regards to helping deter young people from entering the system for the first time and gives hope to those who were in a dark place in their life. Larry Lawton is a man who has turned his life of crime toward a path of doing what's right and helping others stay out of trouble."

Force also told CBS 4 St. Louis that, "There are four segments to his plan ... I think the most effective one has to do with what you lose when you go to prison. He talks about losing your freedom and losing your reputation and your self-respect but I think the one that hits home most with people is losing your family." On November 21, 2013, Congressman Bill Posey recognized the Reality Check program and Lawton's honorary police officer status in an open session of the US Congress, making Lawton the first ex-con to be recognized on the floor of the US Congress.

All of the times that Larry Lawton has appeared on TV to be interviewed about his past and his current situation.

YouTube Q&A Livestreams where people can ask him pretty much anything.

A series where Larry reviews popular criminal heists in video games, such as Grand Theft Auto.

The most popular series on his channel, where Larry reads and summarizes the chapters in the book he released, called Gangster Redemption. 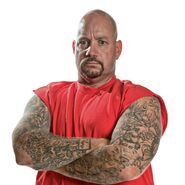 This page was created by JakCooperThePlumber on February 10, 2020.]

Retrieved from "https://youtube.fandom.com/wiki/Larry_Lawton?oldid=834429"
Community content is available under CC-BY-SA unless otherwise noted.