Wikitubia
Register
Don't have an account?
Sign In
Advertisement
in: Hall of Fame, YouTubers, Gaming YouTubers,
and 15 more

He is most famous for creating Fortnite 'memes,' and somewhat less known for his Reddit reaction videos and demonetization. He also often makes Minecraft content in addition to his current uploads. He is now reacting to things due to his boredom and has done 2 Competitions which are The Best Meme and The Best TikTok. He has a long history with being 'Demonetized' and YouTube taking his 'Ad Revenue' as YouTube has been sorely making Sweats Beat Memes as the Lazar Community (Memes) vs The YouTube Community (the sweats).

Lannan was also a member of the Australian YouTuber group Click, along with fellow YouTubers Prestige Clips, Mully, Muselk, Loserfruit, Tannar, Mrfreshasian, Bazza Gazza, and Crayator. The Click Channel posted real-life content instead of game-play related content. They recently moved into a Click Office to separate the House and recordings, lots of other people also record there (Mully, Fresh, Tannar etc.).

Lannan also has a second channel called "LazarLazar" where he posts, quote "stuff too scuffed to be on my main channel." He is also known to have had an intense hatred of Twitch Streamers when killed by one. He is known to scream, “GOD DAMMIT!" YEET!, and "STREAMER BTW!".

Lannan was born in Australia. He and his family originally lived in the countryside of Australia, the prevalence of rodents there help to develop a fear of rodents later in his life. He went to school at MacKillop Catholic College and is known by his school students by the only sucsessful person of his school. He currently lives in Sydney with his sister. Lannan dropped out of high school at age 15 and began work as a construction worker. Lannan has recently moved out of his parents' house and into a house of his own. His sister Tannar has her own channel on which she posts vlogs, mukbangs, gaming footage, and other content. 'Willeh' is the name of Lannan's dog which he has fathered since November 2017. Lannan is also known to feature members of his family on his channel, specifically his father and nephew, Bodhi. Lannan is currently in a relationship with Ilsa Watkins, Muselk's sister. His favourite word is YEET! He currently lives in Sydney, New South Wales, Australia.[2]

Lannan participated in the $200,000 Battle Royale run by MrBeast, being put on the Blue team along with Lachlan and Muselk who all lost after being eliminated by the Light Blue team (Faze Replays, Sancho West And Nickeh30). 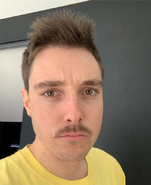