Calvin Lee Vail (born August 18, 1995 (1995-08-18) [age 24]), better known online as LeafyIsHere (or simply just Leafy), was an American YouTube commentator and comedian residing in Seattle, Washington, who made commentary and reaction videos and drama videos. Though his content was heavily criticized and soon led to his rise to fame on YouTube, he was known to popularize the gameplay/commentary format, which soon led to the popularity of similar commentary YouTubers and is still used by many channels today.

He had stopped uploading on YouTube on December 12, 2017, due to the changes of YouTube that brought down this channel and will be gone for the time being.

Although the main focuses of Calvin's videos are his commentaries, he often displays gameplay footage in the background of his videos including various different video games, though most commonly the "surf" game mode in Counter-Strike: Global Offensive (CS:GO), as well as games such as A Story About My Uncle, [Doom, and Overwatch.

Calvin started off his YouTube channel originally posting Minecraft gameplay videos at the age of 16. He owned a ParaPVP Minecraft server to game upon, however, he made a kid angry, who ended up calling him a "butt muncher" and DDOSed his Minecraft server. Calvin, therefore, moved onto CS:GO gameplay, which helped his channel grow.

In January 2016, Calvin video uploaded a video called "THE SADDEST MAN ON YouTube ", where he talked about the YouTuber known as MrBlackDarkness666, a depressed goth who always got harassed by different people, even little children, where he would tell them to kill themselves.

He saw Calvin's video as harassment, so he released a video called LEAFYISHERE GO F**K YOURSELF. In the video, he talked about how his girlfriend broke up with him because she thought that Calvin's video had a point. At the end of the video, he showed a photo of Calvin in real life, setting it on fire with a cigarette and ripping it apart, showing that he could make Calvin leave him alone.

Eventually, Calvin responded with a video THE SADDEST MAN ON THE INTERNET. In the video, Calvin said that the video on MrBlackDarkness666 wasn't intended for harassment and he apologized, but he also said that it wasn't his fault that his ex broke up with him. In the end, the two appeared on DramaAlert, where they apologized to each other.

On March 19, 2016, Calvin uploaded a video titled “THE MOST HEROIC FEDORA MAN ON YouTube,” in which talked about an autistic YouTuber, TommyNC2010. Later that day, TommyNC2010 uploaded a video titled “I am getting Death Threats LeafyIsHere , why?,“ in which TommyNC2010, upset, recorded himself crying and explaining how he was getting a lot of hate and death threats from Calvin’s fans, which caused h3h3Productions to make a video about the situation (which is now unlisted).

After Calvin was receiving backlash from h3h3's rant video, he soon took down the video and uploaded an apology video appropriately titled “Apology. However, after h3h3Productions’s former rant about Calvin received over a million views, Calvin made a response video (which is now unlisted) stating that Ethan Klein from h3h3Productions tried to side with Calvin, where he shows several text messages from h3h3Productions talking negativity about the YouTuber Pyrocynical. Pyrocynical eventually made two videos addressing the situation, the latter of which titled “Let's Call it Quits #uniteyoutube.

The first of which Pyrocynical removed. Keemstar attempted to invite both parties to DramaAlert later on to discuss the matter, but failed. Later, Ethan from h3h3 apologized for his critique of Calvin, stating that the video was "too personal" and "making it seem that Leafy was his enemy". After this, Calvin started to include a disclaimer on his videos for fans to not "witch hunt" the people/content he reviews.

On June 13, 2016, Calvin uploaded a video titled "THE KEEMSTAR AND DRAMAALERT RANT", where he talked about how Keemstar was doing "some criminal shit", which included threatening to release people's information if they criticized him. Calvin also talked about how he falsely accuses people of being a pedophile, with one such accusation making an old man cry while he was streaming on Twitch. Another point in the video was, according to Calvin, that Keemstar was being a hypocrite.

When someone informed Keemstar that Calvin was going to make a video about the false pedophile allegations, he told Calvin that if he was to make a tweet or video about him, he would release his DM'S (Direct Messages) with him. Calvin also brought up that Keemstar was invading other people's privacy and revealing their faces. On July 4th, 2016, Calvin’s YouTube channel was hacked by Twitter user PoodleCorp, who changed the video titles of all of Calvin’s videos to “hacked by twitter.com/poodlecorp".

Months after the scandal, Calvin was accused of sub botting three times. The first incident was when his and Colossal is Crazy's sub count spiked on Social Blade. However, it turned out to be a glitch. The second time was when a small YouTuber known as Ecy claimed to have evidence of Calvin being registered on a sub botting website and using it, in which Keemstar reported. After Calvin proved the information to be incorrect, Keemstar told his audience the information was wrong. However, on the third incidence, the hacker group OurMine hacked into his old Gmail and found out that Calvin made a shorter link to a sub botting website back in 2013, which he denied. Keemstar then reported on the issue. He claimed he wasn't accusing Calvin of sub botting, but did say in the video that he was on a Skype call with Calvin asking for advice after iDubbbzTV's Content Cop on Keem caused his subs to decline. He claims that Calvin's response was "Well you can bot the likes...", Calvin then made a statement about the situation, denying the accusations of him sub botting and claiming that the call between him and Keem never happened.

After Calvin's ex animator HeyWatchYourMouth spoke out against him, saying that he wasn't paying him good enough and claiming that Calvin and Grade really did backstab Keem, Calvin started getting hate and losing subs. In October of 2016, Calvin and Keemstar made their first confrontation in months in a Baited Podcast episode, with Colossal is Crazy and Tommy C STFP in the same call. Keem accuses Calvin of backstabbing him, lying about him and trying to ruin his career while Calvin denies most of the claims. Five arguments were brought up in the Baited episode, Keemstar won five, Calvin only succeeded in one and one was tied. After that Baited episode aired, Calvin gained more hate.

However, in an interview with Keemstar on October 25, 2018, Keemstar asked about the controversy of him and GradeAUnderA attacking Keemstar. Calvin said he did it for revenue.

On September 13, 2016, iDubbbzTV created a "Content Cop" video, as part of his on-going series on YouTube creators, on Calvin, criticizing his videos' content for (in iDubbbz's opinion) having a bad format and overall low quality with repetitive jokes. He also played several existing jokes on Calvin, such as referring to Calvin as a cyberbully and mocking the size of Calvin's chin, with these jokes either being combined or used interchangeably, and in satirical nature, to mock Calvin's claim that his videos are "satire", while using the type of jokes Calvin would make in his commentary videos (such as mocking a part of his appearance which the individual can not control), which iDubbbz in play also depicted satire by its true form and definition.

After iDubbbz's video, Calvin's subscriber-count began to fall drastically and eventually, according to SocialBlade, caused Calvin to lose 2,000 subscribers per day. Many, however, believe iDubbbz wasn't directly involved in this despite his popular video and Calvin's audience was slowly noticing subconsciously how repetitive Calvin's content was and was gradually starting to lose interest before he jumped in. iDubbbz was simply the last little push the audience collectively needed.

On October 9, 2016, Calvin apologized to HeyWatchYourMouth for not giving enough credit or a shoutout, and lost thousands of subscribers daily, as well as having his viewership decline rapidly after the drama.

Calvin has not uploaded since December 12, 2017. His last video was, "this video will make you cry..."[1] and he has mentioned in the video that he hasn't been consistent in uploading because he never was motivated to upload. A YouTuber, known as NFKRZ, made a video about Calvin not uploading. NFKRZ did say that Calvin might've given up on YouTube and set for life because Calvin has '3 million dollars'. NFKRZ also said Calvin is no longer uploading because he isn't active on Twitter anymore, but Calvin did mention that his Twitter got hacked[2] and was unable to get back in it again because it was locked. It was also mentioned by WildSpartanz that Calvin isn't passionate about YouTube anymore and decided to quit.

On June 20, 2018, a YouTuber by the name EmpLemon uploaded a video by the name "Leafy Was Here". In the video, Lemon goes on to explain Calvin's YouTube career, from the beginning to the downfall. The video got a lot of attention, getting over two million views. After Lemons video, people started using the term LeafyWasHere instead of LeafyIsHere because of Calvin's inactivity.

On October 18, 2018, Keemstar of DramaAlert posted on Twitter stating that he was going to interview Calvin.[3] and then uploaded a teaser for the interview on the 24th.[4]

Then, on October 25, 2018, Calvin made his comeback in an interview with Keemstar on October 25th.[5] When asked about what he's been up to, he says that he has been doing investments, which could mean that he's had some form of activity in the stock market like online trading for example.

At 13:45 in the interview, Keemstar brought up the beef that happened between them and asked Calvin why he and GradeAUnderA backstabbed him. Calvin replies: "...AdSense was at an all-time high, but... and I can only speak for myself, obviously," basically admitting that he lied and did it for views and money.

In October 2019, Leafy changed his subbox from having other YouTubers to one account called Crisp with the caption "LITTLE SISTER" above it. He's actually Leafy's younger brother. Afterwards, YouTubers started theorising that Leafy might come back with his brother.

Calvin’s fanbase, who often called themselves "Reptilians" or "The Reptilian Brotherhood", was known to often spam videos and channels with comments such as "hiss" and "nice shirt" — mostly on videos that Calvin talked about. Around the time when Calvin's channel was first gaining rapid popularity , many of Calvin's fans spread the phrases "Hissss" and "Leaf a Like" on multiple websites attracting the attention of large amounts of internet users. Multiple YouTubers, and even the infamous hacker group "Lizard Squad" (known for hacking PlayStation Network and Xbox Live on multiple occasions), once tweeted "hiss" to Calvin multiple times, which caused “hiss” to become an inside joke on Calvin’s channel. 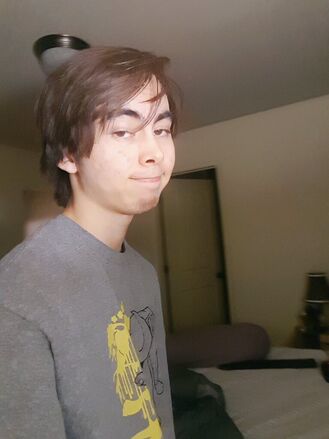 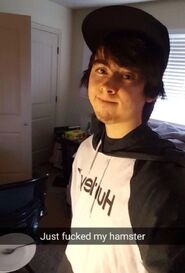 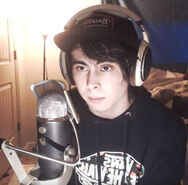 LeafyIsHere and Billy the Fridge 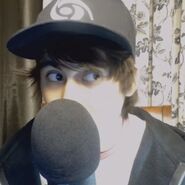 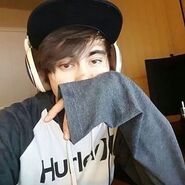 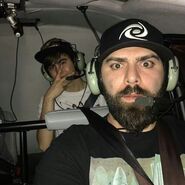 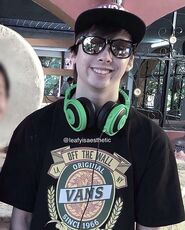 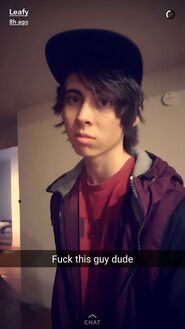 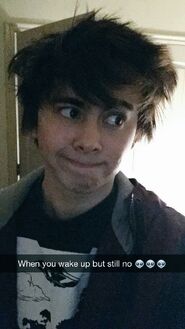 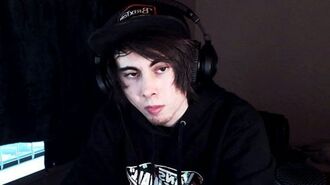 This page was created on January 21, 2016 by Chemistawee.

Retrieved from "https://youtube.fandom.com/wiki/LeafyIsHere?oldid=626498"
Community content is available under CC-BY-SA unless otherwise noted.