Rebecca Parham (born: December 4, 1987 (1987-12-04) [age 32]), better known online as Let Me Explain Studios, is an American YouTuber, animator, comedian, singer-songwriter, actress, and voice actress who posts a variety of comedic animated videos on her channel. She is also the founder, CEO, and creative director of the animation studio of the same name. She is currently residing in San Antonio, Texas.

On December 4, 1987, at about 2:14 PM, Rebecca Parham was born to Mike Parham and Ann "Mama" Parham, who have 3 kids, since David, Rebecca's little brother, was born a few years later and Rachel was born around a year or two before Rebecca.

In her childhood, she was creative and loved doing some plays. She loved cartoons, and at one time, Nickelodeon represented the behind the scenes in one of their cartoons, giving her the initial idea to become an animator.

She went into a private preparatory school, which consisted of 200 students in total. The kids in her class didn't really like her, demotivating Rebecca and making her more introverted.

She decided to change from a private middle school to a public high school in 2002 to expect less bullying problems. She entered the aforementioned high school with a total number of two thousand students, who had a different behavior and hobbies from Rebecca.

Her public school's curriculum required art credits and Rebecca chose theater and choir. As much as she felt like she discovered her passion, she did socially have a hard time in her high school theater club because that is where she met her theater teacher. Moreover, didn't get along with the theater kids either. At one point, she decided to drop out from Medusa's classes because she wasn't casted in the comedic play Noises Off (according to her My Crazy Theatre Teacher video).

After dropping out of her classes, she felt relieved and happier. She also had more time to herself and spent a lot of it on the Internet, mainly for fanart. She created her YouTube channel in April 2006 under the name "grizabella626".

She got accepted into her local private university. Initially, she chose to major in theater and choir. However, a year later, she discussed changing majors with her parents from theater to animation. Rebecca showed her drawing skills to her parents, making her father convinced to send him to Ringling College of Art and Design.

She visited the campus, and initially, her portfolio got rejected by the Ringling advisor, so she decided to recreate her entire portfolio, then send it to Ringling. A few months later, she got accepted into the university.

She rediscovered YouTube and the creators on the platform, including Dane Boe, who eventually became friends with her. She kept to an idea herself of becoming a YouTube animator or a YouTuber herself, despite the fact that people choosing the computer animation major are supposed to be applying to big studios like Pixar and DreamWorks. When she finished her thesis film, Bottled Opera, she graduated from Ringling College of Art and Design with the BFA in computer animation and a minor in business of Art and Design in 2013.

After graduating, she planned to return home to Texas, rework her portfolio and apply to major animation studios. Though, she was encouraged by her family to make a business herself, under the name "Let Me Explain Studios". Her new YouTube channel was created on February 17, 2014, and uploaded her first video on that channel (entitled "BeeFwee!") on June 21, 2014.

Moreover, in the same year, her father died on November 18, 2014, due to a heart attack. Losing him taught her was that when somebody lives through something that they previously thought they couldn't survive and they make it out okay, the world to their perspective doesn't seem to be terrifying anymore, and they could always be a lot stronger than they think.

Despite her dark times, she continued to run her company by continuously freelancing YouTube videos. She received twenty thousand subscribers 2 and a half years later and became friends with other YouTube creators, including TimTom, Jaiden Animations and more. Moreover, she worked on "How to Creep Out Your Favorite YouTubers at Conventions", which was published on May 5, 2017, and ever since the video was published, her subscriber count increased drastically, making her reaching 100 thousand subscribers, the night before flying to VidCon. In July 2017, she officially became a full-time YouTuber, and since then, she continued uploading videos for her fans and continued gaining subscribers.

She mainly uploads animated videos. In these videos, she explains about special moments and stories of what happened in her life. However, they are sometimes just animations without her explaining one of her stories. She has some animations that can be found exclusively either in her second channel or in her portfolio website. However, she does have some deleted animations, where some of them were either copyrighted by WMG or she just deleted them.

Most of the time, especially recently, the main animated character represented in these videos is basically herself, but her skin being completely white without a mouth. She says that animating mouths are time-consuming but she can still convey her feelings without it.

She seems to be the type of person who is actually nice to almost everybody. For example, she loves to see her fans. She also seems to easily get tired from animating, despite her progress in animation. She also loves Disney parks, cartoons, and YouTube. She also gets angry on some people like Eric Paul Engel, her communications teacher. She doesn't usually like social interactions, so she is also pretty introverted.

She has a younger brother named David and an older sister named Rachel.[1]

It is confirmed that her father is deceased. The cause is by a "massive unsurvivable heart attack," and he died on November 18, 2014[2]. Even though she recognizes him on some of her storytime videos, years before he died back in 2014.

Her grandmother died the summer before her sophomore year. To Rebecca, her grandmother felt like she was another parent to her, who lived with her for 12 years. The cause of her death is currently unknown.

She posted on Twitter that she was tested positive for what was believed by the doctor to be COVID-19. She had breathing symptoms that would lead others to the hospital, and although she claimed that she was on the mend, she also tweeted right after that she didn't recover from the symptoms.

Sometime later, in the week she posted the What It Was Like Having The Virus video, she said that she has almost fully recovered from the virus and she gets to sing properly again, as she said in this tweet, days after she was diagnosed.

She first started monetizing her own channel in October 2016. As of June 2020 according to Socialblade, the earnings between her two channels sit somewhere between $30.9K and $511.5K yearly. [3]

None of these videos are age-restricted by YouTube, however. 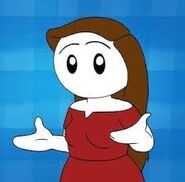 Most of the time, in her videos, the main animated character is represented like this. 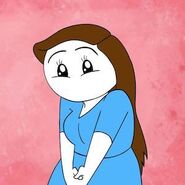 Ditto.
Add a photo to this gallery

Retrieved from "https://youtube.fandom.com/wiki/Let_Me_Explain_Studios?oldid=847348"
Community content is available under CC-BY-SA unless otherwise noted.