LixianTV is a YouTube animator. He is mostly known for his Markiplier animations, some of which are the most popular videos on the latter's channel. He is also responsible for Tiny Box Tim's iconic design. As of May 2018, his channel has over 320,500 subscribers and over 30,260,000 views.

LixianTV was born in Portugal on July 17th 1991. According to his first Q&A video, he first became interested in animation during his early adolescence, inspired by stick figure animations he watched on YouTube. Throughout adolescence, he intermittently pursued this interest before fully committing upon establishing his own YouTube channel [1]. In another Q&A video he revealed that he was mostly self-taught via online tutorials and trial-and-error [2].

Lixian has a second channel dedicated to vlogs. 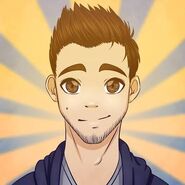 YouTube Icon (Previous)
Add a photo to this gallery
Retrieved from "https://youtube.fandom.com/wiki/LixianTV?oldid=830741"
Community content is available under CC-BY-SA unless otherwise noted.