Besides being an EDM producer and DJ, he uploads cooking videos, how-tos, vlogs, films, etc. on his YouTube channel. Marshmello is also a DJ who goes by the name Dotcom, who is the original incarnation of Chris' career. He is planning to bring back his Dotcom's career, announced on February 2019.[3]

His musical style includes groove-oriented, synth and bass-heavy electronic dance music. Inspired by other masked DJs like Deadmau5 and Daft Punk, Marshmello appears wearing a full-head-covering marshmallow helmet. Despite the anonymity, his career received international recognition in 2015 when he began releasing tracks online, including remixes of Zedd's "Beautiful Now", Jack Ü's "Where Are Ü Now" and others, as well as his single "Alone". Marshmello performed at New York's Pier 94, Pomona, California's HARD Day of the Dead festival, and Miami Music Week. In 2016, Marshmello released a compilation of his previously released tracks, Joytime, which reached number five on the US Billboard Dance/Electronic Albums chart. Included on the album was the single "Keep It Mello" featuring rapper Omar LinX.

Joytime and Debut on Monstercat

On January 8, 2016, Marshmello self-released his debut album Joytime, consisting of 10 tracks, through his label Joytime Collective. The album topped iTunes electronic album chart on the first day. As of 30 July 2016, the album is twelfth on the chart. Two singles were released from the album, titled "Keep It Mello" featuring rapper Omar LinX and "Want U 2". The album peaked to number five on Billboard's electronic/dance albums chart.

Marshmello debuted on Monstercat with his song "Alone", which appeared on the compilation album Monstercat 027 - Cataclysm. On June 3, 2016, it was announced that there would be a remix contest for "Alone". The winner would have their remix released by Monstercat and a chance to play an opening DJ set at Camp Bisco. It was later announced that future house duo MRVLZ had won the contest.

EDC Prank and Debut on OWSLA

On June 19, 2016, Marshmello performed at Electric Daisy Carnival 2016 in Las Vegas where Dutch DJ Tiësto, who wore the same clothes as Marshmello, showed up on stage and took off his helmet assuming to be Marshmello. It was later disregarded as a publicity stunt by fans and the media due to their conflicting tour dates and a photo of "the two helmeted DJs hanging out together pre-show". Later in July, he said on Twitter that he and Skrillex have "something awesome" for the fans which probably means they have a collaboration to be released.

On August 20, 2016, Marshmello announced the Ritual Tour on Twitter, on which he will perform in several countries including the United States, China, South Korea, India and Paraguay from September 30, 2016, until January 21, 2017.

"Oh, Marshmello," Skrillex responded, before picking up the phone and putting DJ-producer Marshmello on speaker 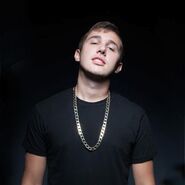 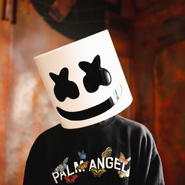 One of Marshmello's former profile pictures.