Jimmy Donaldson (Born: May 7, 1998 (1998-05-07) [age 21]), better known online as MrBeast (formerly MrBeast6000), is an American YouTuber residing in Greenville, North Carolina known for his videos that often consist of him either donating a lot of money, saying or reading long words or repeating them, or doing a specific task for hours or even days on end. With unrelenting passion and devotion to finishing arduous, yet creative, challenges, Jimmy has become an extremely popular YouTuber in recent years.

The channel is mostly run by Jimmy himself, his roommate Chris and several other affiliates, who they make very unique outside videos as experiments, challenges, or just creative. They both also do a lot of donation videos to Twitch Streamers, notably females and well-known Fortnite players. Currently, his main channel is the 17th most subscribed channel in the United States.[1] He started this channel in 2012 at the age of 13. He has a brother who made his own channel called MrBro.

He also has a second channel called BeastHacks (formerly Mr.Beast) where Jimmy and his friends react, commentate, and review on life hacks, and roast them if they are disgusting or bad.

His brother, CJ Donaldson, also has a channel inspired by his brother, called MrBro. He started his channel in 2017 but only started posting in August of 2019. He also makes challenge videos, like his brother.

On October 24, 2018, Jimmy made a video called, I Bought Every Billboard in my City to do this.[2] Jimmy used these Billboards to advertise PewDiePie and to prevent a music company, T-Series from surpassing PewDiePie in subscribers. Additionally, Jimmy created ads online to advertise PewDiePie, if you click on it, it sends you to PewDiePie's channel. Jimmy also advertised PewDiePie on public posts, newspapers, and the Radio. The day it all happened, the people who saw the advertisement did subscribe to PewDiePie and is growing faster than T-Series. T-Series was approximately less than 100,000 subscribers off until they would be the most subscribed channel until Jimmy's video was released. Jimmy had also gained exponential growth off of the video and the advertisement, which he had mentioned himself multiple times. T-Series did get growth from it too, but not as fast as PewDiePie was going.

Even after Jimmy advertised PewDiePie with billboards, it did not stop T-Series from slowing down from PewDiePie longer. T-Series was approximately 90,000 subscribers away from surpassing PewDiePie before Jimmy made another video to keep PewDiePie #1 most subscribed. On November 25, 2018, Jimmy says PewDiePie 100,000 times. At the start of the video, Jimmy tells his fans and new-comers to subscribe to PewDiePie and to help him win the war. The subscriber growth was given to PewDiePie once again, gaining 244,000 subscribers the day of Jimmy's upload, and 247,000 subscribers the next day.

Even after Jimmy helped out PewDiePie, PewDiePie made a tweet, It looks like this is it bois.[3] with a picture of a text saying Dawn of The Final Day 24 Hours Remain, in which PewDiePie now surrenders his number 1 most subscribed title, as T-Series growth had not stopped.

Jimmy also made a tweet responding to PewDiePie saying It was an honour fighting by your side, in which Jimmy gives up and can no longer help PewDiePie further, possibly to prevent lack of PewDiePie videos from Jimmy, as it can get weaker along the way.[4]

Advertising PewDiePie at the Super Bowl

At Super Bowl LIII (53), Jimmy bought seats by the end zone so he and his affiliates could wear shirts word by word saying SUB 2 PEWDIEPIE and was seen on T.V. by around 110 million viewers. ESPN tweeted a picture with Jimmy and his ad.[5] PewDiePie's growth grew to 50,000 subscribers to 277,000 subscribers in one day.

Jimmy has been heavily criticized for using clickbait to gain money and subscribers. Although he continues to do it, not much has changed from where he had begun. A YouTuber known as iox exposed Jimmy for starting several fake gift card giveaways by mocking other YouTubers (who have done such giveaways) at the end of his videos.

On April 4, 2018, a YouTuber is known as FlyyDoesYT posted a video claiming that Jimmy's videos are fake and only stars in the beginning (such as in I Tipped Waitresses $20,000 ) and that he has multiple employees who are miserable working for him. The next day, DramaAlert, had an interview with Jimmy about the situation and in response, Jimmy said that his videos are not fake, his employees love working for him, and he has spent at least $500,000 donating and giving out to people in his videos. He has also claimed that he has Crohn's disease and it was the reason why he was not in the entire I Tipped Waitresses $20,000 video. Fans have since defended Jimmy, and FlyyDoesYT has gotten negative responses over his video because of it.

Ever since Jimmy released his viral video, "Can 20,000 Magnets catch a Bullet Mid-Air?", which quickly became Jimmy's most viewed video of his in 3 days, the video became pretty controversial due to the thumbnail. The thumbnail does show Jimmy firing an AK weapon towards another person (Chris, Jimmy's partner), while it did not happen in the video. YouTube has made its Guidelines more strict about guns in videos and thumbnails, especially with it affecting Gun Channels. People say Jimmy's thumbnail is breaking YouTube's Community Guidelines because of what the thumbnail contains. People say it's misleading and harmful. Due to the criticism that followed, the thumbnail had been changed to not include the person on the opposite side. At the time before the video was removed, it had received a mass amount of dislikes ever recorded on Jimmy's YouTube channel at the time, at least a 25% dislike ratio, and a 75% like ratio.

The controversial video (although it was removed or set to private by Jimmy at an unspecified time) was reuploaded on June 31, 2019, by the fan posing as MrBeast's YouTube Channel, only with Chris being excluded from its thumbnail. Still, the video continued to remain available online.

Jimmy had planned a video for multiple YouTubers to win a 100 grand for a long time. It had finally been released on December 12, 2018, on the Jimmy channel. 12 YouTubers decided to join the challenge to win $100,000.

The rules were; You cannot lay down, you cannot sit down, you can't leave the circle regardless if you have 1 foot out, and you will be wearing a vest and having 2 lbs added onto the vest every hour to make it more challenging and tiring for the competitors.

On February 15, 2019, Jimmy announced he will be doing a real-life YouTuber battle royale on March 6; winner gets $100,000. It was an inspiration to Dude Perfect's Airsoft Battle Royale. Team Green won the challenge.

These are certain challenges Jimmy's friends have done, with high earnings.

On October 13, 2019, Jimmy stated that October 25 is going to be the largest YouTube collaboration of all time, with many creators replying to join the collaboration.[6] On October 25, Jimmy alongside fellow YouTuber and former NASA engineer Mark Rober announced that they will start a campaign to plant 20 million trees by January 1, 2020.[7] Jimmy had this idea after reaching 20 million subscribers, when his fans began requesting him to plant 20 million trees to celebrate the milestone, and to help restore forests lost due to recent forest fires. The campaign is conducted through the charity Arbor Day Foundation, and the campaign is spread through #TeamTrees, where every dollar donated is equal to one new tree being planted. Thousands of creators and artists, including PewDiePie, Alan Walker, Jeffree Star, Ninja, Jacksepticeye, DanTDM, TheOdd1sOut, and many more have donated and made videos supporting the campaign. On October 29, Elon Musk donated $1,000,000 towards the campaign, followed closely by Tobi Lutke donating $1,000,001 the next day. The goal was reached on December 20, 2019, but still allowed to keep increasing the numbers.[8]

Jimmy now makes random real-life videos that he considers dumb, but nobody has ever seen or done before. He would mostly do outdoor experiments, to see what would happen if he were to do a certain thing to certain objects, or world record videos, where he would, needless to say, break world records. The style of these random real-life videos are 'Creative Videos' (ex: Destroying My Friend's Car And Surprising Him With A New One), 'Experiment Videos' (ex: Can 20,000 Magnets Catch A Bullet Mid Air?), 'World Record Videos' (ex: 2,256 Miles In One Uber Ride), and 'Challenge Videos' (ex: Breaking Into The World's Toughest Safe).

Jimmy donates large amounts of money to small Twitch creators, such as his donation of $50,000 to Fortnite Twitch Streamer, Ninja to help St. Judes Cancer Research Charity. He had also donated $30,000 to Ninja to help the Suicide Prevention Center. Jimmy also donated the same amount ($30,000) to another Fortnite Twitch streamer, known as SpaceLyon. In addition to that, he has donated money to 'Attractive Twitch Streamers'.

Apart from Twitch, he has given thousands of dollars to homeless people. Including giving $10,000 tips to pizza delivery guys, and multiple videos of a similar fashion.

Jimmy's series, the Worst Intros On YouTube, was one of the reasons his channel had gained popularity. The series had about 70+ videos and is arguably the biggest reason he is popular on YouTube in the first place. In these videos, Jimmy showcases and rants on horrible YouTube intros, usually made by young people.

Throughout the series, he repeats the same jokes involving Asian people, bleach, leaving a child home alone with a phone, and explosions which he claims can be used to cure brain cells of cancer. Most of the intros were recorded on smartphones, with the YouTuber dancing in front of the camera with music that they make with their voice in the background, holding a sign that says their username usually on pieces of paper. To add even more insult to injury, you usually could not read what the sign says. He occasionally also stumbles upon troll intros made solely to become a part of his series. He also included Minecraft intros and Club Penguin intros in his series.

On March 28, 2018, Jimmy has private all his 'Worst Intros' videos. People believe it is because the series has died down and will full-time stick with real-life videos. He first privated one of his most popular Worst Intros videos and then did the same to the rest about a week later. On August 1, 2018, Jimmy private his last public worst intro video, 'WORST INTROS EVER', which had 20 million views and was once his most popular video before the growth of his real-life videos. However, some of it has been re-uploaded by other users.

Jimmy is also known for making fun of Minecraft, a game developed by Mojang. He made a two-episode series of it and was finished playing the game for good when his house got blown up by a creeper, the most famous antagonist in the game. Due to that incident, he deleted the game.

Jimmy has started to stream and record videos of himself doing challenges that take nonsensical amounts of time. This includes spinning a fidget spinner for 24 hours, reading the entire Dictionary, even counting to 200,000 (in two day-long halves so far; in a series that focuses on counting to a million), and reading the entire bible in one video. Ironically, Jimmy started playing this game back in 2012.

Quidd has often sponsored Jimmy for him to do his quite costly videos, which often helped him gain a majority of his growth. Because of Quidd, Jimmy made the longest Uber Ride (which was 2,256 miles from North Carolina to California) and 'Tipping Pizza Delivery Guys $10,000'. All of the money Jimmy had used in making those videos was from Quidd. Quidd also helped him make 'Donating $10,000 to random Twitch Streamers', 'Giving Homeless People $1,000' and 'Giving A Random Homeless Man $10,000', all gaining astonishing amounts of views.

CJ Donaldson
Add a photo to this gallery 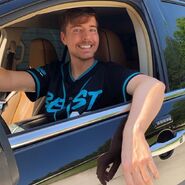 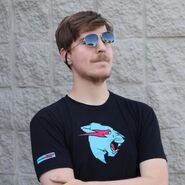 MrBeast and his 1 million light matches

MrBeast and his collaborators 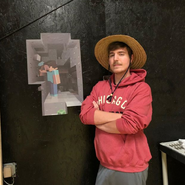 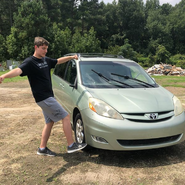 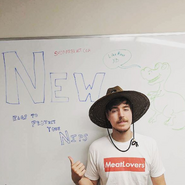 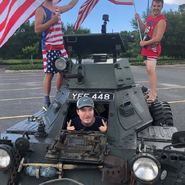 MrBeast owning a tank (with his 2 friends) 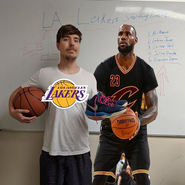 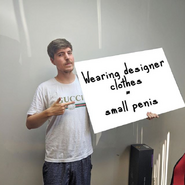 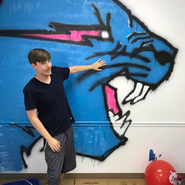 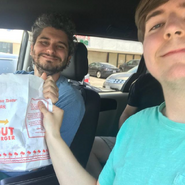 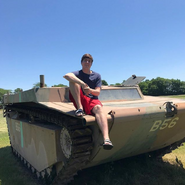 MrBeast and a tank 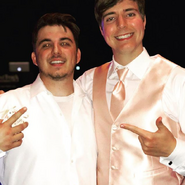 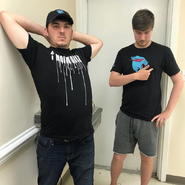 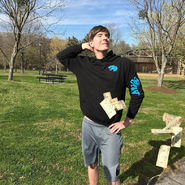 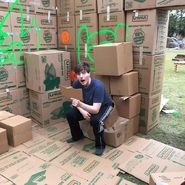 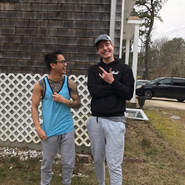 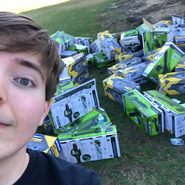 MrBeast and his 100 leaf blowers 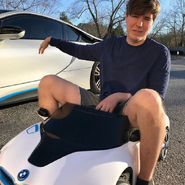 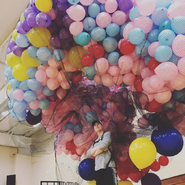 MrBeast and his numerous amount of balloons. 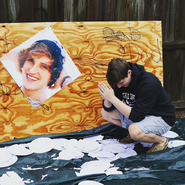 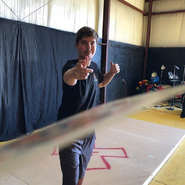 Retrieved from "https://youtube.fandom.com/wiki/MrBeast?oldid=631318"
Community content is available under CC-BY-SA unless otherwise noted.