Hannah Maud Hart (born: November 2, 1986 (1986-11-02) [age 33]), better known online as MyHarto (or simply Harto), is an American YouTuber known for mostly comedic videos. She is best known for starring in My Drunk Kitchen, a weekly series on YouTube in which she cooks something while intoxicated. She has done these videos with many other YouTubers, including Jenna Marbles, Grace Helbig, Tyler Oakley, the Vlogbrothers, and many more. Apart from her main channel, she also runs a second channel where she talks about life in general and gives her opinions on various topics.

My Drunk Kitchen traces its beginning to March 2011, when Hart was at her sister's home, chatting with a friend over webcam. Hart used her Macintosh computer to record herself drinking wine while attempting to make a grilled cheese sandwich without any cheese. Hart uploaded the video to YouTube as My Drunk Kitchen. Within a few days the video had accumulated 100,000 hits. Viewers began asking for another "episode" of the video, and Hart complied with more recordings. To establish the initial upload as the first episode of a series, she renamed it "Butter Yo Shit." By July 2011, My Drunk Kitchen had gathered 800,000 hits, earning Hart a YouTube partnership.

Hart has hosted several celebrity guests on My Drunk Kitchen, including British chef Jamie Oliver actress Mary-Louise Parker, video blogger Tyler Oakley, and author John Green, who subsequently wrote the foreword to Hart's cookbook. Comedian Sarah Silverman was also featured in the show in December 2014 in an episode which demonstrated the therapeutic and medicinal use of cannabis.

By August 2014, Hart's first episode "Butter Yo Shit" had 3.2 million hits. Her channel MyHarto had 1.6 million subscribers, and the total number of hits for all episodes was 126 million.

Hart has an older sister named Naomi and a younger half-sister named Maggie. Hart's mother suffers from psychosis, and her childhood home was inspected for human habitation acceptability. After high school, she briefly lived in Japan in the fall of 2006, before returning home. She attended college at Berkeley and graduated in May 2009 with two degrees; one in English literature and one in the Japanese language.

Upon her graduation, Hart moved to Brooklyn, New York, trying to pursue a writing career. She ended up proofreading Japanese and English for a Manhattan-based translating firm instead of her initial dream of writing screenplays. Within two months of launching her YouTube channel, she had become a YouTube partner and ended up quitting her 9–5 job in order to focus on My Drunk Kitchen.

She moved back to Los Angeles and lived with roommates until she moved into a house of her own in 2013. LA Weekly writer Sara Rashkin said that Hart has a "soft-butch beauty", and that a group of her fans call themselves "Hartosexuals". In September 2014 at the annual GLAAD Gala in San Francisco, she teamed with gay video blogger Tyler Oakley to present the first Ric Weiland Award to honor those who promote LGBT rights in the high-tech industry. Hart and Oakley announced the winner: Google's marketing chief, Arjan Dijk.

On October 18, 2016, her memoir Buffering: Unshared Tales of A Life Fully Loaded was published. Buffering debuted at #4 on the New York Times Bestseller list in the print hardcover category.

Hannah is a lesbian. She has engaged to Buzzfeed executive producer Ella Mielniczenko, who has been dating for a long time, and had plans to wed in spring 2020. However, due to the coronavirus pandemic, they rescheduled to autumn.[1] Her father and step-mother will not attend, due to it being same sex. Hannah revealed in this video that she was raised as a Jehovah’s Witness. 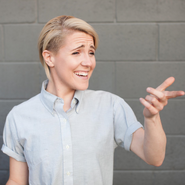 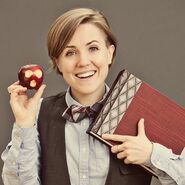 Retrieved from "https://youtube.fandom.com/wiki/MyHarto?oldid=702061"
Community content is available under CC-BY-SA unless otherwise noted.