NFKRZ is well known among the YouTube Drama community for uploading multiple rants on Keemstar, as well as No Bullshit. NFKRZ used to make MLG videos but then switched to commentary style videos similar to Pyrocynical.

Roman is now more well known for his videos regarding Russian culture, as well as his vlogs around Russia and neighboring countries.

NFKRZ was born and raised in Chelyabinsk, Russia.

NFKRZ created his YouTube channel on August 31, 2010, but started uploading since October 22, 2011. His first upload was "biggest TF2 noob ever? lol".

His content gained traction when various videos of his where he talks about Russian influencers went viral, gaining him a following of people interested about Russia's culture. Since then, uploads talking about Russia's unique and sometimes bizarre culture have dominated his uploads in recent years, as viewers from Western countries has shown interest in NFKRZ's take on Russian political and social issues that rarely get talked about in Western countries.

He is friends with Pyrocynical, Dolan Dark, Jameskii, and BamanBoi, sometimes recording Counter-Strike: Global Offensive together with them in his early career.

NFKRZ has done multiple collaborations with Bald and Bankrupt where he showed him around his city of Chelyabinsk in Russia.

His old YouTube profile picture was a Yoba, which stands for "Youth Oriented Bydlo Approved", Bydlo is a Russian word for rednecks. It features a black cap with the Russian flag printed on the front and is also wearing a black hoodie.

His current YouTube profile picture is a black and white photo of him photoshopped in front of a Russian "commie block".

Roman leans on the left side of the political spectrum and has expressed support for gender equality, racial equality, LGBT rights, abortion and refugees/immigrants in the past. He is anti-war and condemned Putin for invading Ukraine, making videos saying that ordinary Russians say no to war.

He went on hiatus on February 24, 2022 due to ongoing war between Russia and Ukraine, saying that he does not feel that it’s okay to keep entertaining with the current situation. On March 16, 2022, he announced through his Telegram channel that he left Russia for an indefinite amount of time and is currently stationed in Tbilisi, Georgia.

On December 1, 2018, Roman uploaded a video titled "The Quadeca KSI Diss Track is FAKE" in which he gives reasons as to why the beef was staged and also called Quadeca's diss track "trash". The video received negative reception and Quadeca himself responded by commenting on the video which said "The "beef" between me and JJ isn't fake. It's not that deep but it's also not contrived. I've never spoken to JJ in my life in any form. I just saw his podcast where he was talking a bunch of shit and made the song as a response. Though he may have wanted the big controversy all along, and I just played into his scheme, but I never spoke to him or anybody behind the scenes. The reason I didn't try and "ruin his career" in my diss track is because he wasn't going in on anything personal for me, he was just talking about music and content. I thought that would have looked stupid as fuck if he was like "I think your music is trash" and I reply with "You have 12 kids and are addicted to crack" u feel me. I think he was planning on ignoring my diss track and just focusing on the Randolph Deji shit, cause he didn't react to me for a while, and pretended he didn't know who I was, but it got so big that he saw he could turn it into a good clout opportunity so i guess that's what we doing now. So in conclusion it's not fake but it's not that deep u get me. At least that's how it seems from my perspective. idk about the Randolph and Deji one tho lmaooo"

He has had multiple feuds and debates with controversial ex-YouTuber Lt. Corbis due to their opposing political views.

Roman released a number of joke tracks on his YouTube during his early career, including Can't Touch My Swag, which uses the beat of Tyler The Creator's Yonkers and mentions MLG Montage Parodies. The next piece of music he released was his Keemstar Diss track, Using the beat of Drake and Future's Jumpman, he critiques Keemstar, bringing up the infamous Alex quote, and much more. He then released Click To Bait, which brings up how people say that he and other commentary channels are Clickbait, this track uses the beat of Drake's Back To Back. His then released Zoie Burgher (Diss Track), Which as the title suggests, is a diss track on Zoie Burgher, who sparked drama with a group of NFKRZ friends. NFKRZ (Along with Filthy Frank/Pink Guy Is featured on theneedledrop's Cal Chuchesta's version of "Panda", originally performed by Desiigner.

He also started a music project under the name of Lil Vodka in October 2017, and his first track is called LEPS which was released in November. Lil Vodka was later dropped as a persona.

He calls his fanbase The Blazers.

NFKRZ started 2 memes: "Use code NFKRZ", which was a mocking representation of Keemstar's Use code KEEM for G Fuel. The second meme was "Buy me Overwatch Mafia 3", whose root or reference cannot be found, but NFKRZ tweeted this to both Pyrocynical and PewDiePie. In response, Pyrocynical jokingly bought him Grand Theft Auto 3 and the gameplay video can be found on NFKRZ's channel.

Despite having extremely good English pronunciation in comparison to the average Russian, he has always been mocked many times for by individuals who cannot understand his English, and his viewers used to roast him in the comment section of his videos, often commenting: "Give subtitles, Ablo Pigman", and "NFKRZ, I can't understand you". He has also been called an ablo, which most likely comes from a YouTube video posted by Zathandrapus, titled "Orman ablo drives his car". NFKRZ also jokes about it sometimes.

Roman went to Chelyabinsk State University, majoring in linguistics and translation. He has asthma, making him exempt from Russia's Mandatory Military Service.

In 2021 he was vaccinated using the Sputnik V vaccine against COVID-19. 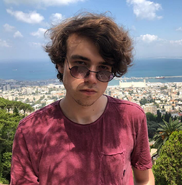 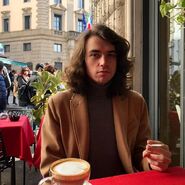 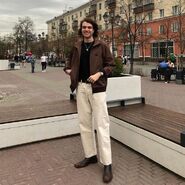 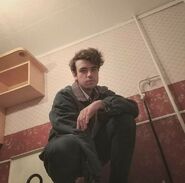 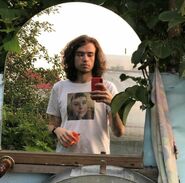