Nicole first started her music career in 2010. Her single came out in 2013. In 2015, Nicole made a controversial video named: Dear Fat People. A lot of famous YouTubers made response videos. After the video became viral, she got a bad reputation due to her YouTube content.

In September 2015, Arbour became the subject of controversy when she posted a viral video on her YouTube channel titled "Dear Fat People". Critics argued that the video endorses fat shaming. The video was temporarily unavailable on YouTube, over claims that it violated the YouTube terms of service, but was later restored.

Arbour was the subject of both public and celebrity criticism, with model Ashley Graham labelling her comments as "disgusting". Director Pat Mills fired Arbour from an upcoming movie after seeing the video and was quoted via several sources, "I'm gay. I was bullied a lot as a kid. I am no stranger to ridicule and loneliness... It's fat-phobic and awful. It went on for over six minutes. I felt like I had been punched in the gut. I was so upset I was shaking like Shelley Duvall in The Shining". On September 10, 2015, Arbour, via Twitter denied ever having any form of involvement in the film. She then reiterated her response in 2019, confronting the director.

Soon after the video, Arbour was fired from her job where she was a choreographer for an anti-bullying video for kids. The director of the film she was hired to work on said it "made me never want to see her again".

On September 16, 2015, Arbour appeared on The View to defend her actions in the "Dear Fat People" video, stating while on the show "that video was made to offend people...it's just satire," and that the video wasn't supposed to be taken seriously. Time cited an interview stating, "Arbour doesn't see her comments as bullying, but rather an intense form of truth-telling". Arbour was quoted in the Time article, defending her actions:

I find seeing someone's head being blown off offensive ... I find children starving in a country with more than enough food offensive. I find women's bodies being mutilated for religious purposes, that is offensive to me. But words and satire I don't find offensive.

MatthewSantoro uploaded a video entitled "My Abuse Story" in which he claimed that Arbour abused him, although she was not originally named in the video. The nature of the abuse abuse was physical and physiological. He said that the video was meant to be private, but was accidentally made public. The original video has since been removed. She denied the allegations in a second rebuttal in 2019, saying the first one was scripted by her manager.

Nicole was friends with musician Ryan Upchurch. The friendship ended when Ryan forgot his wallet at Nicole's apartment and his manager asked for it back. Nicole refused to give the wallet back and Ryan called the police on her.

Nicole was a repeat guest on Candace, a talk show hosted by Candance Owens[1]. Nicole defended Chrissy Teigen from being cancelled despite insulting her a year prior. Candace disagreed with her due to the severity of Teigen's actions (she goaded a child to attempt suicide), and Nicole walked off of the stage. Nicole then called Candace and all conservatives 'pussies', then claimed Candace was trying to cancel her. Candace responded by calling Nicole a pathological liar. 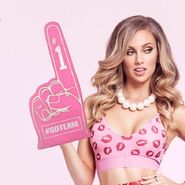 Add a photo to this gallery
Retrieved from "https://youtube.fandom.com/wiki/Nicole_Arbour?oldid=1143026"
Community content is available under CC-BY-SA unless otherwise noted.