Nogla began his YouTube channel on January 16, 2012 to post gaming commentary videos. Whenever he plays Garry's Mod, he usually plays with a Zoidberg character model, in which his friends make fun of his wide eyes and appendages hanging from his face.

Nogla is skilled with the guitar and has made several songs. He has posted videos of him peforming those songs.

After Brian (Terroriser) began using his soundboard. Nogla became his primary target. He would use Nogla's recorded lines to annoy him and others. 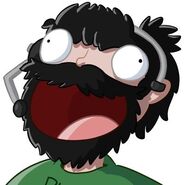