Okayu Nekomata (born: February 22, 2005 (2005-02-22) [age 16]) is a Japanese VTuber affiliated with Hololive. She is part of its subgroup Hololive GAMERS along with Korone Inugami, Fubuki Shirakami and Mio Oogami.

She debuted on April 6, 2019. She is known to greet her viewers with "Mugi! Mugi!" the Japanese onomatopeia for chewing food. Okayu's next video after her debut was an ASMR video[1] of her whispering. She has streamed the games The Legend of Zelda, Mother 2, APEX Legends, Shadow Corridor, Super Mario Bros. 35, Super Mario Story, 60 Seconds, Rat Simulator, Getting Over It, Donkey Kong 64, Octopath Traveler, Mother 3, Jump King, Untitled Goose Game, Pokemon Unite and Monster Hunter Rise.

Her first collaboration was with Subaru, and her next was with Shiina Yuika. Her third collaboration and first chatting stream was with Korone Inugami[3]. Korone and Okayu are quite close and have featured each other in their streams quite frequently, and were close friends prior to joining hololive. Okayu has said that Korone is like a sister to her and she helped her with her grandmother after she was suffering from declining health. She has also admitted that when she gets the urge to kiss someone she kisses Korone.

Shion and Okayu's first collaboration was a chatting stream but later they played Onryeo together, and she has played Clubhouse 51 games with Pekora. She also collaborated with Mio to sing Otona no Okaite which became Mio's most popular video. Her chatting streams have also featured Kanata, Botan and , and she has held a singing stream with Towa.

She has also played Among Us with Hololive Gamers, Botan, Kanata, Sakura, Polka, Rushia, Subaru, Luna and Marine, and Garctic Phone with Fubuki, Mio, Aqua, Marine and Shion[4][5][6].

A cat being raised by an old woman that runs an onigiri store. She streams from the computer in her grandma's room.

Okayu and Korone appeared in Molly Online Crane Game. On February 17, 2021, Rakugaki Kingdom's Twitter account tweeted that Okayu, by mid March, would be one of the VTubers who would appear in the game.

In January of 2022, Okayu partnered with Ikinari Steak house[7]. This led to masses of customers arriving to the restuarant, and it had to shut down due to not having enough food for all of them. 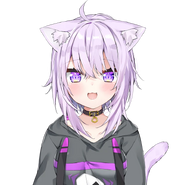 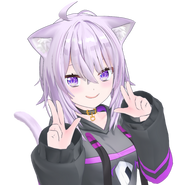 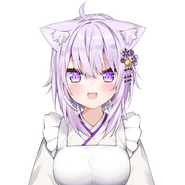 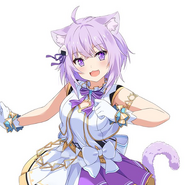 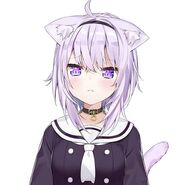 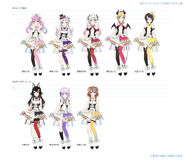 Illustration for the Nonstop Story concert

In the Ochame Kinou music video 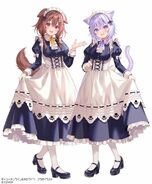