List every Thursday
Show of the Week every Friday

outsidexbox, or Oxbox, is an English YouTube channel which is hosted by Mike Channell, Andy Farrant and Jane Douglas.

outsidexbox are a partner of Eurogamer whose hosts all have backgrounds in gaming media, with Andy Farrant previously hosting Inside Xbox, Jane Douglas working as a writer and interviewer for Gamespot, while Mike Channell worked for Eurogamer and was deputy editor for The Official Xbox Magazine.

They are primarily known for their weekly show, titled Show of the Week, their Let's Play videos, their annual Christmas challenge, and list videos which (as of 1st August 2017) is entitled 305 Game Videos to Watch Before You Die - one notable aspect of these lists is they include games which are exclusive for Playstation or Nintendo consoles or PC, which invariably leads to at least one person in the comments section demanding to know why The Last of Us is getting mentioned on a channel with Xbox in its name.

A former pastime of the channel is playing Minecraft Pictionary, although since mid-2013, it has been reserved primarily for longer livestreams commemorating special events. The first two of these were to celebrate the 250,000 subscriber milestone and when the three hosts played live on stage at EGX 2015, with more recent appearances celebrating the channel's sixth birthday in 2018 and in support of a fundraiser for the War Child UK charity in late 2019.

Show of the Week

outsidexbox have a weekly show, Show of the Week, which is posted regularly on Fridays and has been since the first edition[1] on August 24th 2012 (which was ten days after the channel's first video was posted).

The format starts with two of the hosts on the Oxbox sofa discussing the game of the week, which in the case of the first episode was Sleeping Dogs, before one of the hosts leaves the sofa to join the third host either in the kitchen or, from the January 17th 2014 to the January 11th 2019 editions[2][3], the prop room to read viewer comments. Since the March 6th 2015 edition[4] the show has a cold open on the sofa.

In the 21st February 2020 edition of SOTW the team announced that would be trying something new with the show's format, namely hosting a live version of the show the following Wednesday (26th February 2020) as an experiment which, as Andy phrased it,[5] would either work or be a hilarious failure.[6]

The current theme for Show of the Week is World Map from the YouTube Audio Library.

On October 19, 2016, OutsideXbox unveiled their second channel Outside Xtra, a channel devoted to wider gaming culture hosted by former XboxOn host Ellen Rose (who has her own YouTube channel[7]), and previously made a guest appearance on Oxbox in late September 2016 playing Rise of the Tomb Raider co-op with Andy[8]) and CNET editor Luke Westaway.

Since 2017 the combined outsidexbox and Outside Xtra teams have played a campaign of Dungeons & Dragons, initially in pre-recorded videos filmed at the Loading Bar in London, but as the series grew in popularity the Oxventure has been performed live, with adventures performed at the Vault Festival, EGX, EGX Rezzed, PAX East and the MCM Comic Con in both London and Birmingham, with the adventures being shown on YouTube a few weeks later.

In November 2019 it was revealed the Oxventuers Guild had recorded a Christmas single, Literally Everyone Else In The World,[9] raising money for mental health charity Mind. This also led to the channel getting noticed by British newspaper The Guardian in their piece on D&D[10] while CNET wrote a piece dedicated to the song itself.[11]

A pirate rogue played by Andy, previously known as Corazón de León (or, his real name, Percival Milquetoast), Corazón is the captain of the Joyful Damnation and remarkably boastful about his feats...even though these feats were either carried out by his fellow Oxventurers while he was hidden behind a barrel or simply made up. When not proclaiming his greatness, Corazón mainly spends his time pilfering gold coins and other valuables like any legitimate aquatic businessman would.

A tiefling warlock played by Jane, who was abandoned as a child due to her half-demon nature and was taken in by a hermit warlock before entering a pact with Cthulhu during her adolescent years, Pru is a perfectly reasonable and charming member of the party. Except when she's unleashing an Eldritch Blast upon her foes at the earliest opportunity. Or when she is spider climbing up sheer walls just because she likes it as the ability looks creepy. And maybe don't ask about the Hunger of Hadar...

Half orc bard played by Luke, Dob sees himself as the heart of the party - although there are times where the other members of the Oxventurer's Guild would disagree, for example his habit of infuriating Corazón by dumping the guild's gold in various lakes or offering to accept quests for free, or when he caught Merilwen in his Thunderwave attack, and then there's that one incident where he inadvertently tasked a group of cursed skeletons to build an orphanage that used the orphans as the mortar holding the bricks together...

Wood elf druid played by Ellen, at first she was seen as the most kind hearted and gentle member of the Oxventurer's Guild due to her quiet and unassuming nature and her connection with both nature and the animals of the forest. However, as she's leveled up, Merilwen has become a force to be reckoned with as demonstrated by her Wild Shape ability initially enabling her to turn into a cat now also allows her to turn into a bear, and while she and Corazón will forever argue about who was responsible she was the main architect of what has become known as Merilwen's meat Grinder...

Dragonborn paladin played by Mike who claims to be searching for atonement in order to be readmitted to The Noble Order of Le Dragon D'or, however his quest for atonement doesn't appear to be going well due to his fondness and willingness to solve any problem that comes the party's way using either his Flame Breath or a seemingly endless supply of bombs that he made himself, which may also explain why he needs to find atonement in the first place.

Literally Everyone Else in the World

Played by long-serving (and long-suffering) DM Johnny Chiodini, it's Johnny's job to lead the Oxventurers through his various quests where, inevitably, his initial plans are derailed either by the Oxventurers avoiding the epic battles he had planned either by weaponising a whale (yes, that comment does make sense in context) or Merilwen literally talking them out of a battle by using Animal Friendship on an Owlbear. When not seeing his carefully laid-out plans go out the window, he also plays an array of characters ranging from Curly Joe and the rest of the cursed crew of the Joyful Damnation, infant scholar Alfred Strangetide, guide and pineapple-hater The Wizard Binbag, Lady Fyengeh and her infuriatingly upbeat jester Flannery, the sixty cursed skeletons that make up Ethilfrith's Chosen, and the cult-like order of The S'ag Lads.

During the course of the channel's existence there have been various series, some of which are permanent fixtures while others have finished

As part of their Gamescom 2017 coverage, a livestream of Mike and Jane playing Player Unknown's Battlegrounds was posted to their channel.

Since 2013 there has been an annual contest between the three presenters where each is set a series of four challenges on a variety of games, and the host with the highest score at the end of the twelve days wins Christmas.

Jane has a masters degree in physics - which she mentioned in the video where she discusses the physics of Bioshock Infinite[12] - and has an interest in science, as demonstrated by her knowledge of space travel in the video 5 Times Games Got Space really, Really Right.[13] She also revealed she has a degree in physics during the - while in early 2017 she underwent training[14] with the European Space Agency[15] as part of a promotion for Mass Effect: Andromeda.[16]

The best way to describe her playstyle is to e-mail the United Nations and ask what their definition of a War Crime is, considering some of her highlights include rampaging through a fortress on the back of an elephant while machine gunning Golden Path troops in Far Cry 4, advocating shooting the healer in Overwatch, and while playing GTA Online has seen her singing happily to herself while headshotting enemies with a sniper rifle during one of the heists as well as going on a rampage with a broken bottle, while she and Andy came remarkably close to giving Ellen a potentially fatal dose of nutmeg[17] as a result of misreading the recipe for the Royal Conservatory Cooler from Dishonored 2.

Outside of the Oxbox bubble Jane has appeared on the BBC documentary Are Video Games Really That Bad? in 2015, presented the award for Persistent Game to the creators of Prison Architect at the 2016 BAFTA Games Awards, and co-hosted the 2016 BAFTA Young Game Designer awards.

Jane also has a cameo in the 2018 movie Ready Player One, and can be glimpsed in the film's official trailer.[18]

Andy has an interest in history, saying how he enjoyed making videos about pirates (which Assassin's Creed 4: Black Flag allowed him to do on a couple of occasions[19][20]) and was also brought up in the 1000th Video Special[21] and his masters degree has been brought up in one of their list videos[22].

Of the three hosts, Andy is the most adept at stealth games, as evidenced by his demonstrating the Ghost playthrough on Splinter Cell: Blacklist and non-lethal playthrough on Dishonored - although he is let down by being utterly petrified when playing horror games, most famously Slender: The Arrival. He is also the one who wins pretty much every contest the hosts take part in, being a two-time winner of Christmas for the Oxmas Christmas Challenge in 2014 and 2015, winning the games charades in the 2014 and 2015 Christmas episodes, as well as winning the quizzes about their combined inability to stealth, Fallout 4, their horror responses, how they died playing GTA Online, and various hits in the Hitman franchise.

Away from Oxbox, Andy co-created the series of animated shorts Cornelius & Toots: Paranormal Investigators[23] which he writes and provides several voices for, while before Oxbox he was a member of the band Capisce.[24]

Mike has an interest in cars, narrating videos about some of the cars available in Forza Horizon 2[25] and Project CARS[26] as well as showing his knowledge in 7 Times Cars Don't Work That Way, You Guys.[27]

In the summer of 2018 he took part in his first-ever racing series, with the YouTube channel Carfection[28] recording his progress. He describes himself as not having a stealthy bone in his body, which has regularly caused problems in various Let's Plays, most famously his grenade gaffe while playing Payday 2 - although this didn't prevent him from beating Andy in the Assassin's Creed quiz when his knowledge of bombs in Assassin's Creed 2 saw him finish with more points than history buff and stealth enthusiast Andy.

Mike has a habit of remaining eerily calm when playing horror games, even though Jane and Andy regularly get freaked out by jump scares while sitting right next to him - with the obvious exceptions of Alien Isolation[29] and what what the NBA 2K15 face scan[30] came up with when presented with Jane's face. 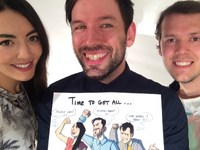 With some fan art, which can be seen in the prop room 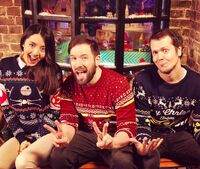 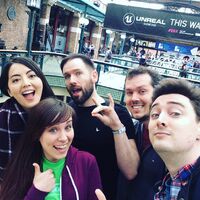 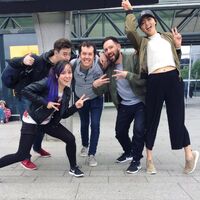 The full OX crew preparing to depart for E3 2017 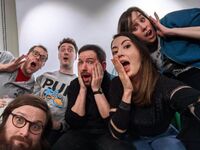 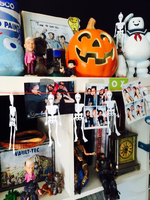 Andy and Mike outside the US Bank Tower, and their GTA Online avatars in the equivalent place 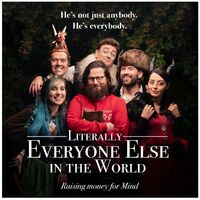 Mike, Jane and Andy appearing as an easter egg in Hitman 2

*doffs cap*
Add a photo to this gallery

Retrieved from "https://youtube.fandom.com/wiki/Outsidexbox?oldid=660541"
Community content is available under CC-BY-SA unless otherwise noted.