Brooke Leigh Thorne (born: August 6, 1987 (1987-08-06) [age 34]), better known online as PressHeartToContinue, or Dodger, is an American video gamer, former vlogger and "Let's Player", who makes weekly gaming news videos and let's plays, who grew up on a farm in Oregon. The nickname Dodger originates from the musical "Oliver". Her career started on a channel called "Tw33k5", in which she created a single video called "OMG HUSKY!! U R TEH BOMBZORS", which she made in response to her friend HuskyStarcraft.

Now she is the owner of two channels, her main channel, and her vlogging channel DexterityBonus. She was also a regular host of many shows on the Polaris channel such as The Daily Byte, Sort This!, The Co-optional podcast and Friend Zone. Ever since leaving Polaris, Dodger dropped her duties as host and only continues as a member of The Co-Optional Podcast.

Brooke is one of the four standard members of the weekly manga podcast known as Mangapod Book Club, in which she, HappiLeeErin (Erin), LouTalksAnime (Lou), and YokuramaGameTalk (Yokurama), gets together every week and discusses all or part of a manga together, live, the video being posted on Erin's channel in the end. Her birthday-choice-pod in 2015 was Naruto.

Her main channel is used for Gaming Newz, which she uploads every Sunday. She also does Let's Plays of various games, including dating sims like Hatoful Boyfriend and past streams of games like Dark Souls II, which Dodger uploads all throughout the week. On Fridays she alternates between uploading Welcome to the Fandom in which she discusses a certain piece of media and the fandom surrounding it and Swords and Stitches, where she and her friend Aaron do DIY crafts that are often video game themed. She also has a series called 1-Cup in which she plays a game for one session.

Dodger's side channel, DexterityBonus, also known as Dexbonus, was used for her daily vlog show, Coffeh Time in which she used to drink coffee (or other beverages such as, tea and water as well as Mountain Dew and root beer on special occasions) and talked about her day. She was occasionally joined by her friends and occasionally uploaded Q&As where she answered three work-related questions, three personal-related questions, and three silly and random questions submitted to her through Twitter.

"Coffeh Time" went on hiatus for a few months in 2015 and during 2016 Dodger stopped the daily vlogs. Although few more episodes of Coffeh Time were uploaded, starting in 2017, the channel has been used as an archive/repository for all the unedited vods of her Twitch streams.

Dodger was one of the founding members of the manga discussion Podcast known as MangaPod Book Club, along with FightingforNippon, HappiLeeErin, and YokuramaGameTalk, and is still one of the standard members of the podcast today. 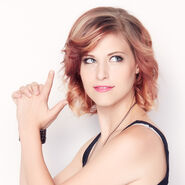 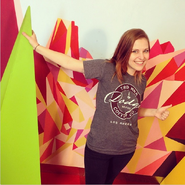 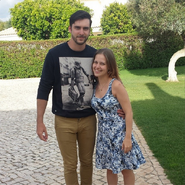 Dodger and her husband, Sam
Community content is available under CC-BY-SA unless otherwise noted.
Advertisement