Preston Blaine Arsement (born: May 4, 1994 (1994-05-04) [age 28]), also known as TBNRFrags and PrestonPlayz, is an American YouTuber which he is known for a variety of content including challenge and prank videos, as well as his Minecraft, Fortnite, Roblox and Among Us gaming content. He currently lives in Dallas, Texas[1] and is married to fellow YouTuber Brianna. He is part of the group with his Minecraft friends called The Pack who play Minecraft together with MrWoofless, Lachlan, Vikkstar123, JeromeASF and Bajan Canadian.

TBNR in his username, TBNRfrags stands for "The Best Never Rest". The TBNR squad is made up of PrestonPlayz and his 2 friends, TBNRKenWorth and ChocoTheChocobo who were friends before he started YouTube. He is one of the 32 YouTubers to be featured in Kris Madas' YouTuber Intro Challenge. He is also one of the YouTubers to have their intro in it.

Preston Arsement was born on May 4, 1994 in Dallas, Texas to his mother and father. His parents divorced and his mother remarried when Preston was three months old. He said he has no desire to meet his biological father. He studied at the Travis Academy of Fine Arts and graduated from high school a few days after his 17th birthday. He also previously worked as a lifeguard before becoming a full-time YouTuber.

Before he became a full-time YouTuber, he was going to college and become a surgeon. During the summer after graduating, he started having 2nd guesses about becoming a surgeon. Preston stated that the summer started going downhill fast. He got into some bad stuff and started lying to his parents. It was around this time that he decided that college wasn’t really for him.

After thinking about what to do with his life, he finally decided to return to his YouTube channel, TBNRfrags, which at the time had around 200 subscribers. As his YouTube channel grow, he started uploading and livestreaming more and more until eventually Machinima reached out and partnered his channel.

It was at this time that Preston and his parents realized that YouTube could become a career for him that he made money from, but more importantly it could be a career that he loved and from that point on, Preston has became a full-time YouTuber.

He has four brothers and one sister: David, Daka, Keeley, Caleb, and Joshua. Keeley, Caleb, Joshua and his father all have their own channels: KeeleyPlayz, TbnrCJ, TBNRJosh, PapaFrags, and Brianna, respectively.

One of his cousins, Landon, also runs a YouTube channel called Landon, originally a Minecraft-based, but as of January 2018, he announced his channel was changing to strictly Fortnite and vlogs. All in all, he has a very good relationship with his family.

Preston currently lives in Dallas, Texas, presumably near the rest of his family. He is Christian, as he refer to Jesus Christ in almost every of his social media descriptions. In 2016, he started dating an LA-based YouTuber called Paige.

She also has a channel called turnthepaige, which as of April 2020, has over 80,000 subscribers. This was confirmed on April 18, 2016, though in February 2017, Preston and Paige sadly broke up for an unknown reason, though they are still very good friends. Preston later got engaged to Brianna Barnhart in October of 2017 and they were married in May of 2018.[2]

They have multiple Q&A videos and vlogs featuring his wife and family on his main channel. Brianna is a nurse who enjoys singing and acting and is enthusiastic about Preston's occupation of YouTube. She has appeared in many Minecraft, Fortnite, Roblox and Among Us videos on his channels, and she has her own channel called Brianna.

Preston now has 8 channels other than his main channel currently. Some of them include TBNRFrags and PrestonGamez.

PrestonGamez (formerly PrestonRoblox) is the Roblox channel. As of today, he only posts Roblox content on the channel but he might start posting other games, as he changed the channel's name from PrestonRoblox to PrestonGamez. However, this channel hasn't been uploaded in over 9 months.

PrestonCosmic is the Cosmic channel. He posted the Minecraft Cosmic videos content on this channel, which includes Cosmic Sky and CosmicPvP. However, this channel is inactive and hasn't been uploaded in over 9 months.

PrestonGamez was originally supposed to be his channel for non-Minecraft related games, though it continues to have no uploads to this day.

PrestonShorts is the Short channel. He posted the short videos content in real life with TikTok for challenges, pranks and more.

PrestonCartoonz is the Animation channel. He posted the cartoon animation videos with his wife, Brianna. The videos posted every Friday with the new episodes coming out soon. However, this channel is inactive and hasn't been uploaded in over months.

PrestonReacts is the Reaction channel. He posted the reaction videos for a miscellaneous content in which he haven't seen before or recently.

Preston owns a Minecraft server called CosmicPvP, along with another YouTuber, MrWoofless. The server opened in 2014 and with many gamemodes, including Factions, HCF, and KitPvP. He has played on this server many times on his channel, especially in his factions series.

The Pack and Friends 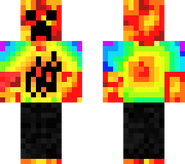 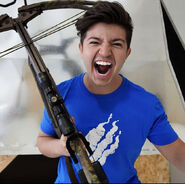 Preston with a crossbow. 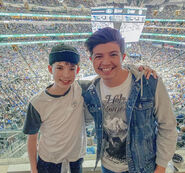 Preston with his brother Joshua.

Preston VS Logdotzip VS Unspeakable VS Moose 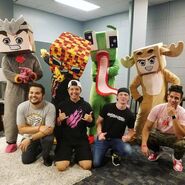