Alexis "Alex" Maldonado[1][2] (born: December 28, 2000 (2000-12-28) [age 21]),[3][4] better known online as Quackity (formerly QuackityHQ), is a Mexican YouTuber who is known for hosting competitions on his Discord server, mainly his "Discord's Got Talent" videos, which usually feature other YouTubers as hosts such as KSI or MrBeast.

He is also known for his Twitch raids on online game communities, his commentary videos in which he used to use text-to-speech to narrate, and being a member of the Dream SMP.

Quackity was formerly known for his videos of the now-closed game Toontown Online and its successor, Toontown Rewritten. One of his former profile pictures is reminiscent of his character in the game despite not playing it anymore. He changed it around mid-2019 to a picture of himself.

Quackity used to release Club Penguin videos on two YouTube accounts: one of them was named "DjYeroc123", while the other one remained anonymous for his viewers.

Quackity has a Discord Server with over 400,000 Members, where he sometimes hosts competitions, like Discord's Got Talent, Discord's PhotoShop Hunger Games and more.

Quackity joined the DreamSMP in August 2020 after TommyInnit suggested that he should be added on the server, he has played crucial part in the server mainly by running as a candidate for presidency of L'Manberg. He made his own political party #SWAG2020 (so we are gamers) with his running mate GeorgeNotFound, together they competed against Wilbur Soot and TommyInnit's political party #POG2020 (politicians of gaming). Later on they had a presidential debate. After that Fundy and Nihachu created their own party #COCONUT2020, Jschlatt also made his own party, #SCHLATT2020. On the day of the elections, #COCONUT2020 got 9% of the votes, #SCHLATT2020 got 16% of the votes, #SWAG2020 got 30% of the votes while #POG2020 got 45% of the votes, however, turns out #SWAG2020 made an agreement with #SCHLATT2020 to pool their votes together no matter what, and formed a coalition government. in the end, #SWAG2020 and #SCHLATT2020 won for having 46% of the votes. Quackity then became the Vice President and had the "fattest ass in the cabinet". After being mistreated by Schlatt for not listening to his opinions, he joined Pogtopia. More information about his involvement in the server can be found in this wiki page.

He made a hashtag while doing a raid on Animal Jam on December 22, 2018 the hastag was #duckYOUAnimalJam, and it started trending worldwide, he got his account IP unbanned then.

Unlike other raids, he told his viewers not to raid the Discord server of the Animal Jam admins, since it was against their wishes, rather than letting his viewers or himself go too far like previous times when they would also raid forums.

On December 31, 2018, while in a call with friends Kwite and Aksually, Alex reported that his account logged out on its own and he was unable to log back in. He didn't make a remark publically until January 13 and two days later, he uploaded the video "I GOT BANNED FROM DISCORD". In it, he shares portions of an email conversation between himself and a member of Discord's moderation team. The screenshots stated that the ban was put in place after "multiple reports" from Discord users for "violating" Discord's Community Guidelines. At the end of the video, he requested his account to be unbanned, a professional response to his emails requesting server ownership transfer, as well as the need for reviewing the Trust & Safety Team. He urged his followers to use the hashtag for Twitter called #DiscordUnbanQuackity, which temporarily trended worldwide in second place just below #Brexit.

On January 16, 2019, Kwite uploaded the video 'Why QuackityHQ Was Really Banned From Discord' which summarises Quackity's video and repeats the requests Alex made. He also made a follow-up video that Alex was still banned and gave reasoning on why he made the video as well as giving counter-arguments to people who had different opinions, plus highlighting to still tweet the hashtag out.

Friends FPSDiesel and Kappa Kaiju also made videos about the situation, in which they talk about how "the moderator used words he himself didn't understand" and how there's proof the same moderator has been unprofessional and biased in the past. While Kappa didn't mention his name, Diesel did, but that's the only reason behind it.

On January 23, Alex tweeted: '"Discord has seen "I GOT BANNED FROM DISCORD". I just received an email from them with important information. I'll be making a video on this, so PLEASE do NOT tweet the hashtag to Discord anymore. Thank you guys for all the support!"

Just 3 days later he uploaded the video DISCORD RESPONDED TO MY VIDEO, stating that the director of the Trust & Safety Team responded to him in a more formal e-mail. The earlier second reason behind his ban has not been mentioned, proving that the moderator who e-mailed him first indeed had a personal bias for the ban. Nonetheless, his original account is still banned because allegedly, people discussed raids on Discord. However, he was still given his server ownership transfer.

Quackity's videos are well known for their intense and fast-paced edits. Quackity often edits his own videos using Sony Vegas Pro, as seen in several tweets and Instagram stories showing him editing videos such as Discords Got Talent. However, it is known that some of his videos are edited by other people. 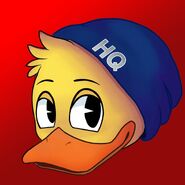 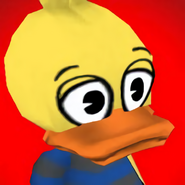 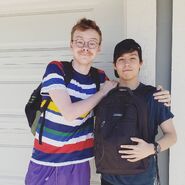 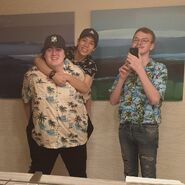 Alex with Hooverr and Aksel. 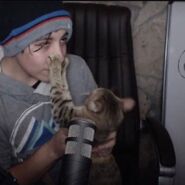 Alex and his cat named Tiger 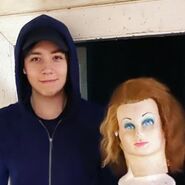 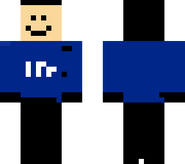 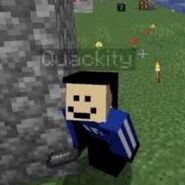 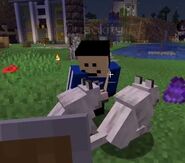 Quackity with wolves in a Minecraft video