Mika Midgett (born: August 30, 1994 (1994-08-30) [age 27]), better known online as RIPmika (formerly known as SirenMika, sometimes referred to as Meeks), is an American YouTuber, streamer, singer, record producer, and film composer best known for her gaming/music content on her channel. She also composed the score to the Universal Pictures film Distant.

She was born on August 30, 1994 in North Carolina, United States to an American-Czechoslovakian family. She also shared her love of movies, anime and K-pop as a child and currently is continuing to share her love to the world. Her birth sign was and is Virgo. She did not attend college and moved to Los Angeles after High School. She dated fellow gamer CrankGameplays from May 2018 to August 2020. In September 2021, Ethan (CrankGameplays) confirmed on a Twitch stream that they were in a relationship again and living together.

She created her YouTube account in 2012, but she didn't start uploading videos until 28 April 2020. Within One month, she gained a total of 15,000 subscribers on her channel. Currently, she has a total of 27K subs and every once a while uploads on her YouTube channel.

X Life is a modified SMP — created by Dangthatsalongname — where players start with one heart and the objective of the server is to survive with 10 lives. Losing a life adds one more heart to a player's health, and a player is eliminated from the server if they lose all of their remaining lives.

Slay Them Down is a Minecraft parody currently under development by RIPMika. it is a parody of The Rolling Stones' Paint It Black. It is planned to be released on July 22, 2021, Although it may be postponed due to the COVID-19 Pandemic. 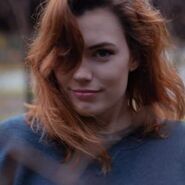 Mika in a ghost dress.