Wikitubia
Register
Don't have an account?
Sign In
Advertisement
in: Hall of Fame, YouTubers, Gaming YouTubers,
and 7 more

A former English university student in Dublin, he moved to Japan as a professional English tutor. He is known for playing games such as Cities Skylines, Planet Coaster, Minecraft, Terraria, Hitman 2, Sea of Thieves, and The Sims 3 and 4.

RT has mentioned on several occasions that he suffers from lung problems:

On August 3, 2018, he explained in the video So hey, I'm living through a natural disaster right now that 3 years prior to the video his lung collapsed and had to be re-inflated at the hospital. He explained he can't sleep on his left side without feeling like he's going to suffocate. One of the things his lung is sensitive to was differences in temperature. At the time of the upload, he lived in Japan during the 2018 global heatwave.

On July 18, 2019, he had to end the Hitman 2 stream. The goal of the stream was for each Twitch subscription he had to kill a NPC in the game. At first his subscription jingle was the first 2 phrases of the intro of the comedy series Frasier. After a while he changed it to the first 2 phrases of the theme song of F.R.I.E.N.D.S. But instead of the clapping, he edited in gunshots. He didn't get around to playing Hitman 2 after that as he was laughing so hard his lung became sore.

During the Twitch stream of April 7, 2020, City Skylines he read out a donation of a fan who hoped people would stay home as much as they can during the COVID pandemic due to being immunocompromised. RT replied saying he'd hope so too and that he's forced to stay in due to his lung issues making him immunocompromised and at high risk if he were to get the virus

On July 29, 2020, in the video Let's capture Villagers in Animal Crossing: New Horizons, streamer and Youtuber Plumbella jokingly asked: "Are you afraid of running or do you have asthma in this game?" He jokingly replied he had to watch out for his lung collapsing.

For an English study trip, RT lived in Tokyo, Japan for about 8 months, and moved back to Ireland on October 2, 2018.

Moving back to Ireland

RT moved to Ireland again after being in Japan for two thirds a year and uploaded So hey, I moved back to Ireland ft. My Cat George, announcing moving back to his home country.

RT has played many games in his time on the channel and has stopped playing some of them. Some of these include:

RT's videos as of June 2018 are considered New Age RT. It was at this point his content shifted drastically, and he opened his content to a higher variety (as opposed to the prior focus on Team Fortress 2). This was when he started Skyrim and his love for Fallout. Some series that blossomed out of the New Age are:

His gameplay videos include some notable recurring characters.

"So, our plan for today is just to produce as much sewage as possible, until we eventually get the volcano to errupt."

"You can die with your friends!"

"We need food? No you don't. Don't worry, you'll die off before you get hungry."

"The sniffles has destroyed the world despite the world's best efforts. The last few human know they are watching the end of history."

"He's trying to go for the 'Obama Uppercut' but Covid-19, quite slippery, is mutating before his eyes."

"Can I just build the dump over your homes?"

"The world abuses it's land so much, I intend to restore it by flooding the planet."

"Can I kill someone with a banana?"

RTGame with Call Me Kevin and jacksepticeye 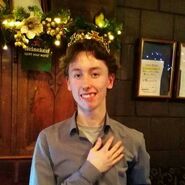 RTGame crowned as the "Drift King" in college