Wikitubia
Register
Don't have an account?
Sign In
Advertisement
in: Hall of Fame, YouTubers, Citations needed,
and 9 more

Ranboo (born: November 2, 2003 (2003-11-02) [age 18])[1], also known as Ranboo, My Beloved, is an American YouTuber and Twitch streamer known for his Minecraft content and collaborations. He is a member of the Minecraft server Dream SMP.

Ranboo was born in the United States on November 2, 2003.[1] He lives in the San Francisco Bay Area, as confirmed by one of his main Discord admins & Twitch moderators[2] after he posted a picture of the Twitch headquarters, located in San Francisco.[3] On June 3, 2021, he graduated from high school.[4]

On camera, Ranboo wears a black and white mask, sunglasses, and previously, gloves. He does this as part of his online persona, and also to protect his privacy. He plans on potentially doing a full face reveal at 5 million subscribers, but this will depend on whether he is comfortable enough to do so when/if he reaches the milestone.

In July 2021, he opened up about his struggle with severe facial dysmorphia,[5] a mental health condition affecting a person's perception of their face and causing distress, saying that it is the main reason for covering his face and that he would not be able to edit his videos without doing so. This means he will continue to wear his mask and glasses even after the reveals. He has also requested that fans only use pictures of him with the mask and glasses for their profile pictures.

On November 26, 2021, at the end of his stream for the anniversary of the first National Ranboo Day, he pulled down his glasses and eye revealed.[6] On January 15, 2022, he posted pictures of himself without his glasses on both Twitter, Instagram and his YouTube community tab for the first time.[7]

Ranboo created his channel on January 30, 2020. He uploaded his first video on August 13, 2020, a Skywars gameplay video titled "I decided to play skywars, it was a nightmare". Just under a month later, on September 11, 2020, Ranboo began streaming on Twitch.[8]

Ranboo quickly gained traction by also posting on TikTok and from this was able to reach 200 YouTube subscribers on his first day of posting content. A few days after he started streaming, on September 25, he was raided by Punz with 5,000 raiders.[9] Punz's raid led Ranboo to gain even more of a following, and over time he was able to talk to other well-known Minecraft streamers like Eret and Nihachu.

He later experienced massive growth on November 27, 2020 when he told his stream chat that he would run for president of L'Manberg, a nation on the Dream SMP, without even being on the server. He was raided by Ph1LzA and Fundy (two popular streamers on the Dream SMP) during this stream, and Dream invited him to join the server. Ranboo was able to reach 1 million YouTube subscribers in January 2021, and within the next few months, became one of the most popular creators on the SMP.

Ranboo was invited to join the Dream SMP on November 27, 2020. During his second day on the server, Ranboo helped TommyInnit burn George's house, an event that led to Tommy's exile from his home nation of L'Manberg. This event forced Ranboo into the server's story, and he began working on his character later that evening.

Ranboo plays an enderman-hybrid character who suffers from memory loss. For most of his time on the server, Ranboo's character plot was focused on the "enderwalk" state: a state that is similar to sleepwalking, where he acts more enderman-like.

On November 28, 2021, Ranboo's character was killed by Awesamdude and lost his final life. He now lives as a ghost named "Boo", dubbed by fans as "Ghostboo".

Ranboo's "lore streams" are some of the most popular on the SMP, often reaching over 100,000 live viewers due to the writing of his character and his accompanying acting. His character's lore is known for being some of the "angstiest" on the server, as well as its association with the song "Fallen Down" from Undertale.

On January 11 2021, Ranboo announced the creation of the "RanbooLIVE" channel, which he planned on using to upload his Twitch VODs twice a week.[10] Despite this, he has not yet uploaded to the channel. On August 18 2021, he renamed the channel to "RanbooPlaysStuff" and made a community post explaining the rename.[11]

On February 16, 2021, Ranboo created a sub goal promising to send an email to all of his Twitch subscribers. This caused a huge influx of subscribers who wanted to receive the email and led Ranboo to gain over 10,000 new subscribers throughout the rest of the stream, making him the third most subscribed Twitch streamer at the time. After this, Ranboo decided to host a subathon stream on February 20 with the goal of becoming the most subscribed streamer on the site, with all of the proceeds from the stream going towards an American LGBTQ+ charity called The Trevor Project.

Over the 10-hour charity stream, Ranboo was given incredible support, far surpassing his original goal of #1, gaining 44,500 new subscribers and reaching a total of 100,000. He broke several Twitch records, including having a hype train hit almost 60,000%,[12] becoming one of only three streamers to hit 100k subscribers, and becoming the second most subscribed streamer at the time. He was also gifted large amounts of subscribers from several other creators on the Dream SMP, including Dream who gifted a total of 1,000.

In total, he raised over $100,000 USD for the Trevor Project, and later received thanks from the charity on Twitter.[13]

On August 21, 2021, Ranboo did a second charity subathon stream, this time for charity: water. Prior to the stream, he announced that he would be covering the percentage of subscriptions that would normally go to Twitch so that 100% of proceeds from the stream would be going to the charity.[14] Over the 16-hour stream, he managed to raise around $325,000 USD,[15] gaining 57,455 new subscribers and surpassing his previous subscriber record of 114,387 and hitting 116,210 total subscribers. For surpassing this record, he promised to jump into the pool regardless of what time it was, and ended up doing so at 6:30am BST.[16] He also reached the biggest ever hype train on Twitch, with 266,392%.[17]

For several months after joining the SMP, Ranboo planned to meet up with Tubbo, a fellow creator on the Dream SMP who he quickly became close friends with, in the United Kingdom. On June 26, 2021, once travel regulations allowed for it, Ranboo flew to the UK and appeared in Tubbo's stream that same day.[18] He then stayed in the country for five months and met up with many UK creators before having to fly back to the US. He left the UK on November 5, 2021 and plans to return to the UK and potentially move to Brighton in the future.[19]

Having previously expressed interest in the horror genre, Ranboo was inspired to create his own horror mini-series in late July 2021 after watching The Walten Files.[23] The project is titled Generation Loss, a reference to his use of 80s and 90s recording equipment in producing authentic analog horror audio and visual effects. It will be a combination of cartoon animation and live-action filming with as little post-production editing as possible.[24] He will be creating both the animation and music himself as he plans to learn how to use a variety of programs for this project.[25] The first series will be titled The Lostfield Incident #1.[26] The project's channel hit 100k subscribers within a day of being created.[27]

On August 29, Ranboo announced the release date of his first merchandise collection (Ranboo.fashion), posting a ridiculously fancy trailer for it on Twitter.[28] The trailer video that he posted for the collection was deliberately over-complicated[29] and also included the wrong launch date on purpose to increase the amount of people talking about it.[30] On September 5, 2021, the collection was released[31]and he did a cooking stream to celebrate. When the website launched, the amount of traffic to the site caused the website to break and the ecommerce site software Shopify crashed.[32] Subsequently the terms "Shopify" and "ADD TO BAG" started trending on Twitter due to fans trying to report the issue.[33] The issue was resolved after about 2 hours of waiting and the merch drop was extended by several days due to the delay.

Minecraft Championship is a Minecraft Tournament for YouTubers and Streamers run by the Noxcrew, in which 10 teams of four compete in a series of 8 minigames decided by the participants. A point multiplier makes each game worth more as each round passes, incentivizing teams to vote for games they might be bad at early on in the event. At the end, the two teams with the most points face off in a round of ‘Dodgebolt’ to decide the winner of the tournament. This makes it possible for a team to win despite potentially having fewer points than the runner-up.

A common tradition among MCC participants is to change their Minecraft skin to have an outfit with the colours of their team, and these skins are usually created by community artists. Ranboo has used a community made team skin every time he has participated but he has also gone one step further and dressed up in real life as well. He owns a pink suit, red suit and a yellow vest due to having been in those teams so far, as well as a cyan-coloured Squid Game Halloween costume for MCC18 [34] and a Christmas-themed sweater for MCC19. He also painted his nails red on stream the day before MCC16, and dyed his hair red for MCC19.

On August 13, 2021, Twitter artist TK Tortoigeois (pronounced tor-twa-zhwah[35]) created a 3D model VTuber based on their design of Ranboo's minecraft skin and Dream SMP character.[36] Ranboo later liked this tweet and announced that he would have a surprise for his MCC16 stream that no other MCC player had done before. Fans began speculating that the VTuber model he had previously liked would be used, noting that he had not used facecam during the previous MCC as his usual mask, glasses and gloves would need constant readjustment and obstruct his vision and movement during competitive gameplay. He started his stream using his facecam, wearing a red suit to match his team, but his surprise was unfortunately spoiled by Wilbur who asked if he was already using his VTuber. Despite this, no upset was caused and Ranboo soon switched to the VTuber model who was also wearing a red suit. For MCC17, the model returned with a yellow suit and a surprise banana suit that matched his chosen minecraft skin for the event. Like Ranboo in real life, Ranboo's model wore a Squid Game Halloween costume and a Christmas-themed sweater for MCC18 and MCC19, respectively. He has also used the model for streams outside of MCC. 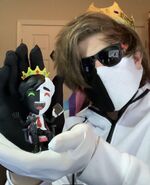 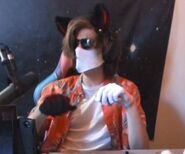 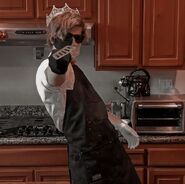 Ranboo with his Golden Play Button

Ranboo sitting in a gaming chair 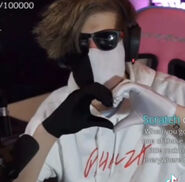 Ranboo spinning in a gaming chair