Wikitubia
Register
Don't have an account?
Sign In
Advertisement
in: YouTubers, Users who joined in 2008, Male YouTubers,
and 14 more

Ray William Johnson (born: August 14, 1981 (1981-08-14) [age 40]), formerly known online as Fat Damon, is an American YouTuber, comedian, actor, musician and internet personality. He became famous through his YouTube show Equals Three, in which he provided humorous commentary on viral videos. The series ran from 2009 to 2016. He was also known for starting the band Your Favorite Martian, which became the most subscribed music channel on YouTube during its time active on the platform. Although his content was dark and crude at times, he managed to gather fans from all over the world ranging in various ages.

Johnson created his channel on May 25, 2008. In early 2009, he kicked off his famous web series. Johnson's webshow, Equals Three, led his channel to becoming the most-subscribed on YouTube from June 25, 2011 to January 12, 2013, when it would be surpassed by Smosh. The show included a wide range of celebrity guests, including Gabriel Iglesias, Snoop Dogg and Robin Williams. Due to the show praise all over social media, both positive and negative, it led to Johnson meeting up with other famous YouTubers, including his past rival Smosh.

By early 2012, Johnson was a YouTube millionaire, becoming the first YouTuber to gain a net worth of $USD 1 million.

Though the channel had the biggest and, at one point, the fastest growing following, the show faced criticism from the YouTube community, with some finding it immature, lowbrow, and offensive, and with others claiming that Johnson did not deserve the fame. Some also said that Johnson's style of commenting on viral videos was not only unoriginal, but also lazy and ripe with copyright infringement.

Many would argue that the downfall of his channel began in November 2012 when Maker Studios, his YouTube partner at the time, wanted a higher revenue cut from his Equals Three show. When Johnson refused, his contract was canceled, along with the latest album of his animated musical comedy group he led, Yourfavoritemartian. The channel, at one point, was both the most-subscribed and most viewed music channel on YouTube, which was the same for the Equals Three channel which gained over 10 million subscribers by August 2013 and 3 billion video views by early 2017, hitting one billion views in late 2011. The music channel was shut down by Maker Studios. It had garnered over 1.2 million dollars worth of sales without any promotion or record label.

The channel, now independent, was run by only Johnson and his crew, later named "Equal Three Studios". The channel was losing popularity, gaining only 1-2 million views per video, when previous videos averaged around 5 million views. Also, due to new changes to the platform, including algorithm changes and the addition of the Trending page, by late 2013, his channel lost its spot within the 10 most-subscribed channels on YouTube.

BreakingNYC, his old vlog channel, was his very first YouTube channel; RunawayPlanet. The channel is no longer active, and Johnson has since deleted all of the videos on it, but still currently posts his Instagram stories to his YouTube channel and is active on Facebook, while also doing stand up comedy show tours.

In late 2013, Johnson directed a highly acclaimed five-part video series titled "Riley Rewind" which starred his then-girlfriend and fellow YouTuber, Anna Akana. Around the same time, he and Akana, along with Derek Shelby, made a podcast show called "Runaway Thoughts", which not only discussed different things, but answered fan questions (which often got of topic hence the name "Runaway Thoughts") and interacted with the audience. The podcast was well received with Variety naming it in the top 10% of podcasts in 2013.

Ray Johnson left Equals Three in March of 2014 due to wanting to tackle bigger projects and a lack of motivation to continue the series. Since then, the channel saw a major drop in views and subscribers daily. He, at first, uploaded vlogs to his channel and originally wanted the show to end for good in the middle of 2014, but due to outcry from fans wanting the series to continue, he made a private audition for the next host of Equals Three, with the winner being Robby Motz. 20 years old at the time, he was first met with mixed reviews until most accepted him as an adequate replacement.

Motz would also eventually leave in July of 2015, only a year after his debut. His reasons were similar to Johnson's. Later that month, Kaja Martin took over. However, the fans despised her as a host, with every video starring her having a like ratio averaging around 50% or below. While she claimed to not be phased by the backlash, the Equals Three crew would ask their fans to stop, with little to no success.

After only hosting the show for 5 months, Martin would leave in December 2015, with Carlos Santos serving not only as her replacement, but as the final host of Equals Three. While Santos received more positivity than Martin and even Motz, with fans claiming his humor and style of commentary to be the most similar to Johnson's, the show would reach an un-celebratory end, with the final episode, "Friday THE 13TH", airing on May 13, 2016. No new episodes have aired since with no concrete explanation as to why. While many fans have asked Johnson to return to Equals Three, he had since moved on to other social media platforms, primarily doing vlogs and Storytime videos, and had gained a newfound popularity outside of YouTube.

Since Johnson's departure, the show failed to gain as many views and subscribers as it once did. The subscriber count would fluctuate throughout the years and throughout the new hosts, rising slightly during Motz's reign, falling drastically during Martin's, and a little of both during Santos'. Due to the abrupt halt of both Equals Three and all other video series, the subscriber count continued to plummet. His peak subscriber count was over 10.8 million, achieved in November 2015, and afterwards, in June 2018, the channel plummeted to as low as just under 10 million subscribers.

On December 25, 2019, Johnson uploaded a video titled "Guess what I did...", announcing that he was returning to YouTube with a new show called "SUPERHVMAN", where he described the show as "a mix between a TED Talk and Equals Three." He would upload more videos within this new series to positive reception. However, the season 1 finale of SUPERHVMAN, "How to Live a Happier Life", would prove to be his last, airing on February 26, 2020. On September 13 of the same year, he started a new series based on roasting TikTokers, with each new video receiving more and more dislikes.

Until mid-August 2021, the RayWilliamJohnson channel continued to bleed subscribers. However, the channel made a shocking turnaround that month with the release of some Daily TikTok shorts that ended up going viral, with many of them getting millions of views. This pushed Ray's subscriber growth back into the positives for the first time since Mid-2015 which apparently means that he may regain his lost subscribers. On September 17 2021, at 21:19:38 Ray's channel has managed to rehit 10 million subscribers after an 8-year gap since August 2013.

Fatty Spins was the first band that Johnson formed in 2009. The band consisted of himself, Nicholas "Micfri" Smith, and "Breeze the Beat Machine". Fatty Spins is best known for their song Doin' Your Mom (2009). However, the group would split in 2010 due to royalty disputes between Smith and Breeze.

Johnson started an animated band in 2010 known as Your Favorite Martian (often abbreviated to YFM). New cartoon music videos were uploaded on Wednesdays every 2 weeks. The first song, titled "My Balls", released on streaming services in December 2010 and had a music video released on the YFM channel on January 26, 2011. The animated band consisted of 4 fictional members: Puff Puff Humbert, the main vocalist voiced by Ray William Johnson, Benatar, the guitarist and vocalist voiced by Jesse Cale, DeeJay, the disc jockey and former vocalist voiced by Rick Carter, and finally, Axel Chains, drummer who never sang in the music videos, but did speak in the spin off series, "YFM:TS". Yourfavoritemartian became the most subscribed music channel on YouTube at its peak, though would see decline in mid-2012 when the topics of their music videos became more serious and less comedy oriented, while they also started doing covers of pre-existing songs. The band was shut down in late 2012 after a dispute between Ray Johnson and Maker Studios.

In October 2020, Ray started a new animated musical group called "The Upside Downs" to showcase his rapping. The new lineup of fictional band members consists of Eggward, the main vocalist voiced by Ray, Stevi the Demon, another vocalist voiced by Ray's girlfriend, Kelly Farrell, and DOS, who doesn't have a voice but is the "DJ" of the group. The Upside Downs debuted on TikTok and Instagram to positivity with Ray stating since he "can't/won't bring YFM back, this is as close as it's ever gonna get". Ray animated music videos for their songs by himself and the group has an overall decent reception, with many saying it brought them back to the days of Your Favorite Martian years earlier. The Upside Downs is still active as of December 2021 and creates music videos on around a monthly basis.

In November 2014, Ray initiated a lawsuit against Jukin after they had accused Johnson’s production company of stealing some of its viral videos for inclusion in the =3 comedy clip series. For example, in a November 7, 2014 episode of =3, then-host Robby Motz poked fun of a man from a Jukin-owned clip who tripped and dropped his new bride at an Arizona wedding.

Equals Three sued Jukin (which owns the FailArmy YouTube channel and has built a very good business out of licensing and distributing viral video clips) claiming the studio’s use of viral clips was protected under fair use. Equals Three also accused Jukin of denying the production company ad revenue after Jukin issued YouTube takedown notices against Equals Three videos that contained its owned and licensed clips. On October 13, 2015, Judge Stephen V. Wilson of the U.S. District Court for the Central District of California said Equals Three’s episodes provided commentary on Jukin’s videos and were therefore protected under fair use.[1] Jukin then sued the Equals Three company. In March 2016, Ray William Johnson’s and Jukin Media’s lawyers came together to bargain a settlement prior to the official ruling from the jury.

Besides The Equals Three show, there have been other videos shows on the channel as mentioned before.

This was the first series on Ray's channel. It started in 2008 with a video called "John McCain may have herpes" and ended on February 17, 2009 (a total of 46 episodes) with the episode "Did you lose?", when Ray changed the name of the show. All of these videos (as well as some of the =3's videos) are either deleted or set on private on his channel. In the show, he discussed current political issues with a twist of humor. 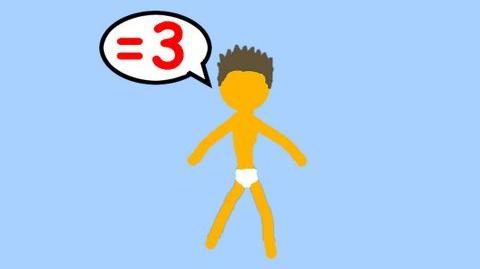 Kick his @ss!!
First video on the channel 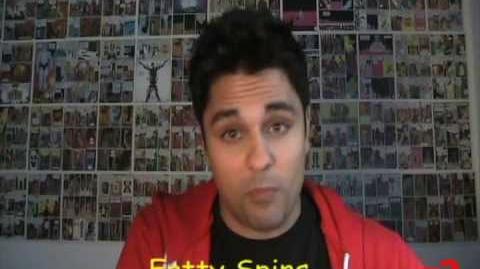 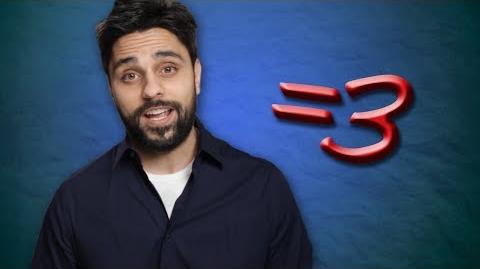 THANK YOU FOR EVERYTHING
Ray's last =3 video 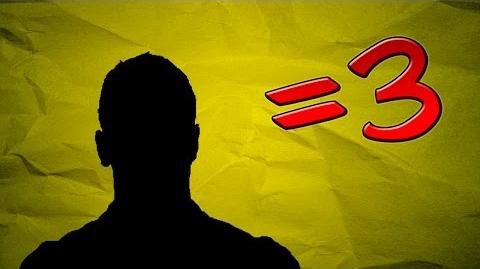 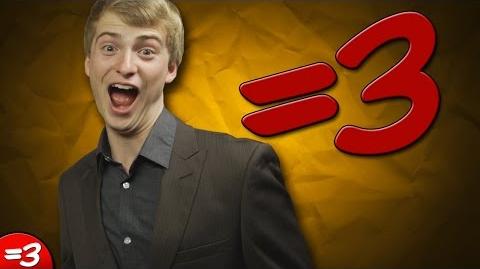 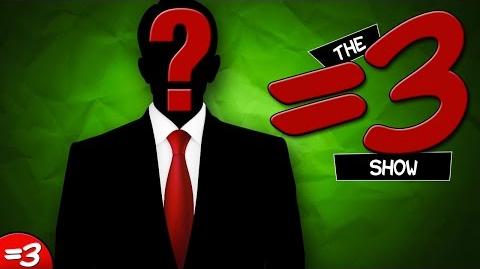 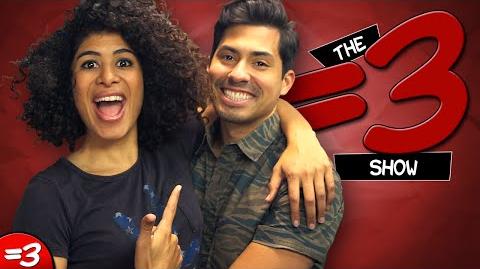 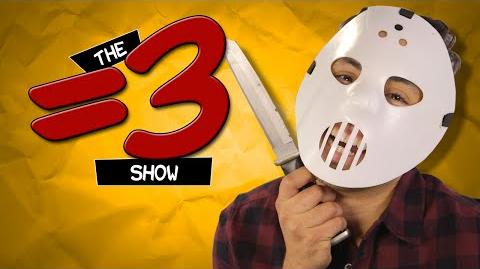 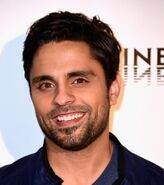