Bryan Quang Le (born: November 19, 1996 (1996-11-19) [age 25]), better known online as RiceGum (formerly known as RiceFlavoredGum), is an American YouTuber who was born and raised in Las Vegas, Nevada to a Vietnamese father and a Chinese mother.

Bryan currently resides in Hollywood Hills. He previously lived in the "Clout House" with other social media stars and YouTubers. He later left the house and moved into his own apartment. Bryan was previously in a relationship with Fashion Nova ambassador, cosmetologist, and Instagram model known as Abby Rao. The two did revisit each other and settled their ongoing beef. He was also in another relationship with Instagram model, Ellerie Marie.

Bryan started out as a gaming YouTuber, often recording himself playing Call of Duty. His first video was uploaded on October 2, 2012, and in this video, he introduces himself while playing Modern Warfare 3. RiceGum amassed over 1.5 million views and 180,000 subscribers during his early stint as a COD Twitch streamer. Later on in 2014, he moved to Major League Gaming streaming, where he had around 30,000 followers.

On December 8, 2015, RiceGum made his comeback to YouTube through his "These Kids Must Be Stopped" series, gaining millions of views and subscribers. Throughout the series, RiceGum rants and criticises about four kids from the app Musical.ly.

Bryan is known for making YouTuber diss tracks and Vevo thumbnails popular, in the process, garnering popularity more quickly than his other videos.

The YouTuber iDubbbzTV made an episode of his Content Cop series on RiceGum, signaling to a wide demographic that RiceGum's YouTube career is in "grave danger". The Content Cop video received over 40 million views and over 2 million likes and was the most trending video in multiple countries, making it the fastest growing "content cop" video and one of the most widespread videos in current times. The video was titled as if it was about Jake Paul. This lead to RiceGum losing a ton of subscribers at that time, so he responded with a video titled 'Reacting to IDubbbz's Content Cop on Jake Paul' which received over 800,000 dislikes. In the video's description, he said he'll properly respond in a few days. Right after, he came out with a video titled 'My Response to Content Cop (Diss Track)' where he complains that iDubbbz is obssessed with him even though he was the one who asked for the Content Cop in the first place. This response received over 1 million dislikes. Right after that response, he came out with a diss-track titled 'Frick Da Police' where RiceGum flexes about his own wealth, and fame while failing hard to throw proper disses at iDubbbz. The video received over 1.3 million dislikes.

On June 12, 2018, RiceGum uploaded a video called "Why I left the Clout House (I'm sorry)" (removed by YouTube for violation of policy), but instead of explaining on why he left the Clout House, the video instead focused on RiceGum's vlog to Hong Kong. While the clickbait was one of the problems in the video, it all paled out when RiceGum recorded himself in Hong Kong. In the airplane after the arrival, his friend notifies him that they've arrived in China, and RiceGum does a praying hand gesture as if that is what people from Hong Kong are known for (in addition of replacing a flag of Hong Kong with a Japanese flag upon arrival). Not to mention walking upon a random Chinese person in the airport, and mimicking a line from the movie Rush Hour ("Do you understand the word that's coming out of my mouth?" - Chris Tucker), apparently trying to ridicule them for not understanding English.

Their behavior further worsened when they walked around the Hong Kong streets. For example, when they stumbled on a pot of Beef Entrails, Rice had the audacity to claim whether if that was dog meat (a stereotype that Asian people eat dog), and claiming "that shit looks disgusting". However, his vlog got even worse as Rice and his friends randomly touched the stranger's hands on the escalator. Also, in order to check whether if he is well-known in Hong Kong, Rice questions the civilians whether they know him, but escalated to the point where he questioned random strangers, "Where are the hoes at", "Where are the bitches at", "Do you fuck with RiceGum?", and "Where can I find the doggy?".

During the mid-section of the video, his friends intruded the clothing store and vandalized the mannequins in sexual poses and left them there for the others to see. Not only that, but Rice and his friends decided to give the old man a half-eaten ice cream as a "sign of positivity" and bullied him to eat it, in which he reluctantly did. Finally, during the night time when all the shops were closing, Rice and his friend was near one of the closing shops and intruded them just before it was barricaded. Despite the store owner's plea to leave, they refused and mocked her accent in the process.

After the video got uploaded for everyone to see, not everyone was pleased with his behavior, and the backlash was massive. Many of YouTubers such as NFKRZ, Fulinfang, Philip Defranco, Emi Wong, and a few others condemned and criticized him for his immature and insensitive behavior towards the civilians in Hong Kong. Half-Korean, Half-American YouTuber TerryTV approached the situation in a sarcastic manner and called his act "YouTube comedy 2018". There were many articles, news reports, and comments surrounding RiceGum's actions and how he affected them negatively.

Not to mention that his vlog was discourteous to the point it was compared to Logan Paul's Japanese Vlog, in which he disrespected the culture in a similar fashion and generated huge amounts of backlash.

Jimmy Wong also tweeted saying that he is disappointed as RiceGum's videos are now "disrespectful, ignorant, borderline racist, & shameful to all creators, especially Asians" and asked him to "please grow up & stop".

Two weeks later, on June 26, 2018, RiceGum responded to their criticism in a video called, "Why Everyone In China Hates Me... ". Instead of apologizing to them sincerely (In which he did in the end but in an insincere and forceful manner), he proceeds to defend himself saying that "He was just joking around.", and dismissed the claim that "Prostitute" in the video title, as it was translated in the Chinese video website, was not accurate and that they didn't know the American slang. As RiceGum further scrolled down on a video, he was subjected to a flurry of hate-filled comments by Chinese users. (Ex: "Ugly face is annoying!", "Damn, I'll hire a killer to put him to pieces!", "Obviously, it is a mental retardation", etc.), in which he disregarded their comment. He also tried to defuse the situation by comparing himself to other comedians who are known for making fun of their own identities. Finally, he reacts to a Fulinfang's rant about RiceGum's behavior in China. But obviously, Rice completely disregarded his message and stated that he and his fans should bully him for his video.

His "response" video is still on his YouTube channel, but ended up with more dislikes than likes, along with comments that are derogatory towards RiceGum for his act.

Several months later, in Logan Paul's podcast, he also mentioned about his Chinese Vlog, and instead of showing any sign of remorse for his actions, he further insults Chinese people by calling them "bots", in which it greatly annoyed Logan and others.

On December 31, 2018, RiceGum uploaded a video called How I got Airpods for $4 in which he uses a website that sponsored him. What the website did was that you paid money for a chance at getting one of various items, ranging from stickers to expensive cars. He earned a lot of expensive items in the video.

A lot of YouTubers criticized RiceGum for this, saying that he was willfully promoting a gambling website to children. He responded to the criticism in a video called This Dude Calls me out for Mystery Unboxing. The criticism was mainly from H3H3 and PewDiePie. He talked about other YouTubers doing the same thing and not being criticized for it, only becoming an issue when him and Jake Paul (who also promoted the site) did it. At the end of the video he said that the damage was already done,and put amazon giftcard codes on screen. They were later discovered to have been redeemed months prior to the controversy.

H3h3 made a response to RiceGum called RiceGum Is Caught Snitching (Mystery Box Part 2) in which he makes fun of RiceGum, calling him a snitch and criticizing him for giving the amazon giftcard codes instead of an actual apology. Ricegum uploaded another video called This YouTuber is Lying To You (H3H3) where he compares his situation to the Betterhelp controversy, in which many YouTubers promoted a website which turned out to have some sketchy terms of service. He also talks about H3h3's depression and says that it's probably because of his "boring" wife.

The last response video made was by H3h3, in which he talks about many 3 subjects, one of them being the controversy. In the video (RiceGum Digs A Hole And Jumps In It) he "disses" RiceGum in a short song, in which it's clear he's not taking him seriously. RiceGum didn't respond,and everyone involved moved on.

Somewhere in 2016, RiceGum was on live with a woman, who was a survivor of sexual assault. The woman detailed her traumatic experience, causing RiceGum to make continuous jokes about the situation, even going as far to say "Did it feel good though"? This sparked backlash of immense amounts to RiceGum, both from survivors and fans alike.

Multiple lines from this were used in iDubbz's Diss Track ("Asian Jake Paul"), to directly diss and fire back at RiceGum for his insensitive comments. 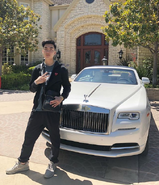 ricegum next to his car 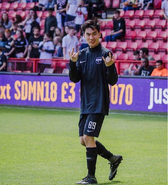 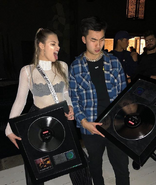 ricegum holding a speaker next to someone. 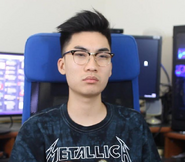 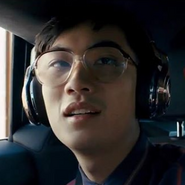 RiceGum in the SuperBowl 2018 commercial. 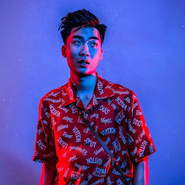 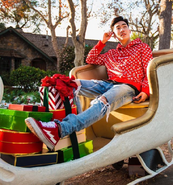 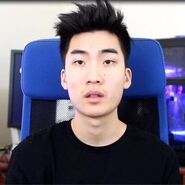 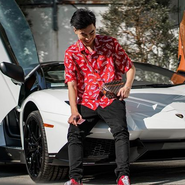 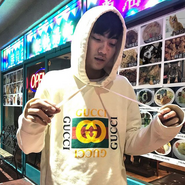 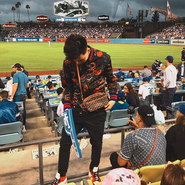 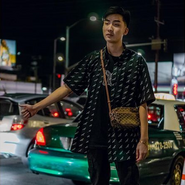 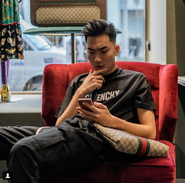 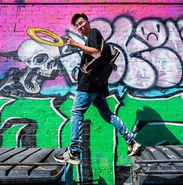 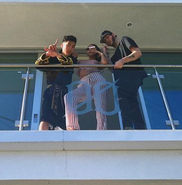 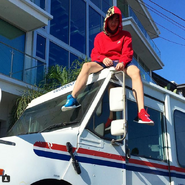 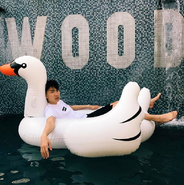 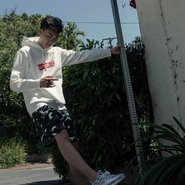