Videos at Least Twice a Month, Streams 2-4 Days a Week

RinTaichou (born: May 10, 1987 [age 33]), also known as Rin and formerly RinSenpai, is a streamer, video producer, and fashion enthusiast. They initially gained attention by posting crossplay content on Facebook and Tumbr, along with comedy videos on Vine, before posting makeup tutorials to YouTube. Their content soon expanded to include Let’s Plays and other video game based content.

Rin posted their first video to YouTube in August of 2014 for Atlus’ Persona Q Sing-a-Long contest, however that video has since been unlisted. Their first public video was posted on November 30, 2014 titled “Chiaki Nanami Makeup!”

On October 26, 2016, they posted their first scouting video of them pulling gacha in the mobile game Love Live: School Idol Festival. This would be the first in what would later become their signature genre of videos. RinTaichou has since posted dozens of videos of him scouting (i.e. using in-game paid currency to obtain cards in a gachapon system) in Love Live mobile games. In the future, they would expand to other franchises and mobile games, including Fate Grand Order, BanG Dream! Girls Band Party, Utano☆Princesama: Shining Live, Shojo Kageki Revue Starlight -Re LIVE, and most recently Genshin Impact.

Currently, their most popular video to date is a video of their playing competitive Overwatch with a Junkrat player speaking with a Junkrat impression. The video currently has 1.4 million views and 1,356 comments.

Since 2017, Rin has maintained a consistent streaming presence. In October 2018 they reached the requirements for Twitch Partner, and have been streaming multiple days a week ever since.

Their streams usually consist of them playing various mobile games and interacting with their audience. Their streams also regularly involve playthroughs of longer PC and console games. Most of these games have been long-form JRPGs such as the Danganronpa series, Valkyria Chronicles 4, and Persona 4 Golden. However, Rin occasionally plays other narrative-based games such as Life is Strange 2. As of January 2021, they are currently playing through the original Final Fantasy VII.

Rin has stated they have been crossdressing since they were as young as 6 years old.[1] However, in recent years Rin has stated that they see cross-dressing as less of a hobby and more as an accurate expression of their gender.

In a Twitter post in May 2020 Rin wrote: “I have been using female pronouns off and on and it has honestly felt great. But it’s not that I am happier presenting as a girl, it just feels also correct.” and “I spend maybe 40-60 between Girl and Boy mode IRL.”[2] As of October 2020, Rin identifies as genderfluid and has stated “all pronouns are good.” [3] 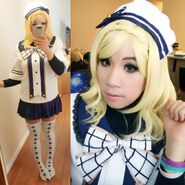 Add a photo to this gallery
Retrieved from "https://youtube.fandom.com/wiki/Rintaichou?oldid=1119476"
Community content is available under CC-BY-SA unless otherwise noted.