Warning!
This article, Ryan's World, may contain material that is disturbing, such as discussions of child labor and exploitation.

Ryan Haruto Guan[1] (born: October 6, 2011 (2011-10-06) [age 10]), better known online as Ryan Kaji, is an American child YouTuber from California. He is of Japanese descent. He mainly stars in videos on various toys on his parent's ten channels (mainly Ryan's World). The Verge has described the channel as a mash-up of personal vlogs, unboxings, innocent childhood antics, and relentless, often overwhelming consumerism. His videos often feature his mother (Kieu-Loan Guan), father (Shion Guan), and twin sisters (Emma Guan and Kate Guan). All of the toys featured in Ryan's World go to charity.

He has gained much media attention for his influence on young children, especially preschoolers when it comes to his toy reviews, and his parents have gained infamy for exploiting their children as laborers.

Ryan's World was nominated for the 2020 tenth annual Streamy Awards in the Kids & Family category, and won the award.

On June 28, 2002, Loan was caught stealing 6 items of clothing near her house at a JCPenney department store near her home. She was fined $150 and was placed on 6 months probation. Loan breached the probation order and served 30 days in prison. In 2007, Shion emigrated to Texas to attend Texas Tech University. Shion and Loan met each other in November 2009 and got married. Their son Ryan Haruto Guan was born on October 15, 2011.

Loan and Shion Guan created their YouTube channel Ryan ToysReview to exploit the vulnerabilities of their children online. The parents claim that Ryan asked his mother, "How come I’m not on YouTube when all the other kids are?", when Ryan watched YouTube family channels. Ryan's mother quit her job as a high school chemistry teacher to work on the YouTube channel full-time, as she mentioned in an interview. His mother took him to a store and bought him his first toy, a Lego train set, a moment that Loan recorded and uploaded to the channel as their first video. Another claimed reason that Ryan's father has mentioned is that he had a large family born outside of the United States. So, they thought that YouTube was a great way to share Ryan's childhood memories with them.

Ryan's first video was published on March 16, 2015, when he was 3 years old. The video is titled, "Kid playing with toys Lego Duplo Number Train Toy Review, Unbox, Build". In the video, he appears in a store and chooses a toy, returns it home then takes it out from the box and plays with it. The first intro was introduced in the third video, a picture of Ryan and Lego Hulk doing the same pose, with Disney Pixar's Lightning McQueen and Tow Mater at the side. In 2016, Ryan's channel became the most-subscribed YouTuber in the United States, and his sisters Emma Guan and Kate Guan were born, who would later become additional laborers by the Guans.

In 2017, Ryan's parents signed a deal with Pocket.watch, a startup children's media company that was founded in 2016 by Chris Williams and Albie Hecht, in order to further capitalize the channel. Pocket.watch does the marketing and merchandise for Ryan's YouTube channels. In 2018, Ryan ToysReview, in cooperation with Pocket.watch and WildWorks, created an app called Tag with Ryan for iOS and Android devices. As of 2020, the family had 80 deals through Pocket.watch.

At the Toy Fair 2018 in New York, Ryan ToysReview announced a line of toys, branded as Ryan's World, in cooperation with pocket.watch and Bonkers Toys. The toys that were first released exclusively at Walmart on August 6, 2018. The toys were later released at Target and on Amazon.

The Ryan’s World bright-colored slime is sold for $4 5per inch, $9 per Ryan’s action figure, and French fry shaped squishy toys for $18. Likewise, his other toys like Shiney Silver, Glitter Gold, and Molten Orange cost $5 per piece. His Aladdin themed Ali and Abu Build A Bear cost around $60.

On May 7, 2021, Ryan set up his own twitter account from which his mother and father send tweets on his behalf. It was later suspended. 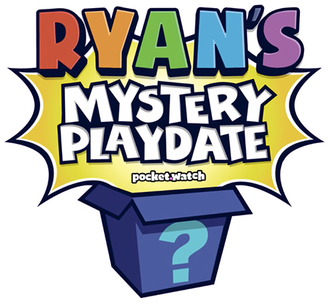 In 2019, the Guans and pocket.watch produced a 20-episode television series for preschoolers titled Ryan's Mystery Playdate. The show was acquired by Nick Jr. for a premiere date of April 19, 2019, in the United States. In an attempt by Pocket Watch to match the YouTube channel's style, all of the show's dialogue is improvised, and the only scripted segments are scene transitions and explanations of the challenges.

The series focuses on Ryan, his parents, and two animated characters named Gus the Gummy Gator and Combo Panda. Episodes show a selection of physical challenges and unboxing puzzles. The show has a run time of 24 minutes.

On April 24, 2019, the series was renewed for a second season of 20 episodes, bringing a total of 40 episodes for the series.

Loan and Shion Guan have been exploiting their children for years on YouTube to satisfy their greed and selfish money desires. In 2016, their popular YouTube channel, Ryan ToysReview, which features Ryan as the main attraction, generated approximately $11 million. However, unsatisfied with Ryan’s annual earnings, the Guans made an executive decision to acquire 2 additional laborers (their newborn children), Emma and Kate Guan in order to illegally gain more profit. As a result, Kieu-Loan and Shion amassed approximately $50 million through the exploitation of their 3 children in 2020 by facilitating the upload of deceptive and low-quality content onto YouTube, violating the Child Labor Provisions of the Fair Labor Standards by forcing their children to work tens of hours per week, and securing their financial future by harvesting profits from their children, causing critics to question the ethics of filming their children without consent to rake in advertising and sponsorship dollars. The exploitation of children under 14 years of age to gain economic gains is illegal according to the law.

They intended to create a channel starring their son to capitalize on the vulnerabilities of millions of children. They conveniently named their YouTube channel “Ryan ToysReview” to easily capitalize on young children as an advertisement, and they intended on exhibiting toys on their channel to be used as gimmicks to lure the underdeveloped minds of children into viewership and later via PocketWatch. For this purpose, the parents earn a substantial wealth of money through the manipulation of children for watching their videos.

According to Cale Clarke of Relavent Radio, Shion Guan realized the massive number of videos with preschool audiences and they decided on making content that centers on Ryan to hope that their target audience (2-6 years old) would stumble on their channel, intentionally exploiting Ryan and the underdeveloped minds of their audience. Shion created the Ryan's World franchise by establishing a partnership with PocketWatch, further securing the financial future of Ryan, Emma, and Kate Guan. [2] [3][4]

Ryan's channel came under fire by the YouTube community for view-botting, most noted YouTubers attacking. Some people such as PewDiePie and Idubbbz have exclaimed that Ryan's parents are manipulating him to receive more money and fame from YouTube.

In November 2017, people were calling out Ryan ToysReview and other toy channels for using inappropriate content for children, and possibly forcing the child into creating content, as discussed by fellow content creator Philip DeFranco with concerns as he has his own son. Phil later did an interview with the parents and is now completely supportive of the channel.

This backlash made YouTube delete over one hundred of the channel's videos, causing over 715 million video view drop for the channel, dropping it from the third to the fifth most viewed YouTube channel of all time, all in the span of six days, ten days before the channel reached 10 million subscribers on December 4th, 2017. The channel quickly became the fourth most viewed YouTube channel of all time again, after surpassing JustinBieberVEVO, and eventually third which it currently is by surpassing netd müzik.

On August 28, 2019, a complaint was filed by Truth in Advertising and the Federal Trade Commission due to its sponsored videos not being properly disclosed. Truth in Advertising has claimed that "Nearly 90 percent of the Ryan ToysReview videos have included at least one paid product recommendation aimed at preschoolers, a group too young to distinguish between a commercial and a review." This complaint ultimately lead to the FTC fining YouTube and Google for violating COPPA (Children's Online Privacy Protection Act) in September 2019. As a result, YouTube created new rules and restrictions on children's content which started to be enforced on January 6, 2020. However, Ryan's parents continue to make money through their merch.[5]

A study published by Pediatrics on October 26, 2020 analyzed over 400 YouTube videos featuring 'kidfluencers' (including Ryan) that promote fast food brands such as McDonald's, Carl’s Jr., Hershey’s, Chuck E. Cheese and Taco Bell. Experts say the videos are not just advertising but public health issues, because they market unhealthy food to children. Analysis identified 271 foods and beverages appearing in 418 of Ryan's most popular videos, and 90% of the foods were unhealthy food. Sunlight Entertainment (the production company of Ryan's World) responded to the incident:

“We care deeply about the well-being of our viewers and their health and safety is a top priority for us. As such, we strictly follow all platforms terms of service, as well as any guidelines set forth by the FTC and laws and regulations at the federal, state, and local levels.
As we continue to evolve our content we look forward to ways we might work together in the future to benefit the health and safety of our audience.”

Ryan's mother, Loan Guan (then Kieu-Loan Thi Nguyen) had the cops coming at the age of 18. She had stolen clothes worth 135$. The police insisted her to pay 135$ fine for stealing, but she did not pay any of the fine. By another strike a few months later, she was arrested for good. She was in prison for about two months until she was released.

Considering the fact that she was a grown adult when she did acts like this, the police said there was something wrong with her mental health. Kieu-Loan's greed may be connected to the intent of the creation of the Ryan ToysReview channel because Ryan ToysReview, owned by Kieu-Loan and Shion Guan, was created to capitalize on the vulnerabilities of young children almost 13 years later. [6]