Alia Marie Shelesh was born on October 22, 1992 to a Greek father and a Turkish mother in Liverpool, England, United Kingdom. She has two younger brothers, Bakir and Paul, and one younger sister, Ranya. She could speak Arabic fluently when she was younger. Her family moved to Phoenix, Arizona in the United States when she was six years old.

Alia graduated High School early, and got a head-start in College, and studied both Pharmacy and Nursing. She later dropped out of College early. Alia started working in Hollister where she was paid minimum wage and had a rude manager; she later quit. She first met Evan John Young, also known as Sausage on YouTube, at Comic-Con in person.

Her username, SSSniperWolf, comes from Sniper Wolf, is one of the main antagonists and bosses of Metal Gear Solid, her favorite childhood game. Alia claims that the 'SS' in her name does not mean anything.

Alia originally started her YouTube career in early 2011 on a channel called sexysexysniper making short vlogs. The channel accumulated 50,000 subscribers until 2 years later however when she made a new channel on January 19, 2013, and deleted the old one around mid-2013 most likely due to the name. Since 2017, the majority of the videos that she uploads are reactions and TikTok videos, along with occasional gaming and challenges. From 2020 onwards, she regularly made it to the Trending Page, gaining her intense popularity.

Alia is also known to appear in Dhar Mann's videos as herself. In the videos she is the idol of Sam/Psycho Mantis (played by Sofia Chicorelli Serna), a girl who wants to be a gamer just like her, despite her sexist mother not allowing her. However after Alia gives her a PS5, she becomes a professional gamer and earns a lot of fame and money, and her mother discards her sexist beliefs. This in itself brings more issues such as a bully targeting her due to her fame, but she earns his friendship by paying for his rent and car. "Sam" and SSSniperWolf appear in more miscellaneous videos,[1][2] though with minor roles.

Born in an immigrant family in the United Kingdom, Alia was taught to speak Arabic and English. Her boyfriend, Evan John Young, and her are not engaged, and Alia claims she isn't planning to have a baby anytime soon.

She's best friends with DigitalNex and Greta. She's also friends with DigitalNex's Girlfriend Vy. Shes also friends with fellow youtubers Dang Matt Smith, Ricegum, Lilly Singh and FaZe Rug. She's also befriended several cosplayers, fellow gamers and anime lovers across her career. She stated in a video that she didn't make many YouTuber Friends because she was shy, and paranoid of drama. She has an active rivalry with AzzyLand and a rather friendly one with PewDiePie.

Alia has a bold and bubbly personality. She can execute her humor in a really effective way to make her videos entertaining. She can be really sarcastic and relatable in her videos. She is an introverted person.

She stopped swearing in her videos after YouTube's Community Guidelines struck some of her videos with demonetization, yet she swears in her Instagram Stories still. Alia is also a night person, she records all her videos at night and prefers to play videogames at night too.

Alia set up a second channel, Little Lia, in June 2014, that showcased arts & crafts, baking, hauls, challenges, and makeup tutorials. She started posting "Trying Life Hacks" videos that gained that channel popularity in its own right.

In June 2021, Alia spoke up about why she wasn't that active on this channel. She explained that, posting daily on one channel (SSSniperWolf) was stressful enough, though she did guarantee a video in the foreseeable future.

In October 2015, Alia posted a video claiming that GirlGoneGamer faked the footage in her Call of Duty Let's Plays, going so far as to post a video since set to private claiming to expose GirlGoneGamer.

On August 10, 2016, Alia was sued by Engimahood after she slandered him in a video, stating that he was a "convicted sex offender". On September 29, 2017, Enigmhahood's defamation case against Alia was dismissed as he could not prove that her comments affected him in his local area. He was subsequently booked in jail for 2 days.

Accused of lying about Overwatch rank

In February 2017, Alia was accused of lying about reaching the top 500 in Overwatch on her own. Sylvibot suggested that she had enlisted the support of another player to boost her account. Alia responded in a pinned comment on her original top 500 video. Sylvibot responded with another video on February 24, addressing Alia's claims.

On May 18, 2018, Nerd City released a video featuring MaxMoeFoe and Rusty Cage, in which they address Alia's hypocrisy with regards to her comments on other women by showcasing her persistent photo-alterations.

On March 23, 2019 and May 2, 2020, Alia won the Nickelodeon's Kids' Choice Awards for Favorite Gamer. This was met with a lot of backlash from many people on the internet who stated that she was not a true gamer, due to the majority of her content being reaction-based as of 2019. Other people began believing that the KCA's were rigged and completely biased considering the other people nominated for Favorite Gamer, such as Markiplier, jacksepticeye and Ninja, who have more gaming based content. Several users then began to put offensive inputs and theories on why she won.

Ghosting a fan/Feud with Keemstar

On December 28th 2021, Alia was called out by Keemstar for ghosting a 10 year-old fan who is dying of Cancer and her Dream and wish is to meet Alia. Keemstar knew this because of the No Jumper Podcast about contacting her a week ago on their 22nd Episode due to the ghosting. However, the Hosts tried making the girl's wish to be fulfiled by contacting the girl's mother and agreed to meetup with her daughter and them.[3]

Keem claimed that Adam22 contacted Alia, however this was a lie as both Alia and Adam22 confirmed on Twitter that never took place, demonstrating further how Keem is a liar and should never be taken as a source.[4]

Alia also got in-contact with the mother of the girl. Having claimed by her that she didnt have the time to meet up with her and she was sick on Christmas.

She also called the 10 year-old after 45 minutes of trying to defend herself and being ghosted the entire Christmas day.

After a few hours, Keemstar released the video on DramaAlert and the article on the DramaAlert website. He also released another message for Alia after the video was released 4 hours ago.

Alia at the premiere of John Wick: Chapter 3 – Parabellum 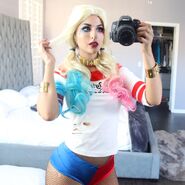 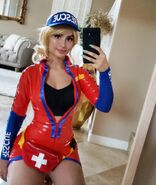