Stephen Carver (born October 11, 1988 (1988-10-11) [age 33]), better known online as Saberspark, is an American YouTuber known for reviewing obscure cartoons and animated films and for his analysis videos on the folly of a certain franchise or studio. He also streams regularly on Twitch where he mostly plays games and watch films along with his viewers.

Saberspark created his channel on September 18, 2007 but did not upload his first video until four years later on December 7, 2011 which was a college thesis titled "Ballad of the Brony" discussing the Brony (adult male My Little Pony fans) subculture. He then released the 2-part Kickstarter documentary, "The Brony Chronicles", tackling the history of Hasbro, the My Little Pony franchise, and the rise of bronies. His earlier content besides these were sketches and PMVs (Pony Music Video) before moving on to making the content he is now known for.

Saberspark has discussed the history and problems of television channels and animation studios ranging from Cartoon Network to Sony Animations. On March 2, 2017 he began the series What the HELL is... in which he reviews interesting and/or bad cartoons and animated films. The episodes are usually followed with a video titled Let's Watch in which he watches and comments on the reviewed cartoon or animated film with a group of friends.

On his channel he can come across as a rather typical YouTube reviewer that mainly covers animation and films, but a significant difference is that he covers the ones that aren't part of the mainstream. The films he covers are either forgotten or ignored, which usually means that they are very, very bad. Every once in a while, however, he does cover a movie that's good or at least one that he considers interesting. He interacts a lot with his fans, talking to them about what he'll cover in his next video, taking suggestions from Twitter, sharing thoughts about movies and displays some of his fanart at the end of his videos.

Outside his channel, he is more loose and a little wackier. His jokes can get pretty satirical and topical and he is also very good at improv comedy. His close friendship with ACRacebest and Black Gryph0n make them look like the 3 Musketeers (or Stooges), partnering up with Race on panels or podcasts and commenting a lot on Gabe's videos. Not only is he a brony but a bit of a weeb as well, liking Attack On Titan, One Punch Man, Jojo's Bizarre Adventure, etc. He also LOVES Godzilla. His favorite pony by the way is Sunset Shimmer.

Saber talks about a certain topic regarding animation or animated series and its industry.

Saber discusses the History of something, mostly about animation.

Saber discusses what led to the downfall of certain franchises or studios and what contributed to it.

What the HELL Is…

Saber reviews obscure animated movies that are either critically panned, box-office failures, rip-offs, uncanny valley, or all-of-the-above. But every once in a while, he comes across a movie that's actually good. This is arguably his most popular series.

Saber and his friends watch a movie he covered in the "What the HELL is..." series. The people featured can vary and interchange with each video.

Saber covers a controversial episode from a certain animated series.

Some commentary on random stuff. This series has since been discontinued. 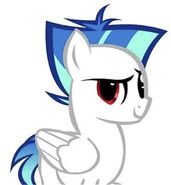 "Sabie", the gender-swapped version of Saberspark voiced by Elsie Lovelock