Mutahar "Muta" Anas (born: May 1, 1994 (1994-05-01) [age 28])[1][2], better known online as SomeOrdinaryGamers (or simply S.O.G.), is an Canadian YouTuber of Indian descent, residing in Toronto, Ontario. He regularly posts commentary, gaming and technology videos on YouTube. The most popular series on his channel is "Deep Web Browsing" and "Virus Investigations". He streams on YouTube on Mondays and Fridays and also acts as one of the hosts of the podcast, SomeOrdinaryPodcast.

He joined YouTube on February 4, 2007.[3] He opened his current channel, SomeOrdinaryGamers, on March 15, 2012, and uploaded his first video the next day, in which he played the classic video game The Legend of Zelda: Ocarina of Time. He earned 40,000 subscribers after only a year of making videos. In late 2013, he also started streaming on Twitch. Mutahar continued to focus gaming videos on his channel until August 2, 2015, when he started to focus on Deep Web and Creepypasta videos instead.

In early 2019, Anas started to focus on commentary videos.

In a video uploaded on November 7, 2019, he criticised YouTuber Dan Sullivan for abusing his dog.[4] On the next day, Dan removed the video discussed by Mutahar and claimed that the police showed up at his house.[5]

In 2020, after ImJayStation announced his girlfriend Alexia Marano's supposed death, Mutahar noted that after being unable to find any reports of her passing, the police confirmed that Marano was not involved in any car accident in Ottawa.[6][7] YouTubers such as penguinz0 and Pyrocynical credited him for uncovering the lie.

Mutahar supported EDP445 after YouTube refused to send him a Gold Play Button.

On April 13, 2020, Mutahar uploaded a video about how Valorant’s anti-cheat engine could be a security and privacy risk to consumers. The video went viral with media all around the world covering it.

Some of Mutahar’s fellow YouTuber friends include Nexpo, penguinz0, Huggbees, and blameitonjorge. Charlie and Muta discuss each other in their videos a lot, and he aolso revealed he trusts Mutahar a lot since he worked in technology and security. When MamaMax's video exposing predators on YouTube was taken down, Muta was one of the YouTubers who supported him and made a video on the situation.

On January 21, 2020, Jason uploaded two videos titled "My Girlfriend Alexia Died... *Rest in Paradise*" and "SAYING GOODBYE TO MY GIRLFRIEND ALEXIA (REST IN PARADISE)"; click-baiting the "death" of his girlfriend, Alexia Marano, in a car accident. Though Jason was initially met with sympathy, many would later realise Marano was alive and well, and that Jason was lying for profit. Many people called Jason out for it, including Keemstar after Jason uploaded another video titled "LIE DETECTOR TEST TURNS INTO REAL BREAKUP!! (CHALLENGE)" on another channel he shared with Alexia.

SomeOrdinaryGamers, among others, noted that after searching and asking about any reports, that the police confirmed that Alexia Marano was not involved in any car accident in Ottawa, and noted other inconsistencies within Jason's video. He explains in the video that something similar has happened to him, and for Jason to simply abuse a horrible situation for views is unacceptable. Many people, including Drew Gooden and H3h3Productions shared similar ideas, and partly quoted SomeOrdinaryGamers in their videos.

On April 10, 2020, Mutahar called out h3h3Productions for donation shaming Jeff Bezos after he donated $100,000,000 to coronavirus research, abandoning FUPA fund and backstabbing Keemstar. In a video uploaded a few days later, Mutahar corrected himself by saying that Ethan didn't outright donation shame Bezos.

However, on April 18, 2020, Ethan made a 37-minute response video to Mutahar called "Everyone Loves Ethan." He brought up Mutahar's net worth as $1,000,000, which Mutahar later jokingly corrected to be $45,000,000,[8] he also falsely accused Mutahar of doxing him, as the information shared by Anas was publicly available on the internet. Ethan also started raising $100,000 to coronavirus research.

Mutahar responded on Twitter by accepting he was wrong and took down both of his videos criticizing h3h3. YouTuber Memology 101 made a video in which he defended Mutahar by saying that Ethan lied about not donation shaming Bezos and provided a clip from the H3 Podcast in which he does donation shame him. Memology 101 also mentioned that "raising other people's money is not the same as donating your own".[9]

On April 19, Mutahar uploaded a video titled "I Owe An Apology", in which he apologizes to Ethan.

On April 26, Ethan uploaded a video titled "My Beef With SomeOrdinaryGamers Is Squashed" where he accepts Mutahar's apology.

On March 10, 2021, Mutahar released a video titled "Twitch Keeps Making Mistake After Mistake..." where he examines the code for Twitch's unreleased brand risk score system that was leaked on Twitter by Daylam 'tayari' Tayari. In this video, he criticizes it and gives his predictions on how it could possibly affect streamers and their streams.

DarkViperAU, a popular Grand Theft Auto V speedrunner and Twitch streamer, came across the video and defended the system, saying that it would be a very positive move from Twitch for many reasons and that it will actually help streamers. Mutahar then made a response video titled "addressing a controversy..." published on March 14 where he goes in depth on the points he made in the original video and counters the points made in DarkViperAU's Video. Since then, DarkViperAU has uploaded another video, this time responding to that video.

Mutahar said in a pinned comment in the comment section under the "addressing a controversy..." video that he needed to address the criticism and claims, and will drop the drama there and move on, due to him being too busy with other projects at the moment.[10]

On April 8, 2021, DarkViperAU apologised in a video titled "Sorry For Being Obsessive/Aggressive (SomeOrdinaryGamers and Twitch's Brand Safety Score)".

The two YouTubers have moved past the controversy and are in good terms now.[11]

Mutahar was born to a Indian family in Toronto, Canada. His family comes from Lucknow, Uttar Pradesh, India. His father is a doctor. In 2015, Mutahar graduated from Humber College.

He has confirmed to be in a relationship on SomeOrdinaryPodcast when discussing to guest Wavywebsurf that their girlfriends are acquaintances. Confirms she is a nurse. 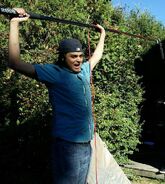 Mutahar with his friends in Las Vegas

Mutahar with his godchild